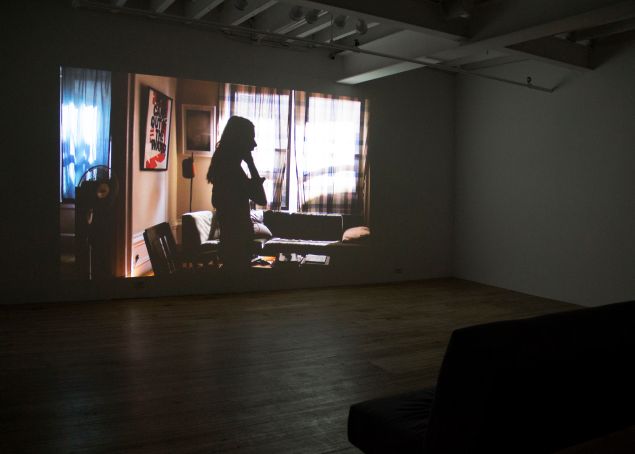 What we think of as the past has become so wholly integrated with the present, it’s hard for the human mind to comprehend their relationship to each other anymore. “Old” technology is still present, desired and even fetishized (think record players), while new technologies are so subtle and discreet (streaming movies on phones that fit into your palm), they’re barely detectable and often only pressed into service to distribute the fruits of old technology.

And though it’s hard to argue that past events are undeniably over (though subject to considerable revision) the present is constantly all around us: Unmade beds, sleeping dogs, the alcohol we’ve squirreled away for times of need. In other words, our lives as we live them.

This and more is grist for Canadian artist Moyra Davey’s thoughtful and challenging work, currently on view at the always provocative Murray Guy gallery through May 21.

Ms. Davey, who was one of the founding partners behind the boundary-pushing Orchard gallery in the mid-aughts, is known for working with less conventional gallery fare: photography, film, and even writing, and so her work, at first blush, might seem exclusionary. But it’s not—it’s quite the opposite, in fact.

There is something for everyone in this show: deeply personal narratives, material tactility, nostalgia, art historical references, pop cultural references, poetry and portraiture.

The larger front gallery focuses on Ms. Davey’s photographs, which introduce us to her intimate and quotidian meditations on time and timelessness. Take Newspaper, Coffee, 2015-16, a grid of photographs of purchase receipts for items like a magazine or an album, for instance. The photos that comprise Newspaper, Coffee were all taken with a film camera in the early ‘90s, but the negatives were scanned and colorized by Ms. Davey with a computer in 2016. As a finishing touch to the work, the artist folded, taped and then snail-mailed each photo to her gallery, leaving the address labels and colorful squares of tape in tact for display. This string of processes, which vary in currency yet are all general practice, work together to create an artistic by-product that’s strangely both obsolete and infinite.

There’s also a series of photos of photos in the show; specifically a repeated image of a “weeping wall” that was shot by the artist outside an abandoned penitentiary in Ohio in 1993. In Oozing Wall (Wings), 2014, the journalistic seriousness of the wall-sized print nearly fills the frame, but it’s amended by six postcard-size images of eyes that have been sporadically taped to its surface.

The woeful eyes, each attached with bouncy pink squares of tape, add an element of lighthearted play to the tragic subject, as does the young, sprightly girl in the right half of the frame. The darkroom prison photo, along with the youthful friend/student outfitted with homemade wings, perfectly captures the incongruous and multilayered eras of this artist’s present.

The back room of the gallery ensconces you in Ms. Davey’s film Notes on Blue, 2015, which was commissioned by Minneapolis, Minn.’s Walker Art Museum last year. The 28-minute film is a starkly beautiful, yet adamantly DIY, mashup of literary references, performances, music clips and visuals that effortlessly flit from one quirky detail to the next.

Most of the “action” simply shows the artist walking from room to room in her apartment, delivering staccato narratives into an iPhone while moving from darkened hallways to sunlit rooms and back. The topics of her commentary are personal reactions to the writings of influential avant-garde artists throughout history, from poet Jorge Luis Borges to filmmaker Derek Jarman to musician PJ Harvey. As her dog unabashedly lounges and construction workers slowly maneuver outside windows, the artist paces her home while clearly articulating “aha” moments in her artistic history. “It must be twenty years since I saw Blue. This time I pulled it up on my phone, a laptop, played a DVD on a flat screen,” says Ms. Davey about the classic Super 8 film, just one example of how she goes on to conflate very different experiences with the same work of art.

All of this is of course peppered with the artist’s autobiographical details, including a heavy passage where she humbly compares her struggle with MS to Jarman’s battle with AIDS.

It’s here we see, despite our dystopian times of improbable technology, that the tired adage “history repeats itself” still applies. People have smirked at their lazy pets for centuries, much as they’ve consistently contracted debilitating illnesses.

But Ms. Davey continues working, encountering each breathtaking new media with a shrug, before bringing it in the fold. Business as usual for an artist that can’t help but deliver gripping and delightful records of her reality. 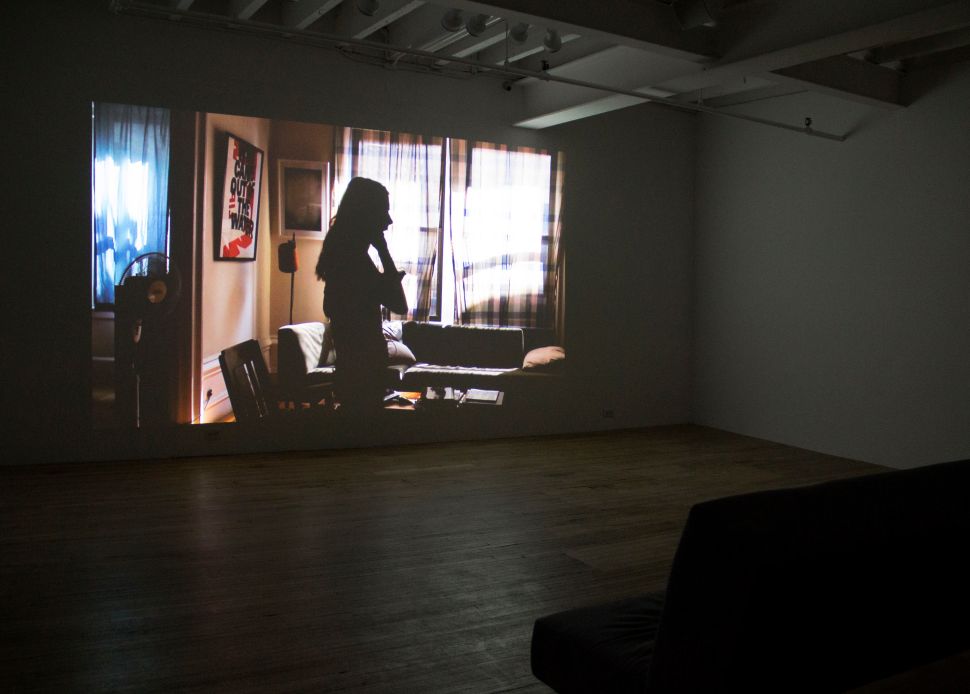