Donald Trump is the father-in-law of the Observer’s publisher. That is not a reason to endorse him. Giving millions of disillusioned Americans a renewed sense of purpose and opportunity is.

Explaining the phenomenon that is propelling the Trump candidacy is easy, despite the nattering of the cognoscenti—the media elite, the professional political class and the people largely insulated or directly benefitting from the failures of the last seven years. Their opinions have become increasingly irrelevant. For in the 10 months since Mr. Trump’s campaign announcement, their “insights” have been uniformly wrong and their influence has dwindled.

The media and cultural elite’s inability to grasp the profound alienation, anger and disillusionment of millions of Americans has fueled Mr. Trump’s popularity. The media’s enthusiastic embrace of the Obama narrative—that America should be willing to accept a dimmer future—has blinded it to the appeal of the Trump candidacy, and of an alternative, more compelling narrative.

This year, more people have turned out to vote in Republican primaries than ever before in our history. They have done so for a simple reason: they too believe that America can be great again. They have responded to Donald Trump’s singular message.

When Mr. Trump celebrated his victory in the Nevada primary, he included a line the elites found irresistible: “I love the poorly educated.” They tittered and Twittered with glee over what a buffoon these unwashed mongrels are supporting, somehow neglecting to notice that Mr. Trump won among—and thanked—just about every demographic in that caucus and in a couple dozen others as he’s clawed his way to a substantial delegate lead. It turns out that the “poorly educated” are just one group of decent, engaged American citizens who have felt overlooked by the kingmakers and storytellers.

The legacy of Donald Trump’s 30 years of leadership is everywhere—not only in the tall buildings that bear his name, but in the kitchens of the thousands of families supported by the jobs he’s created.

Mr. Trump announced his candidacy on June 16, 2015, never before having run for any political office. Three weeks later, the Economist/YouGov poll found him to be the front-runner. In the 10 months since, and despite near-universal media-bashing tinged with sarcasm and disbelief—not to mention the efforts of 16 declared Republican alternatives including eight governors and five senators—Mr. Trump has never relinquished that position.

The media tried very hard to construct excuses and rationales for his success. Mr. Trump was a celebrity, an entertainer; he knew how to play the media and gain its attention; his policies grabbed headlines but lacked the specificity of his rivals—which gave him an unfair advantage. But what every pundit’s platitudes missed was simple: they failed to recognize that Mr. Trump’s success is the result of one thing—optimism. Mr. Trump was tapping into the pent-up desire of millions of voters to make America great again.

It is not merely a political slogan; it is a vision and an attitude. It depends not on 14-point proposals or an SAT-like cramming of policy details. It depends on faith and leadership. Faith that Americans have the will to craft a brighter future, and the leadership to make it happen.

Throughout his career, Donald Trump has demonstrated real leadership. And he has done so in the private sector where people’s livelihoods depended on his vision, his decisions and his ability to get others to embrace that vision and act in concert. The legacy of those 30 years of leadership is everywhere to be seen. Not only in the tall buildings that bear his name, but in the kitchens of the thousands of families supported by the jobs he created though these projects.

We were reminded recently of how Mr. Trump first came on the public scene. It was 1986 and Wollman Rink, Central Park’s ice-skating facility was out of commission. A renovation that was supposed to have taken two years and cost $9 million had already consumed six years and more than $13 million—and there was still no completion in sight. Mr. Trump convinced Mayor Ed Koch—over a great deal of opposition—to allow him to take on the project. Mr. Trump offered to risk his own money, and only recoup the investment through more efficient operation of the facility and an adjacent restaurant.

Mr. Trump completed the work in four months and under budget. Thirty years later, it is still cited as a far-too-rare example of leadership in action, of a can-do spirit. Today, Mr. Trump’s iconic buildings, hotels and golf courses dot the landscape of not only New York, but of America and the world—testament to his ability, still, to get things done.

Critics, particularly in the media, are quick to point out Mr. Trump’s less successful ventures: Trump University, Atlantic City casinos, Trump Airlines and branded products such as vodka and steaks. Having tried (and sometimes failed) at our own entrepreneurial ventures, we are far more inclined to put these ventures into perspective. As Robert Kennedy said, “Only those who dare to fail greatly can ever achieve greatly.”

Before any endorsement is made, a full and fair assessment of the other candidates is essential. On the Republican side, that proved problematic, since it is hard to take either Ted Cruz or John Kasich seriously as prospective GOP standard bearers. Ted Cruz may be the most disliked person ever to sit in the United States Senate. And we are still wondering if his “New York values” comment was a veiled embrace of anti-Semitism.

John Kasich presents a more elusive challenge. He seems like a decent enough fellow with a record of conservative political achievements. But he’s been finishing fourth out of three candidates and his inability to gain traction with voters suggests that his candidacy is little more than a place-holder for someone the media hopes to anoint—other than Mr. Trump.

Which brings us back to Mr. Trump, not by default but by choice. We are reminded of another presidential candidate who was derided for being “just an actor” and for proposing a vision for a stronger America. Today, many people forget what propelled Ronald Reagan into the White House in 1980.

There were a small number of simple messages that resonated with voters that year, and they were universally disparaged by the media as being shallow. The first was that as governor of California, Mr. Reagan had turned a state budget deficit into a surplus. Mr. Reagan would tell voters that he was willing to sit down with both union leadership and state management and get them to talk to each other, and to find common ground in the public interest. He reminded voters that he had honed his skills as president of the Screen Actors Guild, and later negotiated better, smarter deals for the common good of the people of California.

Ronald Reagan’s second message in 1980 was even simpler. During his only debate with President Carter—yes, there was just a single debate—Reagan asked Americans: Are you better off than you were four years ago?

The latter choice, the right choice, will only be accomplished by someone who has constructed great skyscrapers and gem-like skating rinks; started businesses, written best sellers and built brands. Tried and succeeded and sometimes failed. But who has gotten up and tried again.

We have a suggestion for a Republican establishment dismayed by this unlikely candidate’s unlikely success: instead of monomaniacally focusing on tearing him down, those who care about the future of the party should reach out to Mr. Trump and help him grow as a candidate and a leader. He has demonstrated that he alone among the Republican field can attract new voters to the tent and shine fresh perspective on issues that badly need attention, such as America’s commitment to NATO and trade deals that have sailed through Congress without much debate about their effects on American workers.

In 1980 Ronald Reagan said, “The time is now for strong leadership,” and by 1984 was able to declare, “It is morning again in America.” Today, Donald Trump says it is time to make America great again. We agree. 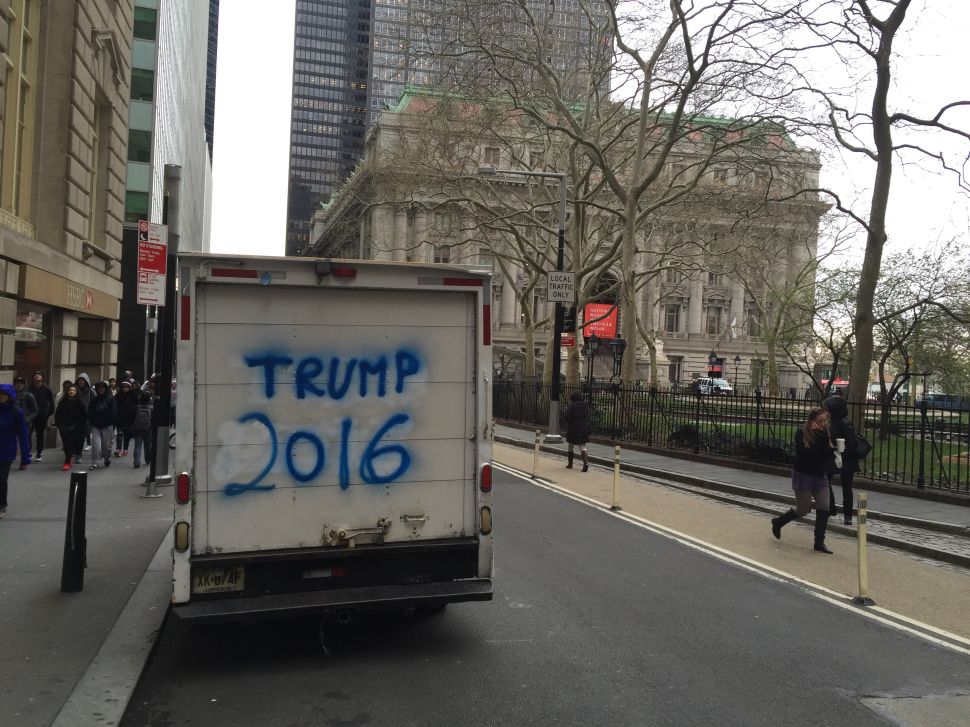