An eclectic crowd of TV executives, musicians, super-fans, and art aficionados gathered at the Angel Orensanz Center in preparation for the upcoming sixth season premiere of Game of Thrones. Any devoted Thrones follower could see where this was headed. Like any respectable Westerosi event the alcohol flowed, the food was rich, and each and every guest was promptly and thoroughly killed.

Killed metaphorically, that is, by the sheer presence of the five Game of Thrones-inspired art installations displayed throughout the space. This was Art the Throne, an immersive experience dedicated to “bringing The Seven Kingdoms to life through artistic interpretation.”

I arrived early to the Lower East Side location, before the crowd piled into the oldest synagogue in the city. The massive event space was mostly empty, save for two familiar faces. Actress Hannah Murray–Gilly, from Game of Thrones–eyed illustrator Marcos Chin’s animated interpretation of Brienne of Tarth projected onto the synagogue’s right wall.

Across the room, actor Jacob Anderson admired a series of portraits by muralist Tristan Eaton, each one a take on Daenerys Targaryen. That Grey Worm, devoted as always.

My eyes moved from the famous faces to a far more intimidating one; a snarling wolf carved onto glass, glowing an angry red at the rear of the room. Appropriately this, Pop Chart Lab’s illuminated manuscript, stood as the most intimidating piece of the night. The installation was inspired by season three’s infamously bloody Red Wedding, in which fan favorite RobbStark, along with his mother Catelyn and a whole host of innocent Tullys, were slaughtered at the order of Walder Frey.

Fittingly, the 12-foot-tall manuscript is as imposing as it is beautiful to look at, it’s effect ruined only slightly by the nugget of trivia offered up by the publicist beside me. “I think Sarah Jessica Parker got married here.” A far less murder-filled ceremony. We assume.

Lines started to  form at dual bars–one fire-themed, the other ice–serving Game of Thrones cocktails (the “Dragon’s Breath” was filled with jalapenos), and an assortment of Ommegang’s Thrones-themed beers. Recording artist Wyclef Jean mingled into the second-floor crowd. A DJ started to play mashups of Justin Timberlake and Michael Jackson, which is about as far from the “Rains of Castamere” as possible.

And, as it turned out, the Night’s King wanted no part of any of that. The leader of the fearsome White Walkers instead stood off in the corner, greeting attendees in his now-trademark “Come at me, Snow” pose from Season 5’s “Hardhome.” Squint and peer a little closer, perhaps like this, and you’ll notice this White Walker sculpture from Jeff Nishinaka is made entirely of paper.

Art duo CYCLE erected an “inverted golden crown” for the event, a massive structure of wood and glass that reflected the crowd around it. As the night kicked off you could see the hesitation of those surrounding CYRCLE’s creation. After all, nobody wants to be the FIRST person to step inside a piece of art. Hours later, though, and the people were practically pushing each other to get into the crown.

Which, if you think about it, is pretty much the central story of Game of Thrones.

Inside each section of the crown was emblazoned with a single word–terms like reign, and fall, or war. “I wonder if those are the most common words on the show,” I posit to the one other occupant next to me, early in the night.

“Maybe. But then you’d think it would include the word ‘fuck,'” she replied. “Or ‘cunt.'” Somehow, even surrounded by a literal crown, that was the most apt summation of Game of Thrones’ aesthetic I heard all night.

Art the Throne can be viewed online on Vibe, HBO’s website, and Game of Thrones’ Facebook page. 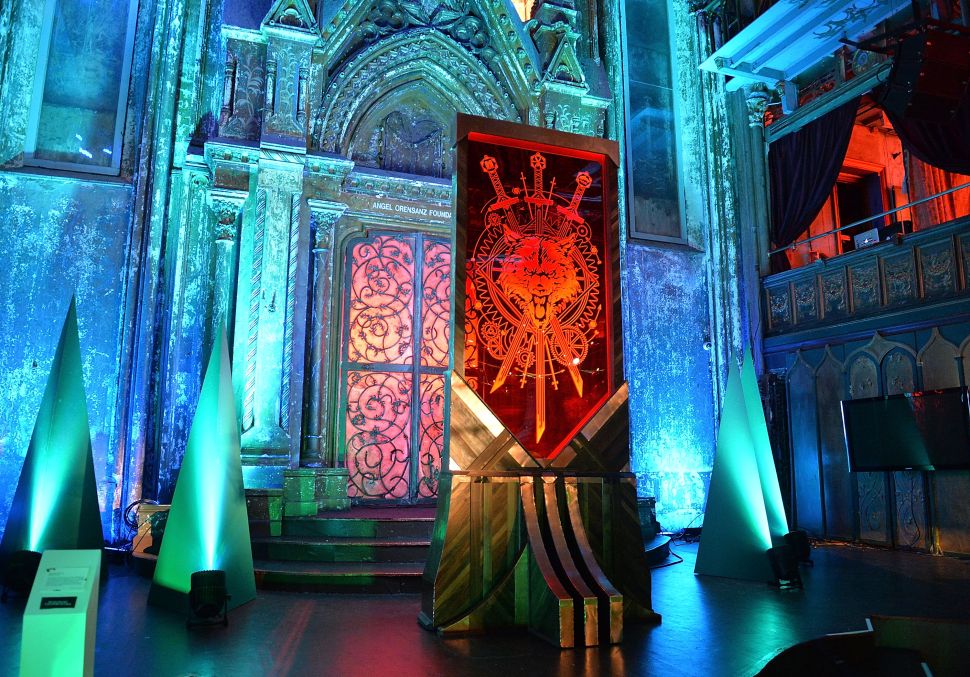