| Motion creates Emotion | I love being a female JOCK! Being able to express myself through movement is one of the greatest gifts I've received. Today, share your personal love of movement with your friends! Take someone to a new class or simply just get outside! Leave your comfort zone and simply set yourself free. 🙌🏻 #NUFit #JOCK #PONYTAILSFLYING #iwillwhatiwant #UA

There is no clear cut technique for how to get through a breakup, as every person is different and every relationship is different. For some, it takes a real mourning period involving sad movies, journaling and eating their body weight in ice cream. Or maybe that is just the breakup law according to movies. For others it’s just distracting themselves with new projects like becoming vegan or learning to knit.

Therapy is always a viable option, but that can be both expensive and time consuming. Which could be why intense, boutique fitness workouts are becoming popular, as they provide a therapy of sorts, while also burning calories. After all, exercise makes the brain release serotonin and endorphins naturally. Think about it: Sitting on a bike in a dark room with the music blasting and being told to fight is cathartic. You can cry and scream and no one will think twice about it. In fact, they might even think you’re super hard core.

Natalie Uhling, founder of Natalie Uhling Fitness, told the Observer, “I think movement is a way of expression…saying something without actually “saying it.” Sometimes when you are going through hard times you don’t want to talk about it, but you need to let it out and movement allows you to do that.”

But sometimes you also just really need to say a bunch of curse words which is why Canadian yogi Lindsay Istace started Rage Yoga in Dickens Pub in Calgary. She was going through a painful breakup and though she found the practice of yoga soothing during this time, it was lacking something. So she added beer, swearing encouragement and a soundtrack from the likes of Metallica. For her fellow heartbroken yoga enthusiasts, this was just the right medicine. After launching in January of this year, her classes have been in such high demand that Ms. Istace has launched a Kickstarter campaign to help launch a cross country tour. It’s only a matter of time before we have rage classes in New York.

There has been an uprising of workout classes and just basic workouts incorporating alcohol, and perhaps this is an extension of that. Cursing has been scientifically proven to help alleviate pain, according to a recent study. When we curse, our amygdalas, one of the most primitive parts of our brains, become highly active. We react differently to these words because we know they elicit strong responses from people, so our memories of them are stronger and more emotional. While the rest of our language is processed by the brain’s left hemisphere, curse words rely on our limbic system, which controls memory, emotion, and behavior, along with basal ganglia, which controls motor functions and impulse control. Swear words literally bring out primal urges in us. It’s why saying fudge just doesn’t cut it sometimes.

You could save yourself some money and just go into a dark, hot room and say a bunch of curse words if you’re feeling mad about a breakup, but if you can get a workout in too, why not? 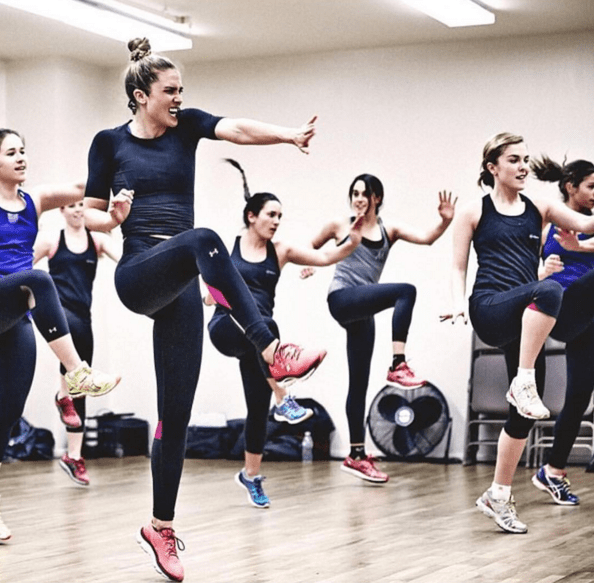