Ohio Gov. John Kasich stopped in ultra-Orthodox Borough Park, Brooklyn to tour a matzoh bakery and meet with students at a school for autistic children—and to expound on his personal religious reflections.

With New York primary set for April 19 and Passover on April 22, the third-place GOP presidential candidate decided to reach out to the religious Jewish community as part of his campaign in the Empire State. Washing his hands before going into the Shmurah Matzoh Bakery, the Roman Catholic-turned-Anglican midwesterner struggled to operate the paper towel dispenser and shared his thoughts on Old Testament figures.

“You know who I like? I like Joseph. And I like—you know who Joseph is?” he said, presumably referring to the Hebrew patriarch in the Book of Genesis and not the surrogate father of Jesus. “And I like Joshua. You like Joshua?”

“How about Elijah? You like him?” he continued, alluding to the prophet for whom religious Jews pour a cup of wine and leave their front doors open at the Passover seder. “He had a tough time there. He said ‘why am I having such a tough time,’ and you know what God told him? ‘There are a lot of people having tougher times than you.’ Why do I like Jacob? Well, because I think he was a pretty good guy. You don’t read about many of his flaws.”

Asked if he had visited a similar bakery in the past, he answered “probably.” After walking the floor of the facility and receiving a box of matzoh, Mr. Kasich explicated on the parallels between his Christianity and religious Judaism.

A D train running along the trestle overhead interrupted him several times.

The governor, who has not emphasized his faith much on the trail, told the Observer that he did not take all of scripture literally.

“We use a judgment when it comes to any part of the Bible,” he said, adding that he did believe the Book of Exodus, which Passover celebrates, was accurate.

After talking to the press, Mr. Kasich headed next door to the Shema Kolainu-Hear Our Voices school for autistic children.

Of New York’s 95 delegates, the system awards 81 by congressional district—three to each seat in the House of Representatives. A candidate must get 20 percent of the vote in the district to qualify for any delegates, and if they hit 50 percent, they get all three.

The 14 remaining delegates are awarded on an at-large basis: the candidate who wins the state gets three of them, and if they receive half the vote in the state or more, they carry off the other 11 as well. Borough Park belongs to the district of Congressman Jerrold Nadler, whose turf stretches over the West Side of Manhattan then cuts across town and fords the East River to capture a patch of Brooklyn.

The ultra-Orthodox community is socially conservative, but still overwhelmingly registered Democratic, meaning most will not be able to vote for Mr. Kasich or any GOP candidate in New York’s closed primary system. Borough Park does harbor some Republicans, though.

But nationally the Buckeye State pol has just 143 delegates to Mr. Cruz’s 545 and Mr. Trump’s 743. With only 854 delegates still up for grabs in the remaining states, it is impossible for Mr. Kasich to gain the 1,237 necessary to clinch the nomination before the July convention.

Instead, he has said his strategy is to win as many as possible with idea that neither of his rivals will clinch before the conclave either. At that point, he hopes to persuade delegates currently pledged to Mr. Cruz and Mr. Trump to instead back him after several rounds of voting.

When a little boy at the school asked Mr. Kasich how many votes he had so far, the candidate answered succinctly. 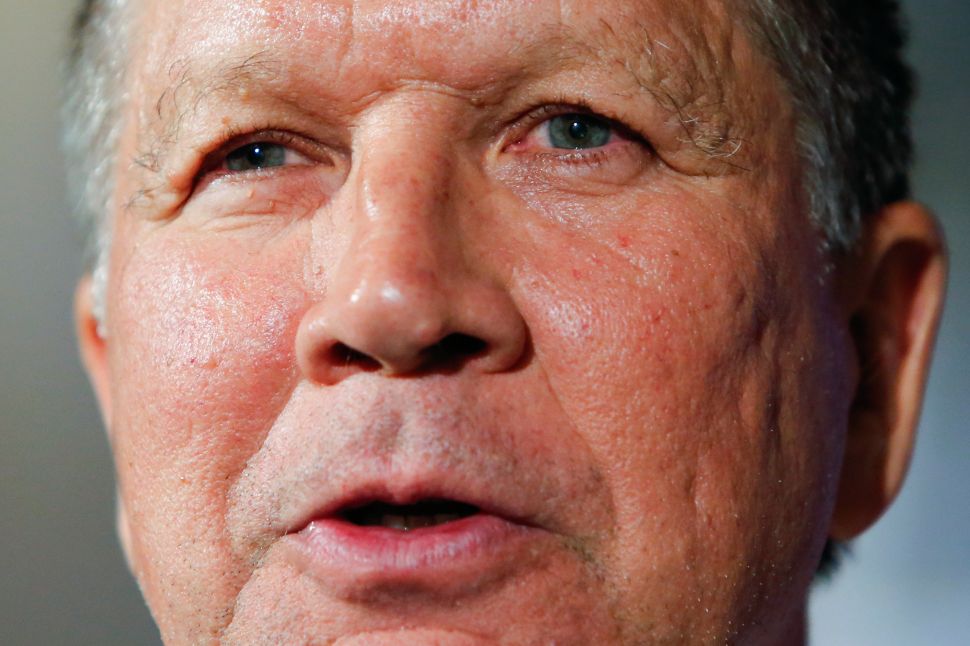