It was more of a lunch stop than a campaign stop, but who could blame him?

John Kasich, the Ohio governor and Republican presidential hopeful, hit the Bronx today—chowing down on Italian delicacies in a crammed market along famous Arthur Avenue, home to the borough’s own version of Little Italy.

“We love New York values, are you kidding?” Mr. Kasich said as he moved through a tight and crowded aisle in front of Mike’s Deli, beneath dried salami hanging from the ceiling. “It’s a great place. I love New York. It means innovation, neighborhoods, great foods, great people. It means everything.”

The Bronx, once known for blight and urban decay, is experiencing a bit of a star turn during New York’s first truly competitive primary in years. Democratic front-runner Hillary Rodham Clinton clumsily swiped her MetroCard for a subway ride near Yankee Stadium this morning. Her rival, Vermont Senator Bernie Sanders, drew thousands to a rally in the South Bronx last week. And one of Mr. Kasich’s rivals, Texas Senator Ted Cruz, yesterday visited the Bronx—despite previously unkind remarks about the borough and his much-maligned slight at “New York values.” That remark—and votes against funding for Hurricane Sandy relief and the Zadroga Act—have left plenty of New York Republicans cold to Mr. Cruz.

But then again, Mr. Cruz is not really the star of the New York Republican primary: that would be Donald Trump, the Queens native who held a packed rally on Long Island last night. Mr. Kasich trails both of them badly in terms of delegate count, but has remained in the race in hopes of finding an opening, perhaps at a brokered convention, as the establishment pushes back against Mr. Trump.

Today’s visit to the deli drew a decidedly smaller audience than Mr. Trump’s mega-rally, though the winding Bronx venue felt packed with media and students from nearby Fordham University, many of whom said they were actually registered to vote in New Jersey. Mr. Kasich spent more time eating than he did mingling, sitting at a small table adorned with spaghetti, sandwiches piled high with Italian meats and cheeses, and pasta e fagioli, a soup that deli owner David Grecco insists you pronounce correctly when ordering. This is not Mr. Kasich’s first visit to an Italian American neighborhood in the city that was focused on food: he also ate pizza—with a fork—in Howard Beach.

“We will not build a stronger country working from the top down—the strength of our country rests in our neighborhoods, just like right here,” Mr. Kasich said, hard to hear in the boisterous environment that featured a man occasionally playing the accordion. “That’s what this race is all about.”

While he was dining, Michael Rella, a butcher at Peter’s Meat Market—the next stall over—urged Mr. Kasich to perhaps try being a little tougher on the trail, if only get some of the attention his opponents get.

“He’s the only guy that really make sense. And he’s nice. You know, he talks like a professional—he talks like somebody who knows what he’s talking about. The other guys are just going back and forth, like baby talk,” Mr. Rella told the Observer before Mr. Kasich arrived, a sentiment he then echoed to the candidate. “I think the problem with him is he’s a little bit too nice. He comes across as nice, too nice of a person. Maybe he should wallow, like he says, in the mud to get some media attention. Just a little, know what I mean? Just to show he’s got a little oomph. He’s got guts.”

But Mr. Kasich’s moderation is what made him appealing to some of the students on hand to support him.

“I do think he’s the only candidate who has made sense so far,” said Maria Troia, a Fordham freshman who is registered as a Republican in New York. “And I do also intend to vote for him.”

Joseph Riccobone, 20, a sophomore, said he came out because he’s never seen a presidential candidate before.

“I also like Kasich. I think he’s moderate, he can unite the parties,” Mr. Riccobone, who is registered as a Republican back home in Franklin Lakes, N.J., said. “So I think he’s a good balance between maybe like a radical Bernie or a radical Trump, and I wanted to come out and support him.”

But the lure of Mr. Trump remains strong in his home town. Francesco Castiglione, who played Italian classics on an accordion while the crowd awaited Mr. Kasich, said he wasn’t exactly sure who he would vote for yet, but used a phrase that seemed to tip his hand.

“Whoever can make America great again,” Mr. Castiglione said, “My vote goes there.” 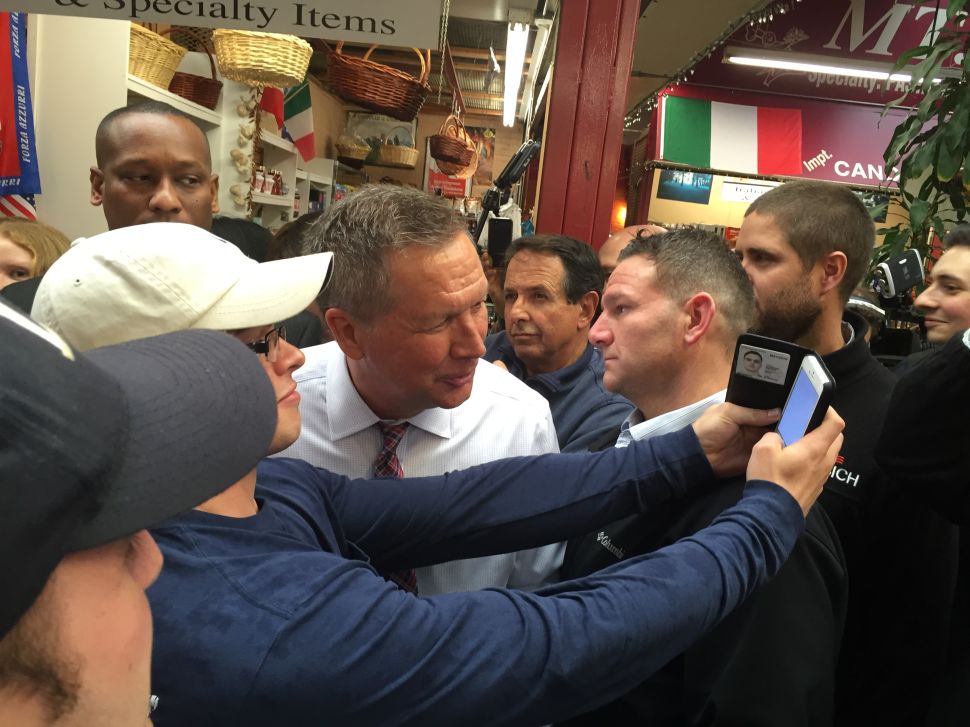