Day one of the royal couple’s India visit is complete, and it was as elegant as the public anticipated, with a mix of fresh looks by Indian designers and a few of the Duchess’ favorite labels. Kensington Palace has been documenting their travels, including wearing flower garlands and playing cricket in wedges.

The Duchess of Cambridge kicked off the announcement of the couple’s trip in a blue, sheer dress by Indian-born, London-based womenswear designer Saloni, who founded her contemporary brand in 2011. The frock was donned for a reception at Kensington Palace to meet young people from India and Bhutan, the two countries they planned on visiting. While they chatted with the young women present, there was no sighting of the pair’s own young children, unfortunately.

After arriving in Mumbai, The Duke and Duchess laid a wreath at the Taj Palace New Delhi Hotel Memorial in honor of the victims of the 2008 terror attacks. The couple also plans on visiting children in India’s slums during their visit. The Duchess of Cambridge has been outspoken about her support for children, especially through her work with YoungMindsMatter.

The couple then were presented with flower garlands and tilak (a colorful, ornamental paste which is applied to the forehead) while they scattered flower petals into the , in an Instagram-worthy moment many would be jealous of.

The princess wore espadrilles and a printed tunic by Anita Dongre, another Indian brand. Somehow, the Duchess made the printed maxi dress and the garland work. Even more inexplicably, the tunic isn’t sold out yet. She later played cricket in the same ensemble, including the wedges, proving her royal pedigree. After all, it takes numerous princess lessons to obtain the ability to run in the grass in heels.

On day two, the Duchess wore a white dress (which is already sold out) to meet young entrepreneurs in Mumbai and on her visit to India Gate, the national war memorial. The preppy wool-crepe ivory dress by Emilia Wickstead was previously 60 percent off on The Outnet but is now unavailable. There are still similar styles from the designer available, but none have been worn by an actual princess. 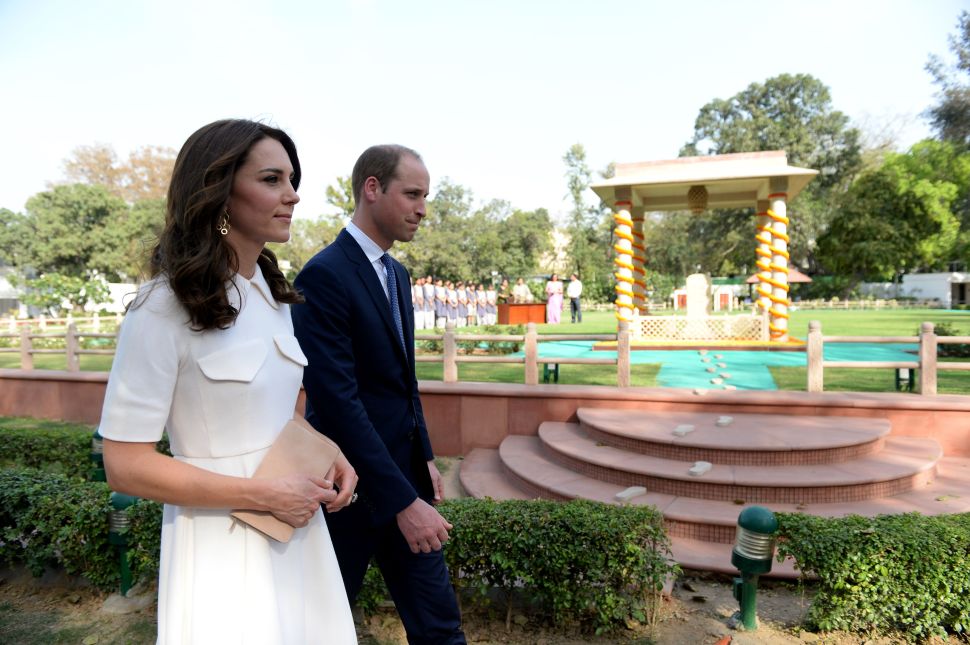