“What do you do?” The question is a staple of parties and chance encounters, but a job title or a brief explanation that is given as a response give little insight into what people actually do every day at work. Welcome to our new regular column where we will ask remarkable executives and entrepreneurs to detail their day.

Maris Kreizman is a familiar figure in the literary world. She is the author of Slaughterhouse 90210, a book which melds pop culture and literature that grew out of her popular Tumblr of the same name. She is a Publishing and Journalism Outreach Lead at Kickstarter, the crowdfunding platform which launched in 2009 and has become a popular way of raising money for artistic projects.

Ms. Kreizman lives in Williamsburg, Brooklyn with her fiancé, the comedian, author and Last Week Tonight writer Josh Gondelman, and their dog, Bizzy. Before our scheduled phone interview on Monday evening, Ms. Kreizman had warned over email that since she had just gotten engaged on Saturday (Mazel Tov, Josh and Maris!) it had been an unusual Monday, filled with life event-related excitement and congratulatory messages. But despite that, it was a fairly standard day at Kickstarter’s headquarters in Greenpoint, Brooklyn.

But what does that mean? What does a Kickstarter publishing project specialist do? Ms. Kreizman broke down her day for us. The interview has been edited and condensed for clarity:

I leave for work around 8:30. I usually stop at a coffeeshop and read before I get into work. That’s my important me time. Since I walk to work, I still end up being one of the early ones to arrive at Kickstarter. I get in around 9:30, and a lot of people start at 10. I could exercise or I could read. I choose reading. I’m reading Ways to Disappear by Idra Novey. I just started, but so far it’s great. And I just finished the Dana Spiotta [Innocents and Others], which is incredible. I loved it.

When I first get to work, I just look at the site. There are usually a bunch of projects that I’ve worked on that are live, so I check on their progress to see what’s going on and where the traffic is coming from. Right now, The Vancouver Observer is doing a project to start a series against climate change, so that’s a big one I’m working on now. I also do outreach. Our publishing team is just two people, so we obviously can’t get to all of the projects in advance.  Often I’m checking the site in the publishing and journalism categories for cool new things that have popped up while I wasn’t looking. Today, I found this fucking amazing magazine called Kazoo. It’s like Rookie but for younger readers. It’s for ages five to 10. It’s a really great group of people. So I saw that project this morning and reached out to the creator—that’s what we call them. I sent a note that was just like, ‘hey, I saw your project and it looks amazing and let me know if you have any questions and I’ll pitch it to our social media team.’ Just acclimating to what’s been happening to the site takes a while. I’ll also check what’s trending and what the best projects of the day are.

‘A lot of what I’ve been doing recently is just talking to major publishers and thinking about how we can work together to support authors.’

At 11:45, I spoke to a potential creator for 15 minutes who’s launching a travel magazine that sounds amazing. I just gave her some advice on best practices,  talked about some ideas and sent her a suggested timeline for launching a Kickstarter project. People who back Kickstarters love the story, they love feeling like they are in the ground floor of the process. I also think that being able to indicate that you have a sense of how to do it is very important. You can have a great idea for a book, but if you don’t mention how you are planning on getting it published or what you are going to do, that’s a warning sign.

At noon, I went into a meeting for Looker training. Looker is a tool for getting statistics for projects on the site. I won’t know if I know how to use it until I actually get in there and start trying it. We used to have someone that I would ask for this information, and then at some point Kickstarter was like, you should just be able to look at this and figure it out yourself.

After that, I answered some emails. A project that is going to launch very soon sent me a draft, so I looked it over and gave notes and shared it with our social and curatorial team. I set up a lunch date with a literary agent who has a couple of YA clients and wants to talk about ways they can use Kickstarter.

There’s a 1:00 meeting every Monday with the social media and curatorial team. We talk about projects we are working with or discovered, and also things that are in the pipeline. We did that today, and I pitched Kazoo magazine and I also talked about a project that’s live that I worked on called The American Bystander, which contains writing from all sorts of amazing humorists.

Then I ordered lunch, a sad desk salad. Greenpoint is a wonderful, lovely place to work. But I actually miss the midtown deli. Just having that variety of options there ready to go, fresh ingredients. During lunch I was looking at Publisher’s Lunch and Lithub, keeping up on the industry, but not work, really.

I’ve gotten really bad at coming into the city. I’m one of those assholes who works in Brooklyn and come into midtown at 5 sometimes for a reading or something and have a heart attack. Ninety percent of it is excellent. The lunch choices, eh, not so great. But so many good coffee shops. And so many good snacks at Kickstarter.

I’m preparing for this insane business trip. I’ve never been away for this long for work. I’m leaving Wednesday and staying in LA until next Monday. So 11 days. I’m going to AWP and then the Los Angeles Times Festival of Books is the week after, so instead of going there and coming home and then flying back to LA, I’m just staying. I’m sad to be away from the dog and the Josh. But my life is such that business and pleasure mix very well. The people I made plans to see I will have fun with, but we will also probably talk about business a little bit.

A lot of what I’ve been doing recently is just talking to major publishers and thinking about how we can work together to support authors. It might not be that a big publisher will ever run its own project, but maybe one of their authors will and they will help them in some way. My big case study in terms of great success on a larger scale is McSweeney’s. They launched this huge campaign last year to fund all of their publishing arms, from their books to The Believer to their poetry line and their website. Going after smaller presses is still something I want to do very much. And then there have been a wave of traditionally published authors who maybe want to go on tour or do extra research or do something for which they don’t have quite enough money. So it’s a matter of doing a Kickstarter and finding the funds to do what they want to do, hopefully pre-ordering the book or offering the book as a reward so it’s a different platform from which to sell books.

One of my new initiatives is approaching Indie magazines about doing Kickstarters. Because there is a very clear cut reason to do a Kickstarter if you are a magazine. You can offer the magazine as a reward, you can offer subscriptions as a reward. We’ve had a lot of success with a lot of different kinds of magazines—from literary magazines straight on to a magazine about video games and art and culture called Kill Screen.

I go to a lot of reading after work.  I’m one of the people who leaves the earliest from work because like, Housing Works events start at 7 and getting from Greenpoint to the City takes time.

We have a dog walker who comes, but sometimes I do try to go home before. I live right at the L, so a lot of times I’m going right by my place anyway.

I’m home now, by the way. I left work early today because tonight I’m going to a Ted Talk at 6:45. It’s an evening devoted to Fleetwood Mac’s album Rumors. Everybody has a song that they are going to talk about and do a Powerpoint presentation on and I’m doing the song “I don’t want to know.”

I’m usually in the office three or four days a week. There might be a day I’m working from home and there might be a day that I’m taking meetings in Manhattan all day. A cool thing about doing publishing outreach at Kickstarter is that publishing is in New York City, for the most part. There’s plenty to keep me busy just doing that. 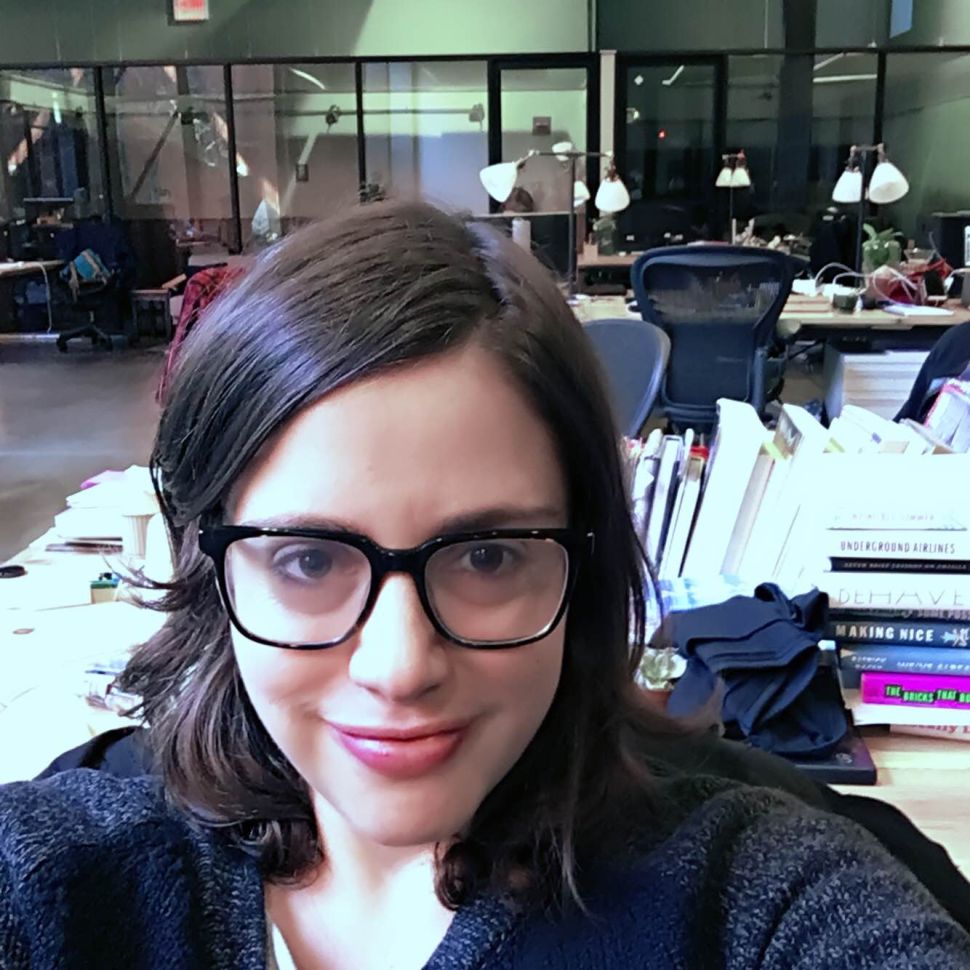