So, Hive is kind of a dick. Shocker, right?

Malick, too, is an even bigger dick than we’d initially realized. Hell, even Lincoln’s secret dick-history is revealed. It’s a regular old dickpalooza this week.

“Paradise Lost” utilizes a flashback sequence to great effect, unveiling the history of Gideon Malick, shortly after his father’s death. His origin story as the scum of the earth, if you will. The year is 1970.

Like Gideon, the elder Malick was a devoted Hydra member, one of the subset that subscribed to the Maveth creature worship. Papa Malick led the charge in sending men through the portal, a ceremony in which the sacrificed member is the one who picks the unlucky white stone. Gideon and his brother Nathaniel are tasked with continuing this tradition. But first, they’re forced to meet with an imprisoned Daniel Whitehall, who wasn’t a big fan of their pops. Daniel (in his cringe-worthy, weak German accent) spills the beans about their father. He insinuates that Papa Malick avoided being the portal victim with the help of a particular book—Paradise Lost (hence the episode title).

Young Gideon is uninterested and brushes Whitehall off, but Nate is more discerning and sure enough, when he pops in to take a look at the book, there’s a duplicate white rock with a tell-tale notch in it hidden there. That notch allowed Papa Malick to cheat the system and feel out which was the unlucky stone whenever he reached a hand into the bag during the many portal ceremonies. The Malick brothers are dismayed to learn that their father sucked, but mutually decide to be better than him. I’m sure you can see where this is going—especially since we’ve seen neither hide nor hair of Nathaniel in the present.

Still in 1970, the Malick boys agree to toss the notched cheat stone into the river the morning of the next portal ceremony. Except Gideon doesn’t do it—he proves himself to be his father’s son after all. He secretly smuggles in the notched white stone, and when it comes down to Gideon and his brother, it’s bye-bye, Nathaniel. He allows good ol’ Nate to pick the loser’s stone and be sent through the portal to Maveth.

In the present, at Chez Malick, Hive has invited himself over. Quite rude, but considering the guy’s been alone on an alien planet for thousands of years, it’s logical that he wouldn’t have basic etiquette down just yet.

Stephanie, Gideon’s recently-introduced daughter, is bashful at the sight of him. When Malick arrives home, literally the very first thing she does is gush to Malick about how cute Hive is. Girl, what? I mean, yes, Ward is a handsome fella (especially in his not-a-corpse incarnation), but she is fully aware that she’s talking about a thousands-of-years old part-alien. So… keep it in your pants, Stephanie. Malick is appropriately low-key horrified at Stephanie’s remark, given that he’s seen this dude turn humans into red sludgy skeletons.

Hive announces that he’s invited over Hydra’s inner circle, with the intention of revealing his true self to everyone. Cue the deeply nefarious stare-down between Hive and Malick as Stephanie naively blinks up at Hive with doe eyes.

Sure enough, Malick’s unseen vision of the future at the end of “Spacetime” featured his own death. He nervously describes it to Stephanie, trying to convince her that his death will be at Hive’s hand. Stephanie is having none of it. I’m not sure if she’s that dumb or just, like, super thirsty. She’s positive that Hive would not possibly turn on Malick—it’s illogical, you see, because Gideon is the whole reason Hive is back, and he’s been a devoted follower. And a half-alien monster exiled to a strange, lonesome planet for millennia is nothing if not reasonable.

She finally concedes that, as her father suggests, Hive might potentially off him as a show of power. She tells her father to buck up and assert himself. Basically, she wants Malick to remind Hive of his long-term usefulness. (Side note: her “buck up” is essentially a callback to what Gideon told Stephanie after her mother died. So we know this is a very well adjusted family.)

Malick does as Stephanie suggests, reiterating pretty blatantly that it was he, Malick, who found Hive and brought him back to earth. Hive blows right past that, instead remarking on what a good little follower Stephanie is. Gideon tries to gauge whether Hive still has access to the memories of his prior hosts. Hive doesn’t let much on, and that night, he reveals his true face to the inner circle, including the Malicks. Apparently, it’s so horrifying that we don’t get to see it head-on. We just get a tentacle-y side view.

Later that night, Hive brings Stephanie to Malick’s office and reveals Gideon’s cowardice and his betrayal of Nate. This whole scene is fantastic, intercut with the flashback reveal of the moment that Nate was chosen as the portal traveler. Hive doesn’t just tap into Nate’s memories—in that moment, he is Nate. He refers to Gideon as his brother and makes references to “their” father, and it’s appropriately disorienting to a startled Malick. His mistake has come back to haunt him, his betrayed brother wearing the flesh of Grant Ward. It’s a phenomenal performance by both Brett Dalton and Powers Boothe, and an incredibly creepy moment.

Stephanie turns out to be just as cold as her father. At the news that her father was a coward, unwilling to make the ultimate sacrifice (namely, his life) for Hive, she weeps in shame and gives Hive the go-ahead to kill her dad. She’s less concerned that her father essentially insured his own brother’s death and more concerned that Gideon wasn’t willing to be sacrificed to a mystery monster on the other side of a portal.

The writers do a great job of making it appear that Hive may actually kill Malick and continue on with Stephanie at his side. She’s loyal, she thinks he’s cute, Hive thinks she’s swell, and she’s very willing to sacrifice her father to Hive. Hive plants a smooch on a clearly reciprocating Stephanie—which I think we can all agree is incredibly weird, given that he’s spent the entire scene prior to the kiss basically being her dead uncle. It’s very incestuous and strange. Stephanie is an odd duck.

Or, sorry, was an odd duck. Because a kiss isn’t just a kiss—it’s Hive sucking the life out of Stephanie. Malick makes a strangled “Oh no!” sound, but essentially does nothing to stop Hive. In the closing coda scene, the creature assures Malick that he’s got nothing else to fear—the forced sacrifice of Stephanie is proof enough that Gideon’s willing to sacrifice for Hive. Now, they’re a united team, together to the end, says Hive with a menacing hand clapped on Gideon’s shoulder—whether Malick likes it or not.

Meanwhile, over with Team S.H.I.E.L.D., the group splits up to tackle the Hive problem. Coulson calls a meeting and explains to the group that, immediately following the Transia takeover, Hydra moved into a subsidiary called GT Agrochemical and began removing truckloads of equipment from the facility. They need to figure out what Hive has taken exactly.

Lincoln and Daisy depart for South Dakota to track down an old frenemy of Lincoln’s named James—one of Jiaying’s bitter wannabe-Inhuman rejects who wasn’t gifted with powers, from the Afterlife days. James stole artifacts from Jiaying before being banished, and apparently has information about Hive.

Mack, May, and Coulson break into GT Agrochemical and discover the remnants of the experimentation left behind, in the form of cheap-looking paper bugs that we are ostensibly meant to believe were once real bugs. The team is accosted by Giyera, who they then lock in a completely empty room with May, forcing him to use hand-to-hand combat instead of his powers. It’s a great, very athletic fight scene. We’ve been way overdue for a good old-fashioned May-destroys-someone sequence, so this is golden. She takes him down in the culmination of a serious knock-down brawl, and they take him back to the jet, locking him in a containment module.

Jemma theorizes that, based on the cheap-looking paper bugs the team has returned with, GT Agrochemical was performing experiments to genetically engineer plants and animals to be resistant to invasive species. She guesses that Hive either wants the resulting research to use it for his own purposes, or to destroy it, if it’s uncovered a potential threat to him. It’s clearly the latter, because they’ve also deduced that Hive himself is some kind of an invasive species, made up on tiny flesh-devouring (and reanimating) organisms.

In South Dakota, Daisy and Lincoln approach James, a crotchety and kooky Australian who lives in the middle of nowhere and surrounded himself with landmines to keep away unwelcome guests. Apparently, he’s lived off the grid for years, fearful of Jiaying sending someone to finish him off. Daisy takes out all the landmines with a pretty cool one-tremor-to-the-ground move. In exchange for a terrigen crystal in order to transform and gain powers, James trades them a Kree thingamajig and all the information he has—namely, that the Maveth creature was an original-recipe Inhuman, one of the first, designed by the Kree to command the Inhuman army. Unfortunately, he was too powerful and the Inhumans banded together with the humans to banish him.

Boring Lincoln then does something fairly interesting—he reveals that he’s tricked James and has no intention of giving James the terrigen crystal for access to powers, because James doesn’t deserve powers. On the way out, a peeved James remarks to Daisy about Lincoln’s dark past, when he almost killed a past girlfriend.

Lincoln explains, en route back to the rest of the team: he was an alcoholic, lost and empty pre-terrigenesis, and almost killed himself and his girlfriend when he wrapped the car he was driving around a pole. Immediately after, he was brought to Afterlife, saved by Jiaying and her henchman Gordon, and given his powers.

Hence, Lincoln was once a dick. Which, if we’re being honest here, is something of a personality upgrade from “Lincoln is a blonde mop-human with eyebrows.”

Lincoln is apologetic for having kept the truth from Daisy, and in exchange, Daisy confesses her own held-back secret: the content of her second vision from Charles, in which a team member died.

On the jet, Giyera escapes lockup and hijacks the S.H.I.E.L.D. plane, en route to the abandoned oil field on the Dutch-German border, where Fitz has tracked Hydra. Giyera takes everyone onboard hostage. May manages to make a distress call to Daisy, alerting her that the plane’s been commandeered. Daisy panics, remembering her death vision, but Lincoln calms her down and convinces her to call in the Secret Warriors for backup on their rescue mission.

Looks like they’re getting the old gang back together. And by “the old gang,” I mean those two recurring characters with limited appearances from earlier this season whose names I can’t quite remember. Huzzah? 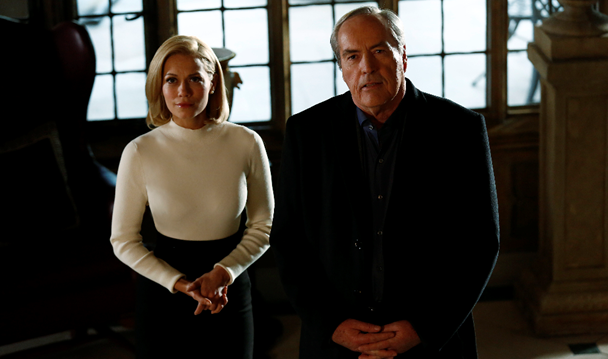