Well, that was… a lot. Daisy’s reserve team dove out of a plane within the first three minutes of the episode, so it quickly became clear that this would be an action-packed, heavy episode. Luckily, that momentum wasn’t wasted on a lame episode—Agents of S.H.I.E.L.D. completely delivered with “The Team,” on every level. It’s the best we’ve had post-hiatus (so far), by a landslide.

“The Team” picks up right where we last left off—Daisy and Lincoln rush to pick up Joey in Miami (where he’s mid-date with a cute guy) and Yoyo in Bogotà (where she’s waiting for a bus while practicing her English). To their credit, each of them snaps into action and drops everything when their nifty little S.H.I.E.L.D. watches light up. They only show the barest moment of hesitation when Daisy leads them to jump out of the jet on a mission filled with “I don’t know”s.

Giyera, cowardly but smart, realizes he’s outmanned after hijacking the S.H.I.E.L.D. Zephyr and hightails it, sending a team of Hydra soldiers led by Lucio (a.k.a. Medusa Eyes, Colombian-style) back in his stead. He reports back to Hive (who’s still wearing that damn trench coat), while the agents barricade themselves in a room aboard the plane. Simmons tends to May, who’s in bad shape, while Fitz rigs up a way to feed chlorine gas out of the room in order to disable their attackers, proving (once again) that FitzSimmons are low-key the most important part of the team. Take that, Inhumans!

Except, just kidding, the Inhumans are actually really quite useful on this mission (at first, anyway). In a great, surprisingly quick little sequence, Team #SecretWarriors (this name was created to be a Twitter hashtag, obvs) takes out the Hydra soldiers from all angles. Yoyo is super cool and adorable—so, naturally, the two best parts of this rescue sequence are Yoyo and Joey chatting about Joey’s date in the elevator right before taking the Hydra soldiers out in short order by working together, and Yoyo softly knocking at the door where the team is holed up and saying “Hello?”. Oh and, of course, those big grins she and Mack exchange when they see one another again before Yoyo forces herself back into business-as-usual face. YoyoMack? Mackelena? I SHIP IT.

Lincoln busts out some moves of his own, taking out a Hydra lackey and finding Malick. This is where the logic gives me pause, in that Lincoln exhibits exactly none. Malick is literally just standing around in that room, by himself, unguarded, waiting to be taken. And not for a second did Lincoln think, “Hmm, this seems suspiciously easy”? Oh, Lincoln, my sweet summer child.

Anyway, he takes Malick after smirking smugly about his big catch, and the team heads out. En route into the Zephyr, while Yoyo is taking care of rescuing the trapped agents singlehandedly like the BAMF that she is, Lucio reappears. He puts the whammy on Lincoln, dropping Sparky like a rock. In a rather extreme knee-jerk reaction, Joey straight-up stabs Lucio in the chest with a piece of pipe. Damn, Joey.

May, also a BAMF as per usual, pushes through her multiple injuries to fly the team out of there, dead Lucio and captured Malick in tow.  That’s right, y’all—not even massive internal bleeding can keep a good May down.

Back at Hydra headquarters Giyera, knocked on his ass by a DaisyQuake, is annoyed that kidnapping the hostages ended up being for nothing. Hive, meanwhile, isn’t too concerned—he points out that they’ve got someone on the Zephyr, now. The obvious candidate, at this juncture, is Malick, and that’s clearly who we’re meant to believe is their inside man. (Spoiler: That’s not who Hive means.)

Back at S.H.I.E.L.D. HQ, the #SecretWarriors debrief, patting themselves on the back and gloating about the mission’s success like a bunch of overzealous high school football players—yet another sign that the mission did not at all go as well as they’d hoped.

Coulson questions Malick, who sings like a bird, waxing philosophic about his daughter’s childhood, her death, and Hive’s duplicitous nature, divulging much of what he knows about Hive. Unsurprising, given that Hive unceremoniously murdered his daughter right before his eyes like maybe a day (at most) before that. Malick believes that Hive is a god, but an all-powerful, unsympathetic, dickish god, a la Zeus in one of his more swan-rapey moments. He’s also certain that Coulson’s faith in his team is doomed, explaining that Hive has the power to infect Inhumans and control their minds. Ruh roh.

Fun fact addendum: Hive was once known as Alveus (meaning “Hive” in Latin) and was the basis of common satanic myths! There’s an interesting god-devil dichotomy going on here, with Hive, in a strong scene between Malick and Coulson. But all I can focus on is that Malick and all the rest of the Hive-worshiping Hydra crazies were a bunch of morons for thinking this creature whom they knew was the basis of satanic myths would bring them glory or whatever. Buncha silly old dudes (+ Stephanie).

Mack walks Yoyo around S.H.I.E.L.D., flirting, showing off his brand-new Spanish language skills, and explaining which are the deadly and non-deadly weapons in the S.H.I.E.L.D. arsenal. How romantic! FitzSimmons, meanwhile, examine sorta-dead Lucio and find that he’s not 100% dead, so they quarantine him for further testing. Autopsies—also romantic!

Coulson’s conversation with Malick turns the Coulson paranoia knob up to 11, so he has Mack discreetly lock down the base. He meets with Mack and FitzSimmons, explaining what’s going on and instructing them that they’ll need to lock up the Inhumans until they can figure out both a test to see whether their teammates are infected and a cure.

Coulson returns to Malick and sells him on the idea of revenge, convincing him to give up all the intel he has on Hive, while FitzSimmons flirt over the corpse of Lucio and discover the Hive parasite lodged in his brain. They alert the rest of the team, who go fully into paranoia panic mode, which is only heightened when a sudden surge cuts off all the power. Grabbing a weapon, Mack notices one of the deadly weapons he pointed out to Yoyo earlier is missing. FitzSimmons, rushing to join the others, pass Malick’s interrogation room and find him dead, the S.H.I.E.L.D. lethal weapon next to his body. It detonates, destroying the room and Malick’s body and knocking back FitzSimmons.

The Inhumans have enough of the secrecy and Coulson finally explains the Hive mind control situation. Joey and Yoyo are immediately turned off, taking huge offense that S.H.I.E.L.D. is taking Malick’s word and turning against them. Lincoln similarly reverts to default pissy mode. The #SecretWarriors barricade themselves in a room and quickly turn on one another. Daisy calls Lincoln “Sparky” when she’s angry at him, which is a pretty wonderful detail. A fittingly puppyish name for puppyish Lincoln.

Yoyo and Joey want to leave the base and figure out the mind control situation on their own terms (which is… ridiculous, honestly), and Daisy agrees, except—surprise!—it’s a trap. She leads them straight to the containment room, where Coulson is waiting and accuses Lincoln of being the infected Inhuman. He produces the Alveus knickknack that Lincoln and Daisy retrieved from crabbypants Aussie James last week, which was apparently found in Lincoln’s backpack. Lincoln gets angry as Daisy begins to understand that Lincoln could have been infected far longer than they realized—when he saw Hive face-to-face at Transia. He moves to escape, and Daisy knocks him out with her powers.

Daisy is all sadpanda about her team’s first big mission being an epic failure; Coulson disbands the #SecretWarriors as a result, since they can no longer encounter Hive and need to remain in quarantine. Yoyo and Joey are totally over S.H.I.E.L.D. in record time, each wanting to get out ASAP after being tested and cleared of Hive’s control.

FitzSimmons brainstorm about Hive’s parasitic control (in summary: they have no idea about any of it). This devolves into cuddling and then kissing and then hand-flailing (sorry, that last part was just me, I guess). But on a plot-level (not a fangirl-level), this scene is immensely satisfying. Fitz’s love for Simmons has long been well established, and Simmons’ reciprocation is established definitively now, too. At this point, keeping them apart because ANGST and GUILT and REGRET is simply not working anymore—it feels thinly plotted and illogical. That Jemma is the one to take the initiative and insist that they’ve waited long enough (10 years!) is great, completely in character, and just a lovely moment (as is Fitz’s joke about the space painting). Iain de Caestecker and Elizabeth Henstridge have marvelous, easy chemistry—hopefully the writers finally allow this romance to flourish instead of consistently throwing ever-more-contrived roadblocks in their way.

Meanwhile, Daisy breaks out of quarantine and visits Lincoln. He insists that he’s not infected and she believes him immediately, offering to break him out and noting that S.H.I.E.L.D. can’t hold them. Lincoln realizes that something is off. Cue Daisy crazy eyes. Seriously, Chloe Bennet rocks the crazy eyes during this ending sequence, looking more and more unhinged as the scene progresses. It’s pretty fantastic.

Alas, Lincoln doesn’t handle dealing with a mind-controlled girlfriend very well. He yells at her about people dying, and Daisy brushes off Malick’s death because, yep, it wasn’t a red herring after all. Malick is actually dead, and Daisy actually killed him. She’s completely terrifying in that quick flashback, empty-eyed, crushing his body using her quake-powers.

Daisy really gives it a go, trying to convince Lincoln to come away with her and join Hive, but he’s not having it. I always assumed that there would be some kind of panic button in those containment modules, but I guess not—Lincoln just sits there, looking forlorn and kicked-puppy-like, not trying to stop his girlfriend as she breaks out, stealing the Alveus thingamabob and an assortment of terrigen crystals to take with her. For good measure, she brings the house down on her way out. It’s unclear whether she’s trying to trap the agents or flat-out kill them. I assume the former, given how earnestly she tried to convince Lincoln to join her. The slow-mo shot of Daisy walking out of the base, hair blowing (the opposite of her usual hero-hair shots), wreckage tumbling down behind her, is a thing of beauty. Incredibly cinematic and an all-around great performance by Chloe Bennet.

In the closing coda, Hive, creepily palming that white stone that Malick used to sentence his brother to Maveth-death, reports to Giyera that Malick is dead and that the next step is to locate Skye. It seems significant that he calls her Skye, and not Daisy—a hint, perhaps, that he’ll be tapping into his Ward-persona (as he tapped into his Nathaniel-person last week) when he and Daisy come face to face. After all, Ward only knew Daisy as Skye; Hive would be in the same boat.

Giyera also informs Hive that Malick left behind a substantial estate—$960 million—which seems to inexplicably perk Hive’s ears up. Inexplicable in the sense that I can’t fathom what a millennia-old half-alien monster would need funding for. I mean, he’s not a tech start-up, for god’s sake. 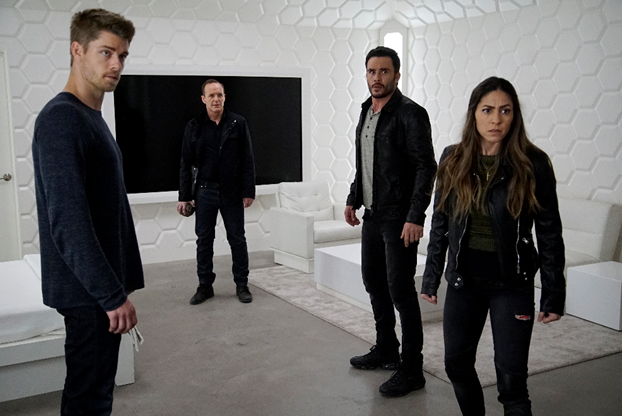