Last week’s resignation of Ukrainian Prime Minister Arseny Yatsenyuk and seemingly unexpected promotion of the Speaker of the Parliament Volodymir Groysman to lead the Cabinet puzzled only those who do not closely follow Ukrainian politics.

Right after his candidacy was announced, the persona of Mr. Groysman—who is virtually unknown outside of Ukraine—got under the magnifying glass the country’s friends and foes. And the more observers dug into his past, the less hopeful they were about “the path of change” that the Maidan revolution had tried to put the country on.

In May of 2014, right before the first post-Maidan presidential elections in Ukraine, Germany’s Der Spiegel magazine wrote that those wanting to understand Petro Poroshenko should visit Vinnitsa, a provincial capital of 370,000 inhabitants, 124 miles from Kiev.

Mr. Groysman, 38, was born and raised in Vinnitsa. Fifteen years ago, he was taken under Mr. Poroshenko’s protective wing, and on multiple occasions proved himself the loyal vicegerent of the powerful oligarch. They’ve had a long history together—and shared political and economic interests in their shared hometown of Vinnitsa.

In 1994, after finishing the Vinnitsa high school at the tender age of 16, young Volodymir Groysman put aside dreams of continuing his education, concentrating on making money instead.

The teen’s first position was to become the Commercial Director for his father’s company in Vinnitsa, Yunost (or “Youth” in Russian). The company had a lease on a half a hectare of municipal land and was building an emporium on it. In the 1990s, it was not possible to control the Vinnitsa market place (or any market place on the post-Soviet territory) without having strong and friendly ties with organized crime. Coincidentally, this period of Volodymir Groysman’s life is shrouded in secrecy.

‘When Volodymir Groysman will start stealing, he will steal off the profit. Yatsenyuk was doing it off the loss.’

The shopping mall built later on the municipal land is not the only jewel the Groysmans have in their possession in Vinnitsa, the journalists believe. They say that the chain of “Grand” stores, some of the newspaper, asphalt and concrete production plants are in the clenched fist of Volodymir Groysman.

No big money in Ukraine has ever been made without strong connections to political clans. By 2002, Volodymir Groysman outgrew his shopping mall’s potential and decided to go into politics. Once again, it was Petro Poroshenko who discovered and blessed the political potential of the young Vinnitsa market place king.

In 2002, two Groysmans—father and son—were simultaneously elected into the Vinnitsa town council. Volodymir was only 24 at the time and, visibly, there was something missing in the resume of the perspective young fighter for a better Vinnitsa: An undergraduate diploma.

By this time, in post-Soviet Ukraine, the solution to the problem of the lack of formal education was being addressed by a number of unscrupulous institutions.

In 2003, a coveted diploma of a lawyer from the so-called Inter-Regional Academy of Personnel Management (MAUP) appeared in the portfolio of the ambitious Vinnitsa politician.  After Mr. Groysman’s recent appointment to the position of the Prime Minister, Vitaly Kupriy, the Ukrainian Parliament deputy, accused him of buying his lawyer’s diploma for “lard.” (The expression comes from a Ukrainian village folk character coming to Kiev with his backpack full of home-salted lard hoping with this simple-minded bribe to get accepted into the university.)

“Judging by the documents, Groysman studied at the Academy only for 1.5 years [instead of usual 4-5]. This doesn’t look right. It looks like [his diploma] was bought for ‘lard’,” he said.

As far as his formal education is concerned—it doesn’t really matter if Mr. Groysman ever stepped into the doors of this “Academy” with or without lard—the institution’s reputation is highly bizarre. In 2005, for example, MAUP became world-famous for inviting American Ku Klux Klansman David Duke to give lectures there; Mr. Duke later received his PhD degree in history from this “Academy.”

Mr. Duke’s doctoral thesis was titled “Zionism as a Form of Ethnic Supremacism.” The “Academy” was strongly condemned by Israel for its anti-Semitism and the denial of the Holocaust. According to some estimates, at one point MAUP was responsible for 84 percent of all anti-Semitic publications in Ukraine. The Anti-Defamation League strongly condemned the institution’s “anti-Semitic actions.”

Another minor detail: In 2007, 4,650 diplomas of the “Academy” were declared null and void by the Ukrainian Ministry of Science.

Being Jewish—as is President Poroshenko himself—Mr. Groyzman should not be blamed for having anything to do with the infamous reputation of the finished “Academy.” But his “1.5 years” of undergraduate study in MAUP will give the impartial reader the idea of the quality of education Mr. Groysman received. Obviously, the new Ukrainian Prime Minister didn’t trust his Alma Mater to be attended by his daughter—he sent her to study law to London.

In 2005, Volodymir Groysman was appointed mayor of Vinnitsa without an election, and a year later he was elected to this post. Poroshenko’s Vinnitsa team “put its stake on a 28-year-old deputy of the town council,” 112Ukraine TV Channel reported. Ukrainskaya Pravda believed that both his father’s prominent role as the owner of the Vinnitsa market and his father’s influence in the town council also played a role.

Right after his son climbed to the top of the Vinnitsa executive power, the elder Mr. Groysman left the position of town council deputy and went back to managing his business projects. The Groysmans’ asphalt and concrete production plant was showered with contracts from the municipality—the town was in urgent need of road repairs. The money came from credits funded by EU financial institutions.

The new mayor quickly helped his father’s company renegotiate the lease contract on the half hectare of land in Vinnitsa in such a way that it became the family’s private property. In 2006, he declared unconditional war on the thousands of spontaneous street vendors who were forced to clean the streets and accommodate themselves on the organized marketplace owned by his father.

In 2009, on the spot of the old-fashioned marketplace, a huge MagiGrand shopping mall of 13,000 square meters was constructed. To build it, the Groysmans’ company “Yunost” took a bank loan of $11 million with the Groysmans’ newly-privatized land as collateral. Soon afterwards, the company declared bankruptcy. The loan was never repaid, but the land and the shopping mall somehow still belong to the Groysman clan, Ukrainskaya Pravda reported.

Meanwhile, under the young new mayor, Vinnitsa was changing rapidly—at least on the surface. From 2007 to 2011, as a gift from compassionate Switzerland, the town received 116 used street-cars from Zurich with the spare parts provided by good-hearted Swiss people longing to help Ukraine with reforms.

And it’s not only Swiss-looking used street-cars and fixed roads that made Vinnitsa look like a showcase European town within Ukraine.

Since 2011, the biggest dancing waters show in Europe, with installed fountains that shoot 229 feet into the air, is in Vinnitsa. It is called Fountain Roshen on Roshen quay, named after Petro Poroshenko’s candy conglomerate. The artificial geysers are accompanied by a music-and-laser show that resemble the Bellagio in Las Vegas. Tourists from all over Ukraine come to see what is considered one of the 10 most impressive shows in the world. It was built by a German company and cost 1.5 million euros, which was was donated by Petro Poroshenko.

According to Ukrainskaya Pravda, local politicians believe the generous and beautiful gift by Mr. Poroshenko to Vinnitsa was a partial compensation for the 16.4 hectares of the city land that had been sold to the Roshen factory in 2008 by then mayor Groysman. The price tag for the land was one third the estimates of local realtors.

Back then, its mayor swore to residents to never leave his town until it was turned into a “smile-city.” But the vortex of the Maidan revolution two years ago that brought his patron Petro Poroshenko to the top of Ukrainian politics made him alter the pledge.

The new Ukrainian President a needed his loyal Vinnitsa vicegerent as the Speaker of the Ukraine’s Supreme Rada to counter-balance the all too independent PM Yatsenyuk.

Since last week, after Mr. Yatsenyuk was sacked and Mr. Groysman took his spot, some obvious changes in the Cabinet are clearly visible.

There will be no more foreigners in the new Ukrainian Cabinet; heralded “technocrats” from USA, Georgia and Lithuania of the previous period are all gone without fanfare. Mr. Groysman brought into the Cabinet two of his deputies from Vinnitsa instead, plus a third loyalist from Kiev (but with strong Vinnitsa ties).

The stated goals of the new Cabinet stay the same—fighting corruption being number one among them.

Last week The Washington Post reported that the Ukrainian prosecutor general’s office confirmed it was investigating an allegation of a $3 million bribe given to resigned Prime Minister Yatsenyuk to appoint the head of the country’s broadcasting agency.

“Do you know what the difference is between Groysman and Yatsenyuk?” asked an undisclosed politician close to the Ukrainian president’s administration of a reporter of Ukrainskaya Pravda in a rhetorical question. “When Volodymir [Groysman] will start stealing, he will steal off the profit. Yatsenyuk was doing it off the loss.” 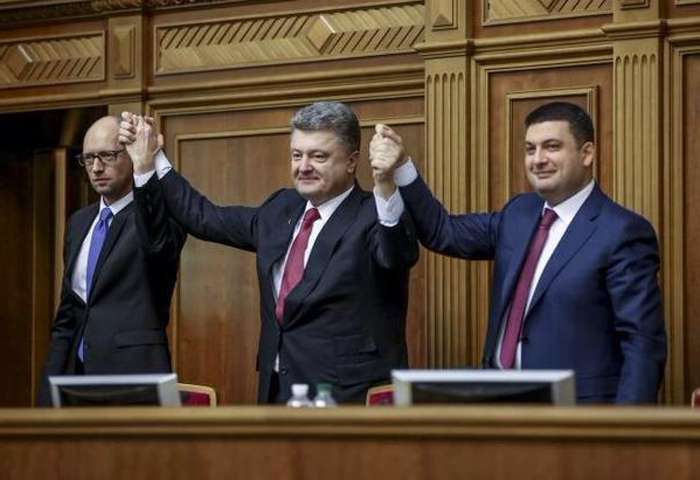