When Bill Clinton completed his last term as President in 2000, Hillary ran for New York’s open seat in the Senate. Coupled with the retirement of Daniel Patrick Moynihan, her husband’s name recognition and pull in the Democratic Party almost guaranteed Ms. Clinton wouldn’t be challenged in the Democratic Primary. A Republican was even less likely to defeat her in the blue state, as New York City Mayor Rudy Giuliani had to recuse himself from the race due to health concerns. Ms. Clinton had no ties to New York, but it was the safest bet to start her own political career.

As Senator from 2000 to 2008, Ms. Clinton did more to help herself than New York, particularly when it came to continuing Mr. Clinton’s efforts to deregulate Wall Street.

“Of the 189 Senate bills that their lobbyists identified as significant banking or finance legislation, she cosponsored only 25,” wrote the Boston Globe this past January. Of those 25 bills, most were backed by Senator Chuck Schumer of the Senate Banking Committee. With Ms. Clinton stepping aside to let Mr. Schumer take the lead, some of the largest financial firms including Goldman Sachs, Citigroup, and Bank of America poured donations into the Clinton Foundation and paid exorbitant speaking fees to both Bill and Hillary.

As Senator, Ms. Clinton co-sponsored 711 bills, with only three passed into law: One designated a national historic site and the other two renamed a post office and highway. Politico ran an article in late 2015 featuring Ms. Clinton’s supporters citing her accomplishments. Most of their responses were vague and many examples weren’t accomplishments at all—work on climate change at Copenhagen was a disaster, her foreign policy was interventionist and helped create the political vacuums which harbored the rise of ISIS—leaving the United States worse than it was when she started as Secretary of State. Ms. Clinton was a lame duck in congress and her tenure as Senator for New York was merely a political stepping stone toward her 2008 presidential campaign. The Clintons have made millions of dollars networking with powerful corporations and politicians, turning a blind eye to the fact that some of their biggest donations come from countries notorious for violating human rights.

With today’s New York Democratic Primary, Hillary Clinton wants New York to appear to be her home state. While introducing her at a campaign rally at the Apollo Theater in Harlem, Mr. Schumer mocked Mr. Sanders’ Brooklyn accent: “She may not always tawk like we Brooklynites tawk,” he said, before diverting to meaningless praiseful rhetoric. Unlike Ms. Clinton, both Mr. Sanders and Mr. Trump were actually born and raised here.

In Ms. Clinton’s speech at the rally, she often cited 9/11, which occurred shortly after she became Senator of New York. She took credit for securing relief funds from the federal government, failing to recognize that, given the immensity of the disaster, such funds would have been allocated no matter who was Senator. After 9/11 both Ms. Clinton and Mr. Schumer were overshadowed by the political leadership of Republican New York City Mayor Rudolph Giuliani, who was dubbed by the mainstream media for his efforts “America’s Mayor.”

Hillary Clinton’s accomplishments for New Yorkers were few and far between, and even she herself would be hard-pressed to come up with a list of actual accomplishments she achieved as Senator to help New Yorkers. She came to New York, entitled to an open Senate seat, and now in 2016, is relying on New Yorkers to concede to this shameless entitlement again to voter for her as the Democratic Presidential nominee. 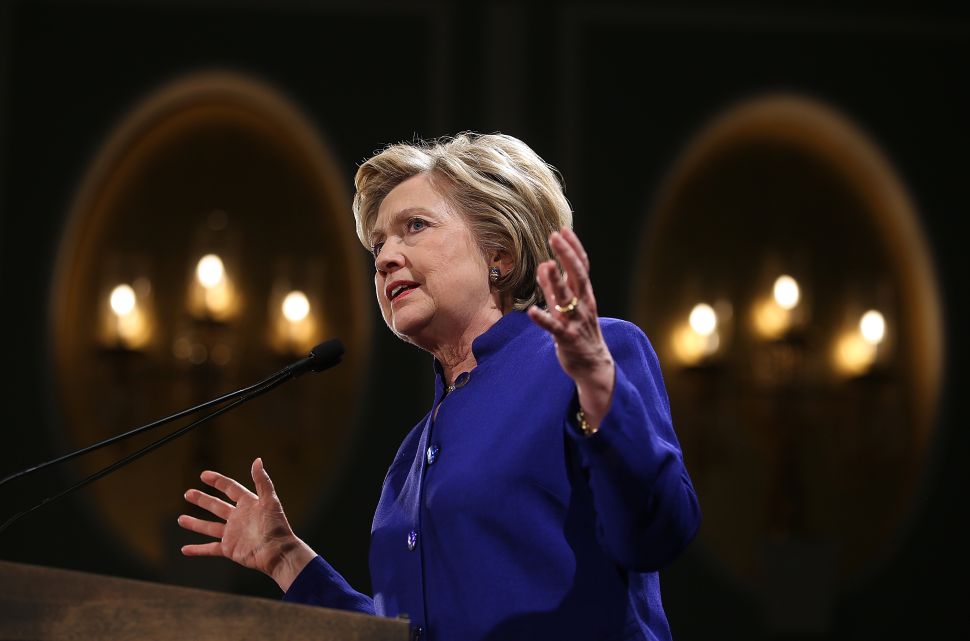