America has come a long way with sex—in general, we’re far less prudish than we were in years past—but still, as a society, we’re a little uptight about menstruation. Between spotting and leaking and the awkwardness of having to sneak away to “take care of it,” women are burdened with the unglamorous task of ensuring their periods are not just maintained, but hidden. Thankfully, for 14-year-old girls across the country, this is all about to change.

Entrepreneurs are disrupting the global tampon market—an industry projected to reach $6.2 billion by 2020. Politicians, too, have begun to take issue with the high cost of feminine hygiene products, with many states ending the “tampon tax.” And, for the first time in 100 years, the market is recognizing an opportunity for innovation when it comes to women’s needs. One could say the period is becoming sexy.

The first tampon, Tampax, was developed and marketed in 1933. Since then, there have been only two other major innovations catering to menstruation: Sanitary pads and the menstrual cup. But a new crop of startups—led by female entrepreneurs—are responding to this void.

“Innovation is really playing a part in the transformation,” says Miki Agrawal, CEO and Co-Founder of Thinx, an underwear company “committed to breaking the taboo” surrounding menstruation. “Women want to invent the products that work for us that were made by us.”

Brands like Thinx and Dear Kate have developed products that act not just as failsafes for days when periods come early, but can even replace tampons entirely. Thinx underwear—available in a range of styles, from thongs to hipster briefs—is cut from a fabric that pulls moisture and bacteria away from the skin, therefore able to absorb up to two tampon’s worth of menstrual blood for a period of up to eight hours.

‘Women who were rebelling against the secrecy of menstruation were silenced because the media didn’t find those stories compelling.’

“We want to be in every single women’s underwear drawer,” exclaims Ms. Agrawal, whose controversial marketing efforts were initially banned by the MTA for being “lewd” but were eventually plastered on NYC subways—erupting an intriguing discourse around periods. “We wanted to be where culture shifts and there’s no better way than in NYC subways,” she explains. Ms. Agrawal’s ad campaign featured women in various poses of discomfort wearing Thinx. Adjacent to the models are images of raw eggs and fruit, symbolizing ovulation and the female anatomy. Thinx’s campaign is a major departure from traditional feminine hygiene ads where woman run freely through fields. Ms. Agrawal captured the essence of how women really feel while menstruating, in a creative and artful way.

“Because of the media megaphone that [Agrawal’s campaign] had, that’s had a profound impact on the way American women are starting to engage and dialogue about these issues,” says Lauren Schulte, Founder and CEO The Flex Company, a product for “mess-free” period sex. The Flex is a disposable menstrual disc that creates a soft barrier to the cervix, temporarily blocking the flow of menstruation. Ms. Schulte, whose product will launch this fall, had to rework her marketing message in order to gain traction. Initially, the product was created as a tampon alternative. However, when the company began product testing, focus groups who were told Flex was for period sex were found to be more likely to continue using the product.

The lesson: Sexualizing periods make them somehow less uncomfortable to talk about.

“The bottom line is women have felt shamed for talking about their health,” says Michelle Haimoff, an author and feminist blogger. “Everyone’s very interested in breast cancer because God forbid women lose their breasts!”

Ms. Haimoff credits shows like Girls for this evolution. “The more authentic women start to act, the more advertisers and marketers say, ‘Let’s capture that authentic woman because that’s what consumers will respond to!’”

‘Women love buying products that speak to us and have a social mission.’

Pointing to Kiran Gandhi—whose blood-soaked leggings created a media frenzy after she ran the London marathon without using a tampon—Ms. Agrawal adds that “women are finding their voice… I think it’s beautiful to watch Rupi Kaur and Kiran Gandhi, who are menstrual activists, put out really cool music and poetry about this. It’s great.”

Ms. Kaur took to Instagram to showcase what real menstrual cycles look like. Lounging in blood-stained sweatpants, Ms. Kaur’s post was initially removed by the site and ignited an uproar by supporters of the artist’s work and message. Other artists like as Jen Lewis and Sarah Levy are also using imagery of their own menstrual cycles in an attempt to normalize discussions of the subject.

“Women who were rebelling against the secrecy of menstruation were silenced because the media didn’t find those stories compelling,” Ms. Haimoff explains. “We don’t need that media anymore. News stories can come from anywhere. People are creating their own news stories and spreading those stories virally.”

Ms. Schulte also sees new media as a propeller of these conversations around women’s periods, and pointed out that the first time people started talking about the pain points of tampons was not until the very successful 2014 Kickstarter campaign by Lily Cup was vastly covered in the media. “When mainstream media in America sees how well these articles about periods and period products are performing some of these stories get picked up.”

While Western societies are becoming a little less squeamish, most developing countries are so far behind that many women don’t even have access to feminine hygiene products. In many countries, women skip school and drop out of the work force during their time of month. “The health issues of these girls are just not being met,” Ms. Haimoff says. “Girls having access is just not a priority.”

To combat the issue, Thinx has harnessed the power of a give-back program to provide feminine hygiene products to girls in Uganda—partnering with the nonprofit organization AfriPads. After all, at $30 a pop Thinx can’t realistically make it into everyone’s underwear draw.

According to Ms. Schulte, millennials are—not surprisingly—their target market. “They are interested in new types of brands and products,” she explains. “Women love buying products that speak to us and have a social mission.”

But you don’t have to Uganda to find communities without easy access to feminine hygiene products. Upon realizing that low income girls in Queens were missing school when they had their periods, New York City Councilwoman Julissa Ferreras started providing free tampons in public school restrooms.

“There’s still a long way to go,” notes Ms. Agrawal, “It’s just a symbol of what women are not going to tolerate any more.”

Shiri Sarfati is a beauty and wellness expert. She is the Founder of BeautySomething.com, a news media site focused on trending and shareable beauty stories. She is also the President of Markati Group LLC, a digital marketing agency. A native New Yorker, she now lives in Miami. 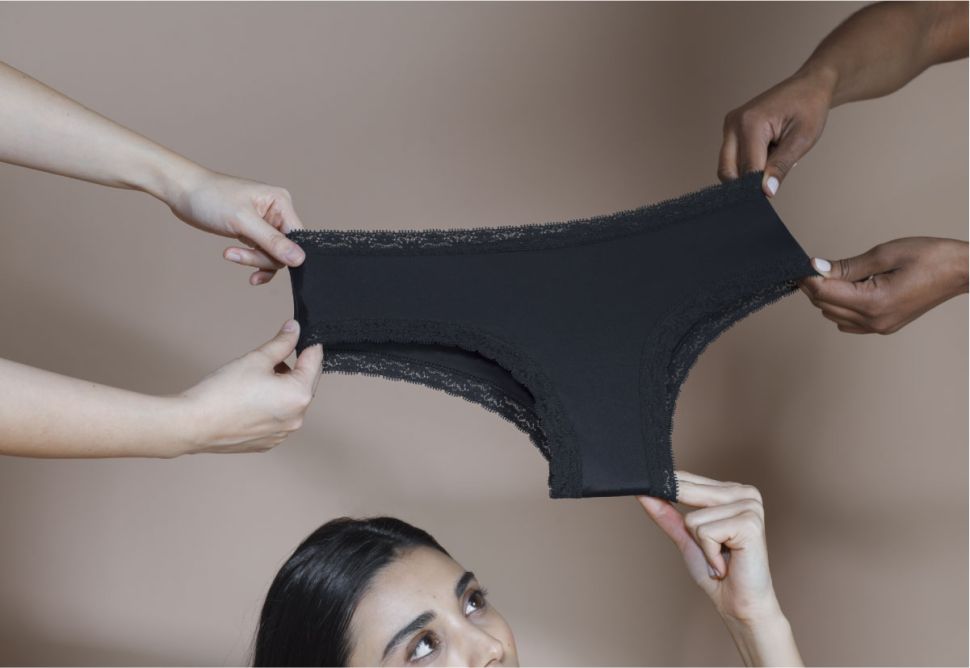