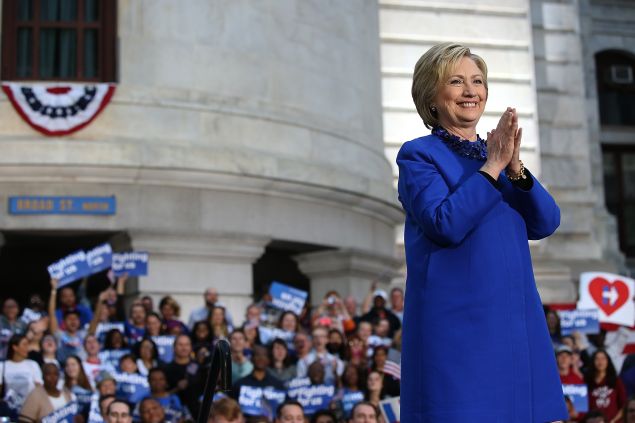 Reading the online posts of Bernie Sanders’ supporters can be a very interesting and educational exercise. Here, one learns many things. For example, Hillary Clinton is obviously a conservative, because she was raised by Republican parents in a Republican town and supported Barry Goldwater 52 years ago—before she was old enough to vote. Also, she rigged the recent New York primary to keep independents from voting. (One supposes the fact that the current system in New York is more than 40 years old is just proof of how far ahead the scheming, ambitious young Hillary Rodham was thinking at the time.)

Yes, there are many insights we can glean as we #FeelTheBern emanating from our computer screens. Or is that just radiation? Who can tell?

One of the themes that comes up time and again is that quite a number of Sanders supporters despise the Democratic Party. They see it as a collection of cowards and corporate sellouts, too compromising and not sufficiently committed to progressive ideals.

Their criticism is not entirely unjustified. One need only point to the numerous times Democrats in Congress backed down, rather than risk confrontation with the George W. Bush administration, to understand the frustration the progressive left feels with Team Blue. Exhibit A is the significant number of Congressional Democrats—including Ms. Clinton, it must be said—who voted in favor of authorizing Mr. Bush to take military action in Iraq, which hindsight has proven to be an ill-considered decision.

But it is also helpful to understand the context in which today’s professional Democrats have made these decisions. Many Democratic politicians today are guided by the lessons they have learned over the past 40 or 50 years, and the Democratic Party as a whole remains haunted by the electoral disasters it suffered in the 1970s and 1980s, as well as the bitter defeats of 2000 and 2004. In several of these defeats, the most liberal segments of the electorate either did not vote in large numbers, or cast their votes for independent or third-party candidates who had no chance to win.

The real starting point was the election of 1972. In the wake of the passage of the 26th Amendment to the U.S. constitution allowing citizens aged 18-21 to vote, some Democrats became convinced that a wave of young, liberal voters would help propel the very liberal Democrat George McGovern to the presidency. Not only did young voters vote in small numbers as compared to their numerical weight, but they split their votes between Mr. McGovern and incumbent Republican President Richard Nixon, doing nothing to dent Mr. Nixon’s massive, 49-state landslide. (Young Hillary Rodham and Bill Clinton worked in Texas for Mr. McGovern that year, and no doubt they drew a number of conclusions from the experience that have guided their political careers ever since.)

Another seminal moment came in 2000, when Democrat Al Gore won more votes nationally than his Republican opponent, Mr. Bush, but lost at least two key states that he would have won with the support of voters who cast their ballots for Ralph Nader. Disenchanted with Mr. Gore, who some on the far left considered too moderate, approximately two percent of all voters nationwide cast their ballots for Mr. Nader. Their decision was critical in Florida and New Hampshire, whose electoral votes ultimately went to Mr. Bush and gave him a narrow, 271 to 266 victory in the Electoral College.

Even leaving aside the very messy situation in Florida that year, it is mathematically indisputable that Mr. Gore would have won New Hampshire—and the election—had just one-third of Mr. Nader’s voters in that state voted for Mr. Gore instead. These Nader-voting progressives proved to be their own worst enemies, handing over the keys to the White House to a Republican president who eventually gave us the Iraq war, the worst economic crash since the Great Depression, and Justices John Roberts and Samuel Alito.

In every election, the youngest potential voters—who often tend to skew more liberal than the population as a whole, with 2004 being a rare but notable exception—have consistently made up a smaller share of the electorate than their share of the population. In short, young Americans don’t punch at their weight level, numerically speaking. And the far left as a whole has demonstrated—by withholding a crucial portion of its votes from Mr. Gore in 2000, and with as many as one-third of Bernie Sanders supporters telling pollsters that they will not vote for Ms. Clinton this November—that it cannot be counted on to support the most electable liberal candidate in a general election.

By withholding or threatening to withhold their votes, progressives are actually decreasing their power and influence rather than increasing it. The business of politics is predicated on finding reliable voters who can be counted on to deliver their votes. It simply makes no sense to move to the left, and possibly alienate more centrist voters, if progressive voters cannot be counted on to turn out or support the Democratic candidate in the fall. If young people and progressives continue to be unreliable, Democrats will naturally move to the center to make up the shortfall. This is a matter of basic arithmetic.

Progressive votes withheld from Democrats in a general election benefit nobody but the Republican Party.

As much as politicians are maligned, their motives are familiar to all of us. Having landed a good job, the politician hopes, first and foremost, to keep that job, and perhaps one day to get a promotion. Nobody who has a job is going to take actions that will displease the individual or individuals who determine whether she keeps that job.

And as much as some people don’t like to hear it, our system simply makes it nearly impossible for anybody but a Republican or a Democrat to win most elections, beyond city council races in really liberal cities. Given that reality, progressives must either actively support Democrats, or passively assist the Republicans. It’s that simple. Progressives who want to move the country leftward gain nothing by voting for the Green Party. Progressive votes withheld from Democrats in a general election benefit nobody but the Republican Party.

It may gain one nothing with progressive readers to quote Ronald Reagan, but he did make an excellent political point from which the far left could benefit. Mr. Reagan, troubled by die-hard conservatives who opposed to any compromise with the center or the left, noted that someone who voted with him 70 or 80 percent of the time was not his enemy, and that sometimes, you have to take the deal that’s available now and come back for more another time. “If I can get 70 or 80 percent of what it is I’m trying to get,” Mr. Reagan said, “I’ll take that and then continue to try to get the rest in the future.”

A couple of facts are important here: Ms. Clinton voted with Mr. Sanders 93 percent of the time when they were in the Senate together, and she was consistently rated among the most liberal members of that body during her eight years in office. She is not a conservative, and she is not the enemy of progressivism. In fact, she finds herself in a position today to do more for the progressive cause than any president since Lyndon Johnson.

The current vacancy on an evenly divided Supreme Court bench, which will be filled by the next president, could tip the nation’s highest court into the liberal camp for a generation. It is here that equal marriage rights, transgender rights, reproductive rights, collective bargaining rights, voting rights, campaign finance restrictions, and a slew of other issues crucial to progressivism will either be upheld or shot down in the coming years. If a Republican becomes the next president with the assistance of progressives who stay home, vote Green or write in Mr. Sanders, that golden opportunity will be lost for another generation. But if Ms. Clinton becomes president and Democrats regain control of the Senate, the court tips to the liberals, and with it, the nation’s direction in social and economic policy.

For disenchanted liberals, it may well be tempting to say “I voted my conscience” and let the chips fall where they may. But at this point in our history, with the Supreme Court hanging in the balance, now is not the time to make a point, or to punish the Democrats for their failures, real or perceived. If progressives want to move the Democratic Party to the left, it’s time to show the party they’ve got its back. And it wouldn’t hurt to vote in the 2018 midterms, either, when Democrats will be in serious danger of losing numerous Senate seats captured in their 2012 victory.

Progressives, the future is in your hands this fall. By all means, vote for Mr. Sanders in the remaining primaries if that’s your choice. But if, as it appears clear now, Ms. Clinton wins the Democratic nomination, please be smart, be strategic, and do the responsible thing in November.

It is better to hold your nose and vote for Ms. Clinton than it is to cut it off to spite your face. If you want to teach the Democratic Party a lesson, teach it that you can be counted on and that moving to the left is a risk worth taking. 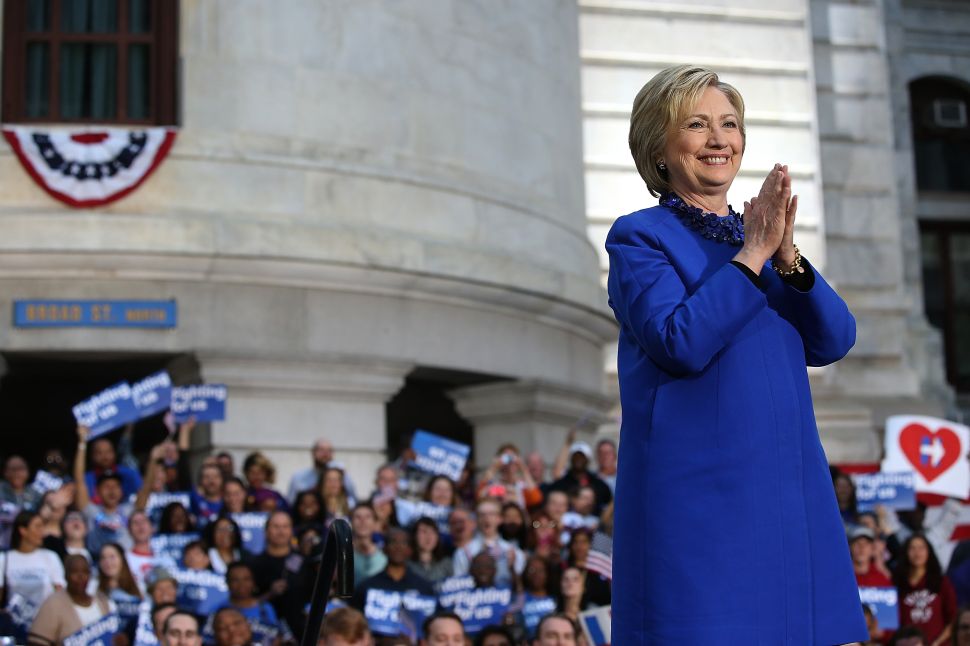