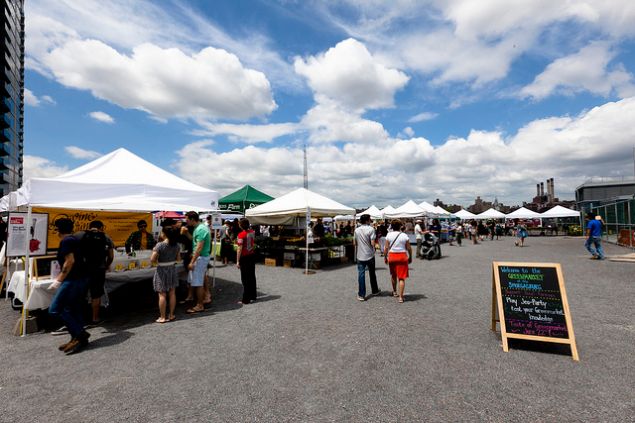 Smorgasburg will return on Saturday to the relief of food bloggers everywhere! (Photo: Dan Nguyen/Flickr)

The average residential apartment in the city has topped $2 million for the first time, per Douglas Elliman’s most recent quarterly market report, writes The Real Deal. It went up more than 18 percent—the median price was $1.1 million at this time last year. Appraiser Jonathan Miller of Miller Samuel, the author of the Elliman report, noted that new development closings drove prices higher during the quarter, and new condo sales are moving right along—the number of new development sales has surged 94 percent during the first quarter.

Despite such news, however, those waiting to see the reported $60 million penthouse at 111 West 57th Street are going to have to wait a little longer, reports Bloomberg. The developers behind 111 West 57th Street are holding off on sales for one more year, until the building gets to at least 800 of its total 1,427 feet.  Kevin Maloney, the principal and founder of co-developer Property Markets Group, told Bloomberg that “if the market were red-hot, people would be buying off plans, throwing checks down, and it’d be great…But if you have a market where you think marketing would be ineffective for now, why would you launch and spend the money? Wait.”

One man’s Great Gatsby dreams seem to be coming true—Songza CEO Elias Roman and his wife, Sarah Jane, have purchased a Queens replica of F. Scott Fitzgerald’s Long Island mansion, per the New York Post. Mr. Roman paid $2.4 million for the Mediterranean-style waterfront home at 122 Grosvenor Street, which was built circa 1920 by the same architect who designed the Long Island home where F. Scott Fitzgerald and his wife Zelda lived before heading over to the South of France. It’s also the former residence of Governor Andrew Cuomo, who lived there with his then-wife Kerry Kennedy. Mr. Roman’s new six-bedroom, 4.5-bath pad was listed by Douglas Elliman brokers Michael Bisiti and Micahel Stanco, and it’s already listed for rent for $6,000 a month.

With the emotional loss we are all feeling over the removal of the beloved waffle fries from Madison Square Garden (sadly, not an April Fool’s), perhaps it’s time to start supporting the Yankees a bit more, since they’re going to have cold egg creams this baseball season, via DNA Info. Along with more classic food stands, Linda’s Egg Creams will offer a more eclectic menu of egg creams, hot soups, sandwiches and sundaes at Yankee Stadium.

In other food news, Smorgasburg is returning to East River State Park and Prospect Park tomorrow, says DNA Info. The open food vendors’ market will be back on the Williamsburg waterfront this weekend, and it’ll have 25 new stands. Food lovers, bloggers, and Instagrammers, prepare yourselves—there will be waffle ice cream cones, homemade fresh mozzarella, and Venetian sandwiches galore. There will even be artisanal banana pudding in flavors like s’mores and matcha. Not to worry if you aren’t able to make it this weekend—it’ll be there every Saturday through the spring, summer, and fall.

Gary Barnett’s Extell Development is looking at an Asian investment project, One Manhattan Square, through the EB-5 visa program, according to The Real Deal. The program offers foreign investors a U.S. green card in exchange for a $500,000 investment, and Extell is hoping to raise between $100 million and $200 million for the 815-unit project. One Manhattan Square is located at 252 South Street, and will rise 80 stories and 815 units, and Extell already launched in Asia, giving Chinese, Malaysian and Singaporean buyers the first shot at the units. The firm has run into a few problems with the building construction thus far—the total sellout price was dropped by $207.3 million to $1.87 billion, and the Department of Building temporarily halted work at the tower in February due to complaints from adjacent building residents. 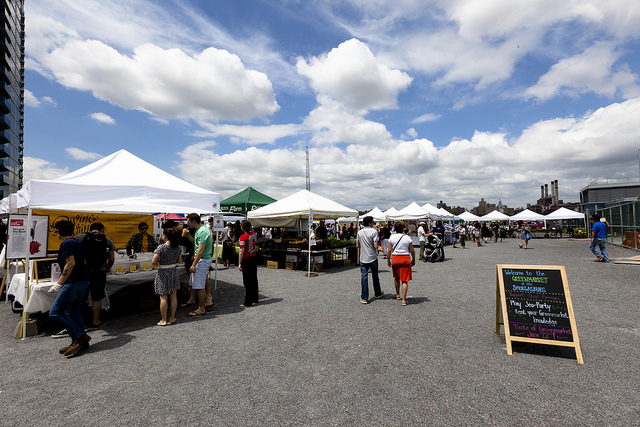