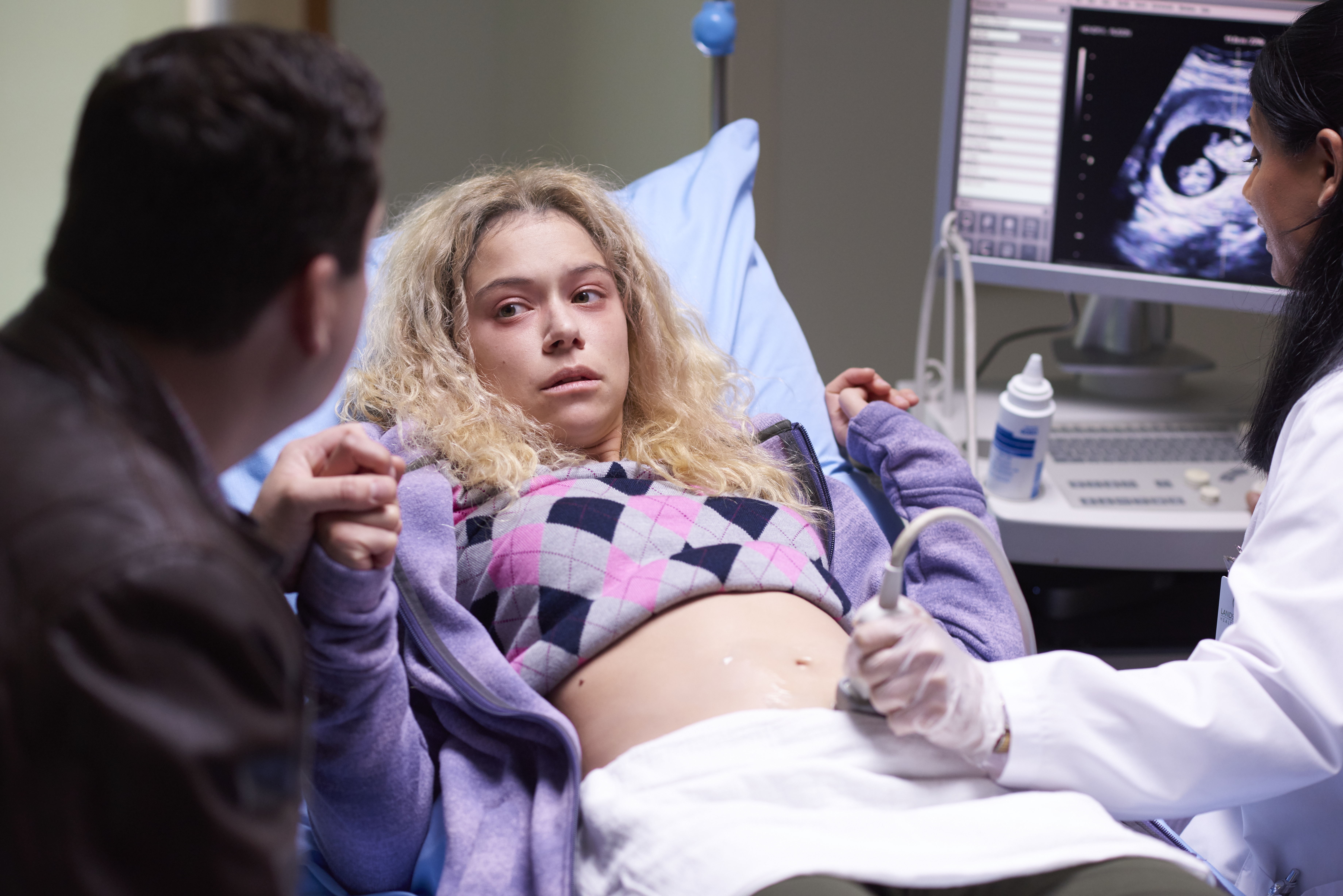 So now we’re back to the present—but still very much dealing with the past. Because how could we not be?

The revelations came fast and furious last week, and now Sarah and Art are headed into the muck of the past, to try to make sense of what they know now.

The big challenge Orphan Black has set for itself is how to answer the same question Sarah has: Why are we only finding out about all of this now? Why didn’t we know about these things—the unraveling of Beth’s life in her final days. Beth’s last case, the murdered man with his cheek cut out (involuntarily) and his penis split in two (voluntarily) About the existence of M.K., who knew Beth and has been involved with this whole thing since the beginning. Where has all of this information been hiding, and why?

The show only does a half-decent job explaining what is amounts to a pretty serious retcon. M.K. is paranoid and not altogether stable, so it does make some sort of sense that she’d want her existence hidden from the other clones, and after Beth died, that she steered clear lest she put anyone else in danger. She’s only emerging onto the stage now because she needed to warn Sarah of the imminent Neolution attack on their hiding place in Iceland.

But surely this isn’t the first time she could have intervened to help her sisters out, so why now (other than that it is now convenient for the show to reveal her)? And how effectively could she really have concealed her existence while living in the same city with at least four women who share her face? Sarah has only been at Club Neolution for a few minutes before someone mistakes her for M.K. (It turns out the first rule of Clone Club is not, in fact, “You do not talk about Clone Club,” but “If you enter the city of Toronto or its environs, you will be misidentified as one of your sisters that day.”)

And then: Art. He only now thinks to look into the last case Beth was investigating before she killed herself? Only now considers that this case, obviously Neolution-connected, might have something to do with the clone conspiracy? And only now brings it to Beth’s attention? Art’s intuition that M.K. was the confidential informant who led them to Mr. One-cheek-two-dicks is correct, but it didn’t have to be. A more evident chain of logic would have been, many months ago, to think: “Oh, Beth turned out to be a clone—weird, because her last case was all about fringe body science. I wonder if they’re connected?” But somehow he didn’t connect these dots until now?

And Sarah is too smart to have waited until now to investigate the contents of Beth’s house? She lived in that house for weeks, pretending to be Beth. Surely she had ample reason to do some digging then, considering she was impersonating  the person who lived there?

But nope, none of that happened. Instead, all of this activity and sudden interest in the past is sparked by M.K.’s phone call to Iceland.

The call inspires Sarah to instantly pack it all up and head back to Canada. Mrs. S, for once the least paranoid person in the room, suggests it could be a false alarm. But nope: Kira spies lights coming over the tundra. So they pack themselves and crotchety old Kendall Malone into a truck and then burn their life in Iceland down to the ground. The camera focuses on the flames as they engulf Kira’s stuffed monkey—an inauspicious symbol, considering that “monkey” is Sarah’s nickname for the kid, who is never quite out of harm’s way on this show.

They trundle back off to Canada, where Cosima and Scott are waiting for them in their secret lab, which is hidden underneath a comic book store with the hilariously on-the-nose name of Rabbit Hole Comics. Cosima’s still sick, as the gene therapy is going slower than expected. And still heartsick, not knowing whether Delphine is still alive or not.

While Kendall Malone gets her checkup (she’s got leukemia, and swears Scott to silence) and Mrs. S vainly tries to comfort Cos, Sarah heads out with Art to get to the bottom of the M.K. thing. They find Beth’s surveillance tapes, which show them just how screwed up she was in those last days, including pointing a gun at Paul, and later going out in a blond wig and possibly murdering someone. She returns home with hands covered in blood—whose blood, we’re not told, adding yet another ominous mystery to the pile.

Also appearing on the tapes is Trina, the pregnant Neolutionist the one whose boyfriend was murdered by the scary EMTs when they harvested the worm in his cheek. So Sarah decides to go back to Club Neolution to try to find her, roping a reluctant (and half-dressed as usual) Felix into helping her.

Felix is remote, acting like a petulant child, but it’s hard to blame him. Once he was one-half of a pair of delinquent foster kids; it was them against the world, making their own family because they had none of their own. Now, Sarah has nothing but family; literally everyone in her life is related to her in some way—except for Felix. It’s not hard to see why he feels left out (even if he was invited and declined to come along on their Icelandic escapade). He reveals that he has been looking for his birth parents, which throws Sarah for a loop.

Sarah doesn’t help things between them by basically pulling a bait and switch on him: Hey, let’s go get a drink and catch up, j/k I just need you to sneak me into Club Neolution and then I’m going to sort of ignore you while I do fake police work, k?

She’s an awful detective, though, and instead of finding anything out about Trina, she’s mistaken for M.K. by a crusty dude named Dizzy, who shows her a video he found of someone trying to remove a worm from his cheek and getting very dead for his trouble. The worms have “a built-in defense mechanism,” Dizzy explains, and for Sarah, this video is the real entrance to the rabbit hole. This is the first she’s hearing of these gross face crawlies, and they’re already killing people.

She goes laundromat where Dizzy was supposed to meet M.K. and they talk. M.K. is characteristically cagey, but she reveals how and why she helped Sarah, and why she has kept her distance so long. She also refers to the cheek worms as “maggot-bots”—so maybe they’re not actually organic somehow?

M.K. runs away just in time for the creepy EMTs, talking some Scandinavian (I think), language, to arrive and tackle Sarah, who is mistaken for M.K. for the second time that day. They realize it’s Sarah instead when they stick their fingers in her mouth and find the little worm growing in there. Which, obviously, sends Sarah into a blind panic back to Mrs. S to see whether Dyad implanted something alive in her face when they had her. A flashlight reveals the ugly truth and immediately ups the body-horror quotient of this show immeasurably.

Oh, also Helena is pregnant with identical twins and is (badly) pretending to be Alison to take advantage of Canada’s lovely socialized medicine for her prenatal care. She’s taking the role a bit too seriously, though, and poor Ali is feeling jealous and put-upon rather than flattered. At least the two of them and Donny provide a bit of comic relief in an otherwise harsh episode.

But the best parts of “Transgressive Border Crossing” are the scenes of Sarah going through Beth’s old things, interspersed with yet more flashbacks to Beth, in that same apartment, on the last day of her life. Art comments that the two of them are more similar than they know, and these lovely vignettes—in which Sarah puts her hand on the fridge and then Beth opens it, or Beth almost seems to hear Sarah calling her from the other room—draw lines between them in subtle and complex ways.

Of course, mirroring is the essential form that structures all of Orphan Black, and the show continues to use them so, so well. In this episode alone, there are dozens of them: Kendall Malone’s leukemia paralleling Cosima’s still pervasive respiratory illness. Felix’s jealousy at Sarah’s new extended family finding its echo in Alison’s jealousy that Helena is not only able to have kids (she calls her “fertile Myrtle”), but is having twins.

M.K. making Sarah put her boots on a table as they talk (presumably so she can’t chase her if she realizes she’s nearby?), just like Beth took off her shoes on the train platform right before killing herself. Even down to Felix’s exposed ass cheeks suggesting the much-less-humorous “exposure” of Sarah’s cheek.

And, of course, horrifyingly, the new life growing inside Helena, paralleling the sickening discovery that Sarah has a living thing incubating in her own face. 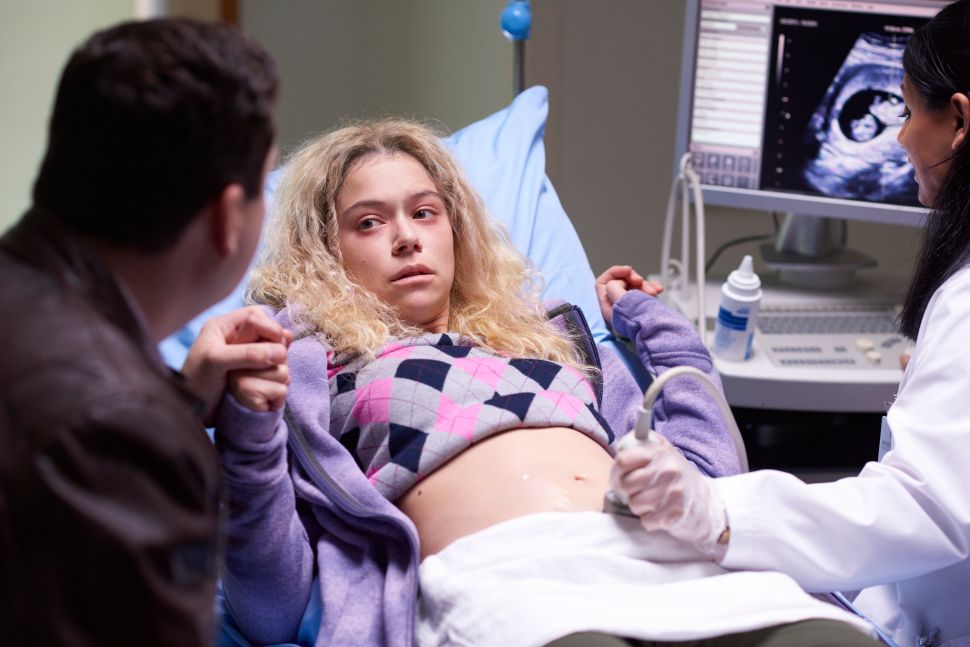