Aaaaand, we’re back! Way, way back, in fact. A couple of years back, to before this whole crazy thing kicked off.

See, in a bold move even for a show not known for pulling punches, instead of carrying the story forward, this season’s premiere is almost entirely a flashback. Filling in the backstory of a figure who looms large over Orphan Black, but who died in its very first episode: Detective Beth Childs.

For all its sci-fi cred, Orphan Black is primarily a thriller, taking us through twists and turns, shifting alliances and realities, always keeping us off-balance. And it’s challenging for a show like that to devote an entire episode to a flashback without seriously squandering its momentum. After all, we already know what happens to Beth: She jumps in front of a train. We even pretty much know why: She shot and killed an innocent person and her career was in jeopardy. Oh, and also her ridiculously muscular boyfriend turned out to be spying on her for a shadowy organization. So how can a show build suspense—especially after a 10-month hiatus—by telling us a story we already know the ending to?

The short answer: by showing us that that story isn’t over, not by a long shot. From the very beginning, much of the thrill of watching Orphan Black, and much of the suspense it generates, has been not just in the twists of its story, but in the twists of how that story is told, how the writers play with and subvert narrative expectations to always make us question what we think we know. (Hopefully, with the advent and critical acclaim of the even-more-narratively-subversive Mr. Robot, hope we’ll be seeing more of this kind of storytelling in the future.)

In this case, by going backward in order to move forward. It turns out that Beth’s story is both exactly what we thought it would be and not at all what we expected. And yes, it’s thrilling, all the way through.

Not to say that the episode isn’t without its missteps. Not every character needed to have a cameo in this flashback. As much as I will never complain about getting more of Jordan Gavaris and the best fake accent on television (he’s Canadian!), showing Felix being booked for solicitation while Beth is mere feet away in the police station goes too far. How did Dyad think it was going to avoid the clones finding out about each other if “You look exactly like my sister!” coincidences were this likely?

Alison and Cosima also make brief appearances, on the other end of phone calls with Beth, who is just starting to piece together clone club with the help of M.K., a brand (!) new (!) clone (!). Cosima is in the process of moving to Canada to be closer to her sisters, while Alison is fully enabling Beth’s pill habit (and incidentally showing that she was actually a drug dealer long before she was, y’know, a drug dealer) by sending her pills and bottles of clean piss so she can pass police drug screenings.

M.K., possibly named Mika, is presented as one of those wacko conspiracy theorists who just so happens to be completely justified and correct in every paranoid fantasy she has. She is, in fact, the subject of a conspiracy, they are in fact watching her, events are just as sinister as she thinks they are, etc. She also forms one of the episode’s only explicit bridges to events in Orphan Black’s current storyline, as she appears in the episode’s final scene, in the present, calling Sarah up in Iceland and warning her of an imminent Neolution attack.

But M.K. is first introduced wearing a fairly creepy sheep mask, waking Beth up in the middle of the night to tell her that some evil Neolutionists are burying a body in the woods, thereby setting the events of the episode in motion.

When Beth answers the phone, we don’t yet know who she is—I assumed she was Sarah—and it’s only after M.K, signs off with “Don’t trust who’s next to you” that we see that also in the room are the absurdly well-defined abs of one Mr. Paul Dierden, who is very much not exploded and also wondering who is calling his cop girlfriend in the middle of the night.

And then M.K. removes her mask, showing us…well, not much. We see it’s Tatiana Maslany, of course, and therefore a clone, but we don’t know who this one is. The scene is constructed like it is another “reveal,” but it actually reveals almost nothing. We expect to see a surprising face when someone removes a mask (especially just before going into the opening credits). But the face we see is exactly the one we knew we were going to see—and yet it shows us nothing about who this person is, because that particular face is by now just another mask, in its own way.

Again, Orphan Black uses the unique qualities of its narrative, and especially Maslany’s tremendous performance, to play with our expectations, to make us question ideas we take for granted—like what it means for a show to have distinctly recognizable characters, or even to be a character.

And this is the real genius part (have I mentioned that I love this show?): This narrative move lets us a little bit into the experience of what it must be like to be Beth Childs. Because Beth is experiencing this same kind of doubt about her own character, on an existential level.

See, she is not dealing very well at all with finding out she’s a clone. Sarah was thrown back on her heels a bit by the discovery, of course, but it sends Beth into a full-blown crisis of identity. Finding other people who wear her face has shaken her to the core, making her doubt her own existence, her own selfhood, on a basic level. Not helped much, of course, by her rather massive pill habit, which would frankly have put Doctor House to shame on his worst day—crushing them up and snorting them before breakfast, downing them by the handful in her car and even the police station.

And also not helped by the fact that her whole relationship has turned out to be an illusion, a fraud. She gives Paul both barrels of her identity crisis, begging him to look at her, to actually see her. “You’re supposed to reach inside me!” “Can you knit me together, or just tear me apart?” “Kiss me, make me feel real please!” He can do none of those things—he’s even less real than she is at this point. And so she just spirals further and further out of control.

M.K.’s tip leads Beth and Art to the body of one Edward Capra, who has had his cheek surgically removed after death, but also had some pretty radical body modification while still alive, including “bifurcated” man-parts. Beth chases this lead to Club Neolution, where the dumbest, most annoying fringe of the Neolution movement hangs out, wearing their one white contact lens and implanting magnets in each others’ fingers. Beth sidles up to a heavily tattooed pregnant woman and casually wonders if someone who can do implants like that could also, say, split someone’s dick in half for them?

Instead of answering her question, Preggo Magnetfingers offers that dick-splitting isn’t an implant, it’s an alteration. Right, thank you for that very important distinction, Ms. My Avant-Garde Rebellion Consists Primarily of Wearing a Creepy Contact Lens. Oh, getting your penis chopped in half is called altering it? Thanks so much for letting us in on your esoteric body-mod industry lingo.

God, these people are such awful, awful dorks. It’s not hard to see why (in last season’s finale) Ferdinand expressed his hatred for Neolutionists with a cudgel-wielding rage, despite being somewhat politically aligned with them. Every time one of them drones on about “self-directed evolution,” I want to take a baseball bat to them myself. Didn’t any of these people pay attention in eighth-grade bio? Changing your body is not evolution, kids. Giraffes didn’t get taller by stretching to reach higher leaves. You may be changing your form in radical ways, and more power to you for resisting bodily determinism and choosing to reshape your biology in whatever way you want. That’s awesome. But you’re not evolving. Evolution involves changing the species, not your own self. You can give yourself a creepy tail, but you’re not passing that thing on to the next generation.

Now, the experiments going on at Dyad, those are something else again. Beth follows the clues to not-yet-shot Doctor Leekie, who seems somewhat bemused to be brought face to face with one of his beloved clones. Beth also meets Leekie’s colleague Evie Cho, who’s apparently in charge of removing people’s cheeks.

Turns out the boyfriend of the pregnant Neolution chick is next in line to get his face cut open, so Beth follows her lead to a back alley in Chinatown. Peeking through a window, she learns that these people are tricking body-mod fetishists into letting them implant eggs in their cheeks, to be incubated inside their bodies into some kind of parasitic worm. Remember that nasty thing that Doctor Nealon tried to force into Delphine’s mouth? Just yet another layer in the creepy-ass onion that is Neolution. And this whole flashback seems aimed at showing us these crawlies will be a major aspect of this season.

Beth also discovers that a detective in her precinct is working for these cheek-slicing worm-incubators, and reeling from these discoveries (not to mention from the truly staggering volume of pharmaceuticals in her bloodstream), she clatters down into the street and randomly shoots at the first sound she hears, killing the innocent woman whose death is what sends Beth into the last whirl of her spiral. Launching her off toward Sarah and that fateful encounter on the train tracks.

Goodbye, Beth. We hardly knew you. But now at least we knew you a little bit more. 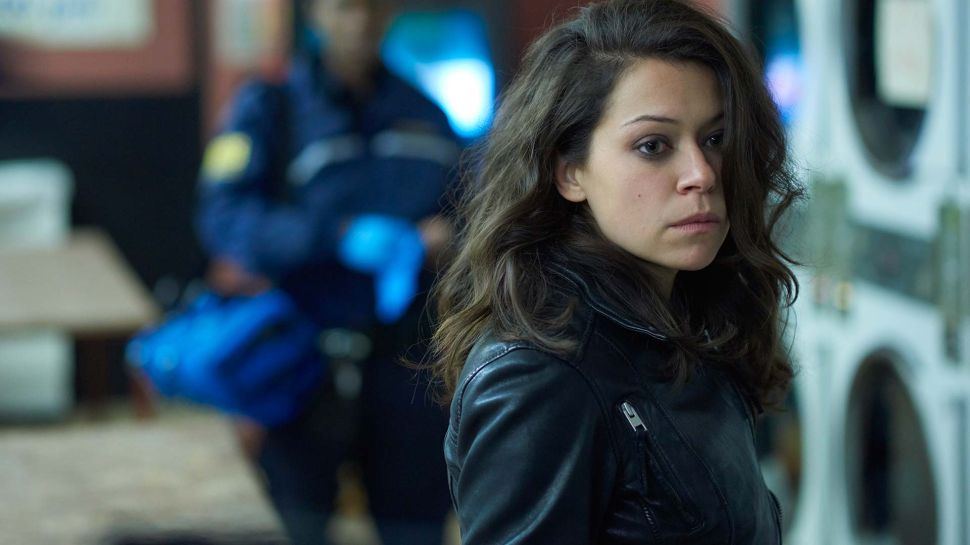