For a century since Albert Einstein first published his groundbreaking general theory of relativity, the world’s top minds have sought to discover if the predictions stemming from his theory hold true. One of these minds, Kip Thorne, has spent his career investigating Einstein’s claim that gravitational waves do exist and is regarded as the world’s leading expert on the subject. Thorne is now on the cusp of one of the most startling scientific breakthroughs in modern human history: the detection of these waves.

As a professor of theoretical physics at the California Institute of Technology, Thorne published numerous books and papers on gravitational theory. In 1984, Thorne co-founded the LIGO (Laser Interferometer Gravitational Wave Observatory) Project which uses lasers to measure tiny distortions in the fabric of space-time—distortions that could be caused by gravitational waves.

In 1994, he wrote the award-winning Black Holes and Time Warps: Einstein’s Outrageous Legacy, a book that connects mainstream audiences to his complex field of study. A decade later, Thorne became the scientific advisor on Interstellar and provided the math needed to accurately provide the film’s grand visuals. He also published The Science of Interstellar with a forward from Christopher Nolan.

On September 14, 2015 , scientists working at twin LIGO detector sites in Livingston, Louisiana and Hanford, Washington were sworn to secrecy after initial data indicated the detection of a violent cosmic event that occurred a long time ago. After months of checking and rechecking the data, and with news beginning to leak to the public, researchers at the CalTech and MIT-operated LIGO laboratories announced the extraordinary detection of gravitational waves. As a new window to the universe, the waves have revealed the merging of two black holes almost 1.3 billion years ago.

The Observer sat down with Kip Thorne before his multimedia collaboration with VFX master Paul Franklin and Oscar-winning composer Hans Zimmer on Warped Side of the Universe, to discuss Einstein, gravitational waves and his work on Interstellar.

What is Einstein’s theory of general relativity?

It is a framework for all of the laws of physics except the quantum laws. People usually say “well, it’s his theory of gravity” but it’s far beyond that. He built this theory in order to explain gravity but in fact that theory does a lot more than that. It tells you how all the other laws of nature fit into space and time.

It is the most accurate way we know to describe nature in what we would call the classical domain which is everything except when you get down to the very small—things like atoms and molecules.

How does Einstein’s theory connect to gravitational waves?

Einstein formulated his general theory of relativity in a very intense effort that lasted from 1905 to 1915 and he completed the theory in November of 1915  – just a little more than a hundred years ago. He then started using the theory or these laws that he developed – to make predictions. One of the most important predictions and the last major prediction he made, was that gravitational waves should exist. He predicted that in June of 1916 so we’re now we’re talking just two months from the centennial of the gravitational wave prediction.

He looked at the predictions, looked at the technology of the day, and looked at things that might produce gravitational waves in the universe and concluded that it was hopeless that we’ll ever see them. We just would never have accurate enough technology.

He was wrong. We saw them for the first time last September.

In the timeline from Einstein’s predictions to the recent discovery of gravitational waves, what was the turning point that led to a breakthrough?

Well there were a few turning points. The two most crucial turning points came from two particular people. Joseph Weber, around 1960, devised an approach that looked like it might be capable of seeing gravitational waves and he embarked on the effort to find them. He was the first person to question Einstein’s dictum that we wouldn’t have the technology to do it. Weber didn’t see gravitational waves. He thought he did for a while but didn’t actually see them. The waves are weaker than he had hoped but he broke the logjam of people thinking you just can’t do it and he inspired others. Including me.

The second turning point was an invention by Ray Weiss at MIT but with the seeds of that idea coming earlier from Mikhail Gertsenshtein and Vladislav Pustovoit in Moscow, Russia. Ray Weiss invented this technique that we now use and it was different from Weber’s technique. We call it interferometer gravitational wave detection and It’s based on gravitational waves pushing mirrors back and forth. You measure most of the mirrors with laser beams.

Weiss invented this and then he analyzed all the major sources of noise that you would have to face and described how to deal with them. In 1972, he provided a blueprint for the way forward with this kind of design. It was a blueprint that got modified in various ways but not hugely. It was really a design that stood the test of time for decades as a guide for a way to do this. That was the biggest turning point.

It’s quite interesting because Ray is a modest guy and he had the idea that he shouldn’t publish this in the regular literature until he had discovered gravitational waves. So he wrote this paper that I think is the most powerful technical paper I’ve ever read. He wrote it and published it in an internal MIT report series. It was readily available to people like me who were interested in the subject. You had to go search for it because it wasn’t available in the regular literature.

Whats next for this field now that gravitational waves have been detected?

Soon we had all these different windows that all looked with electromagnetic waves but with different wavelengths. The universe looks very different through a radio telescope and an x-ray telescope than it does with light. The same thing is happening with gravitational wave astronomy.

Will gravitational waves be used to explore the universe?

That’s what we are doing now. We are doing it now at LIGO. We’ve announced the discovery of two colliding black holes. There will be more and we’ll see many other kinds of phenomenon but we’re only seeing them with gravitational waves that have a certain period of oscillation. A period of a few milliseconds. We will, within the next 20 years, see gravitation waves that have periods of hours.

With detectors similar to LIGO that fly in space, we will, probably in the next 5 years, see gravitational waves that span years using a technique from radio astronomy that involves the tracking of what we call Pulsars.

We will see probably within the next 5 years—surely the next 10 years, gravitational waves with periods almost as long as the age of the universe. Through patterns they make in the sky that we call the cosmic microwave background.

We’ll have four different gravitational wave windows open within the next 20 years and each of them will see something different. We’ll be probing the birth of the universe with this. The so-called ‘inflationary era’ of the universe. We’ll be probing the birth of the fundamental forces and how they came into being. We’ll watch them be born in the earliest moments of the universe using gravitational waves. We will watch black holes collide which we are now doing but huge black holes collide. We’ll  watch stars be torn apart by black holes.

We will see just a fantastic range of things that we’ve never seen before and this will go on for centuries as optical astronomy has gone on for centuries. This is just the beginning.

You worked with Christopher Nolan and Paul Franklin to build the science and visuals behind Interstellar. How accurate was the black hole in the film, Gargantua?

It’s the most accurate representation that has appeared in a hollywood movie. Oliver James, who is chief scientists at Paul Franklin’s company Double Negative, with some insistence from me invented a whole new way to do the imaging. It produces images that are more smooth and more accurate in that sense. That’s what you need for an IMAX movie.

We used a new set of techniques, but using an older set of techniques, astrophysicist have been building images like the image of Gargantua going back to 1980. It was first done by Jean-Pierre Luminet in France. Images of black holes that resemble Gargantua are there but you rarely saw them in astrophysics literature. This is not something astronomers actually see with their telescopes.

This is the highest resolution version, the most compelling version, and the most captivating version. But accurate depictions have been done by astrophysicists previously.

In the film, Professor Brand explains that by the time Cooper gets back from his interstellar journey, he would have “solved the problem of gravity.” What was that problem?

In the movie, the Earth is dying biologically and there are only a few million people left.The quest of Professor Brand and the people working with him is to find out if it’s possible to lift those remaining people off the Earth in space colonies. They didn’t have the rocket power to do that. They had the power to build space colonies on Earth but didn’t have the rocket power to lift them off.

In the movie, there are gravitational anomalies that have occurred quite suddenly and this weirdness about gravity that has started occurring suggested to Professor Brand that it might be possible to control gravity or change its behavior.

How far is humanity from interstellar travel?

I think we likely will but not in less than about three centuries. It’s very very difficult.

There are ideas for how you might do it, generally involving putting people in space colonies that last for generations. There are propulsion ideas that people have had that make me think it will be achieved by human beings in three of four centuries.

Read our interview with the Oscar-winning visual effects artist behind Interstellar, Paul Franklin. 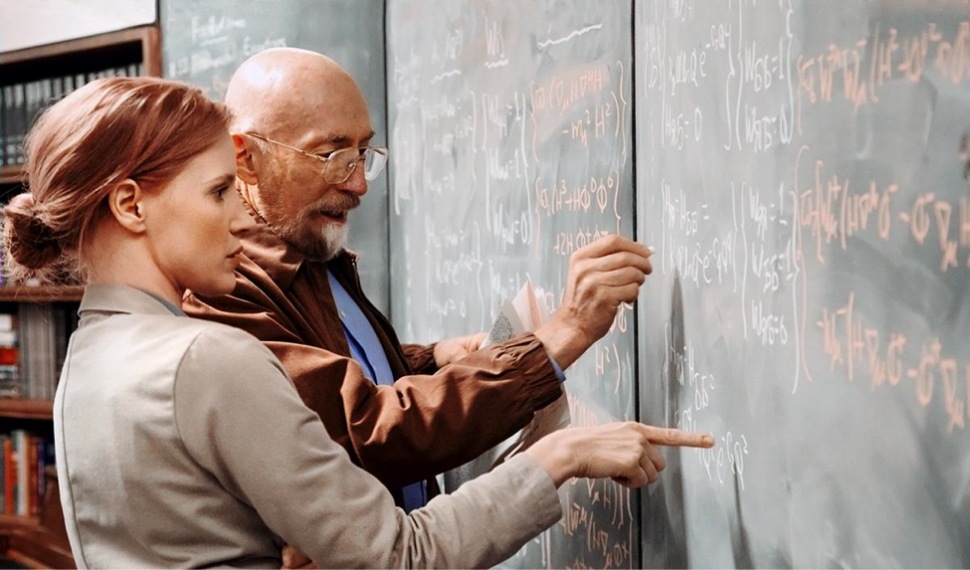