It’s Tuesday in New Jersey, where Gov. Chris Christie’s compromise Supreme Court pick advances, New Jersey voters let their feelings about Donald Trump be known and we look at some of the top municipal officials in the state.

Quote of the Day: ““If that’s what he was going to do to make it onto the Supreme Court, I really have difficulty with what kind of Supreme Court justice he is going to be,” – Senator Loretta Weinberg, expressing her reservations about Walter Timpone

15 of the Most Influential Municipal Officials in NJ
Usually, when one thinks of powerful elected officials in New Jersey, high-ranking figureheads like the governor or congresspeople spring to mind. However, municipal officials like mayors and councilmembers far outnumber statewide legislators. For some, those municipal roles have created a real sphere of strength and influence that reaches far beyond their city’s borders.
Alyana Alfaro, PolitickerNJ Read more

Rutgers-Eagleton Poll: NJ Voters Fearful of, Angry at Trump
Donald Trump may be the GOP frontrunner in New Jersey, but the real estate mogul provokes some strong negative reactions from many registered voters in the Garden State, according to the latest Rutgers-Eagleton Poll.
Politicker Staff, PolitickerNJ Read more

Weinberg: Timpone ‘Coming On Under a Cloud’
Following the state Senate’s vote to confirm ELEC commissioner Walter Timpone as the state’s newest Supreme Court justice, one Bergen Democrat is calling the centrist Democrat ethically compromised for his involvement in an investigation into Essex County Executive Joe DiVincenzo. Saying that Timpone “disrespectfully” failed to respond to her inquiries about his self-recusal in that investigation, Majority Leader Loretta Weinberg (D-37) said Timpone will be “coming on under a cloud.”
JT Aregood, PolitickerNJ Read more

Suleiman Positions Himself to Succeed Schroeder as Atlantic County Dems Chair
Today, Michael Suleiman announced his candidacy for Chair of the Atlantic County Democratic Committee. Suleiman hopes to succeed current Chairman Jim Schroeder, who announced he would not be seeking another term after many years of dedicated service.
Max Pizarro, PolitickerNJ Read more

With May Election Near, Teaneck Struggles to Cope With Mayor’s Death
The flags in Teaneck are flying at half-staff today as the town attempts to cope with the untimely and sudden passing of Mayor Lizette Parker, lost this weekend to respiratory issues at age 44.
Alyana Alfaro, PolitickerNJ Read more

Does Diehl Have Another Trick up His Sleeve in LD18?
Close to the developing action in volatile LD18, a source told PolitickerNJ that local Democratic Chairman Keith Hahn continues to have discussions with the political people around Mayor Tom Lankey about the vacant assembly seat.
Max Pizarro, PolitickerNJ Read more

Prieto, Sweeney Come Out for Striking Verizon Workers
As union striking Verizon workers rallied outside the State House today, the state’s top Democratic lawmakers voiced their support for the workers and their demands. Organizers from the IBEW, CWA and AFL-CIO demonstrated against Verizon’s offshoring of more than 5,000 positions, and its increasing outsourcing of low-wage work to non-union contractors.
JT Aregood, PolitickerNJ Read more

Ruling Goes in Favor of DiVincenzo in Longstanding ELEC Case
A judge today issued a ruling against the state Election Law Enforcement Commission (ELEC) and in favor of Essex County Executive Joseph DiVincenzo, a ruling that appears to stem the case ELEC brought against DiVIncenzo for using campaign funds to take a trip to Puerto Rico.
Max Pizarro, PolitickerNJ Read more

No plans for Stop Trump collusion in New Jersey
While Donald Trump’s rivals are plotting elsewhere to thwart the GOP front-runner’s claim to the Republican presidential nomination, they haven’t agreed to deploy the controversial coordinated effort in New Jersey, where Trump is the heavy favorite.
Bob Jordan, Asbury Park Press Read more

Funeral to be held Saturday for Teaneck mayor
Arrangements have been scheduled for the township’s mayor, Lizette Parker, who died Sunday.
Mary Diduch, The Record Read more

Rutgers announces ticket details for Obama graduation ceremony
The complicated logistics of hosting a sitting President as commencement speaker are unfolding at Rutgers University – as the school works to accommodate an “unprecedented” number of requests for nearly 50,000 available seats.
Patricia Alex, The Record Read more

Menendez, Booker join opposition to Hudson River commerical buoy plan
The parade of public officials to come out against a potential mooring buoy for commercial barges in the Hudson River got a bit longer today.
Patrick Villanova, The Jersey Journal Read more

Will DiVincenzo campaign spending charges be dropped?
The state’s appellate court today refused to allow a long-stalled campaign finance investigation against Essex County Executive Joseph DiVincenzo to continue, which could lead to the dismissal of all charges against the powerful Democrat.
Ted Sherman, NJ.com Read more 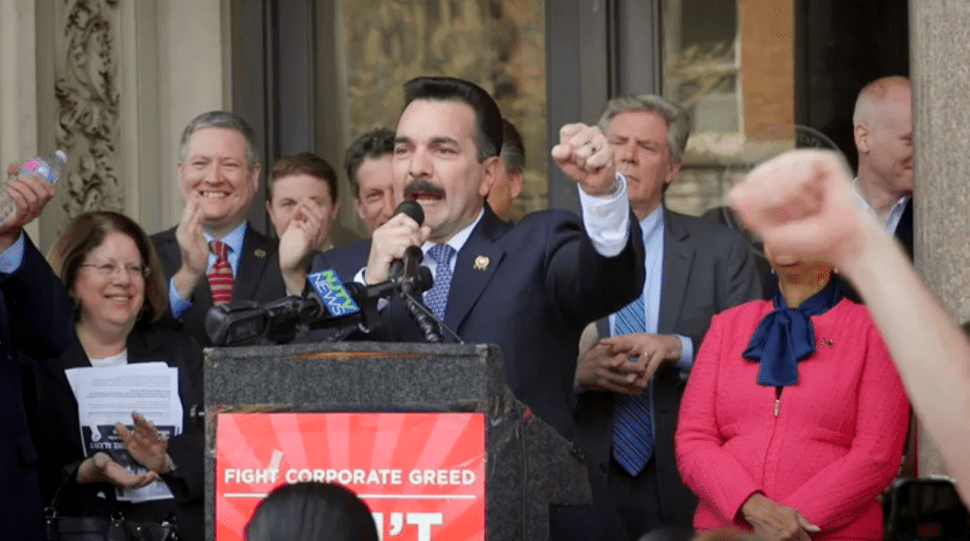