It’s Thursday, and the ongoing fight about Atlantic City and control of its finances and assets has apparently led to plotting in the corridors of power in Trenton and some harsh words from the bully pulpit. Meanwhile, at the other end of the state, lawmakers are calling on the governor to approve changes at the scandal-plagued Port Authority.

Quote of the Day: “Reforming the Port Authority is vital to bringing accountability to the scandal-plagued agency, and any true effort must include legislative oversight,” – Senator Bob Gordon, calling on Gov. Chris Christie to sign legislation for Port Authority reforms.

Weinberg : Ousting Prieto Not Answer to Legislative Disagreements
Powerful South Jersey Democratic boss George Norcross approached Bergen County Democratic Chairman Lou Stellato week regarding the possibility of removing Assembly Speaker Vincent Prieto from his position and possibly replacing him with Assemblywoman Valerie Vanieri Huttle (D-37), according to a report on NorthJersey.com. When asked about that move, Senate Majority Leader Loretta Weinberg, Huttle’s district-mate, said she did not believe it was the place of those outside of the assembly to try to reorganize the leadership in that house.
Alyana Alfaro, PolitickerNJ Read more

In Norcross Country, Christie Makes His Case for A.C. Takeover
As the Assembly and Senate continue their stalemate over a state takeover Atlantic City, South Jersey’s most powerful unelected figure reportedly weighed in this week. Following reports that insurance executive and Democratic boss George Norcross scoped out support for replacing Assembly Speaker Vince Prieto (D-32), Governor Christie made an appearance in Cherry Hill to reiterate his criticisms of Prieto and the Speaker’s takeover plan.
JT Aregood, PolitickerNJ Read more

NJ and NY Legislators Ask Christie to Sign Port Authority Bill
With the George Washington Bridge looming behind them, a bi-state group of legislators gathered to ask New Jersey Governor Chris Christie to approve the Port Authority reform bill that passed in the New Jersey legislature and went to his desk on April 7.
Alyana Alfaro, PolitickerNJ Read more

Sierchio: Morris Freeholder Board Wants ‘Puppet’ for Sheriff
Morris County Sheriff candidate Jim Gannon issued a statement on Tuesday blasting his opponent John Sierchio for having “his head-in-the-sand when it comes to very real threat from ISIS and the potential for a terrorist attack in Morris County.” According to Sierchio, Gannon’s statements about his stance on terrorism were issued in an “idiotic press release” that distorts facts.
Alyana Alfaro, PolitickerNJ Read more

Stripping Speech at NJ Rest Stops
When an Atlantic City “gentleman’s club” lost its right to place brochures in service plazas along New Jersey highways in December, the Federal Court effectively affirmed the right of a private vendor to control speech in some of New Jersey’s most public places.
Donald Scarinci, PolitickerNJ Read more

Democratic Leaders Work on ‘Tax Fairness’ plan
With Christie unenthusiastic about gas-tax hike and cuts to estate tax, lawmakers hope to make an end-run around the governor — and his veto.
John Reitmeyer, The Record Read more

N.J. senators confirm Superior Court judge just in time for him to collect full pension
Peter J. Barnes III, a Middlesex County Democrat, was confirmed by the Senate in a 34-0 vote and sworn in Monday, one day before his 60th birthday.
Salvador Rizzo, The Record Read more

N.J. comptroller: William Paterson, 2 other colleges owe students explanation of mandatory fees
New Jersey’s state colleges and universities have long saddled students with fees that have helped make the colleges among the costliest public schools in the country, and on Wednesday the state singled out three of them for not making it clear how the money was being spent.
Patricia Alex, The Record Read more

Political observers speculate about Mary Pat Christie’s reaction to Trump comment
Political observers said they were sure that Mary Pat Christie rolled her eyes Tuesday night as Donald Trump accused Hillary Clinton of playing the “woman’s card.” So on Wednesday, on Twitter and other social media outlets, all eyes were on the eyes of New Jersey’s first lady.
Abbott Koloff, The Record Read more

Campaign charges against DiVincenzo dropped on technicality
Time ran out Wednesday on the complaint filed by the state Election Law Enforcement Commission against Joseph DiVincenzo, closing the long-standing case charging the Essex County Executive with spending thousands of dollars of campaign funds on himself.
Ted Sherman, NJ.com Read more

No pay cuts for Atlantic City officials as they fight off bankruptcy
So much for that idea.
Atlantic City council President Marty Small said the council won’t consider a proposal for the mayor, council members and other city officials to take a 20 percent pay cut as state and local leaders grapple with how to save the Jersey Shore gambling resort from bankruptcy.
Brent Johnson, NJ.com Read more 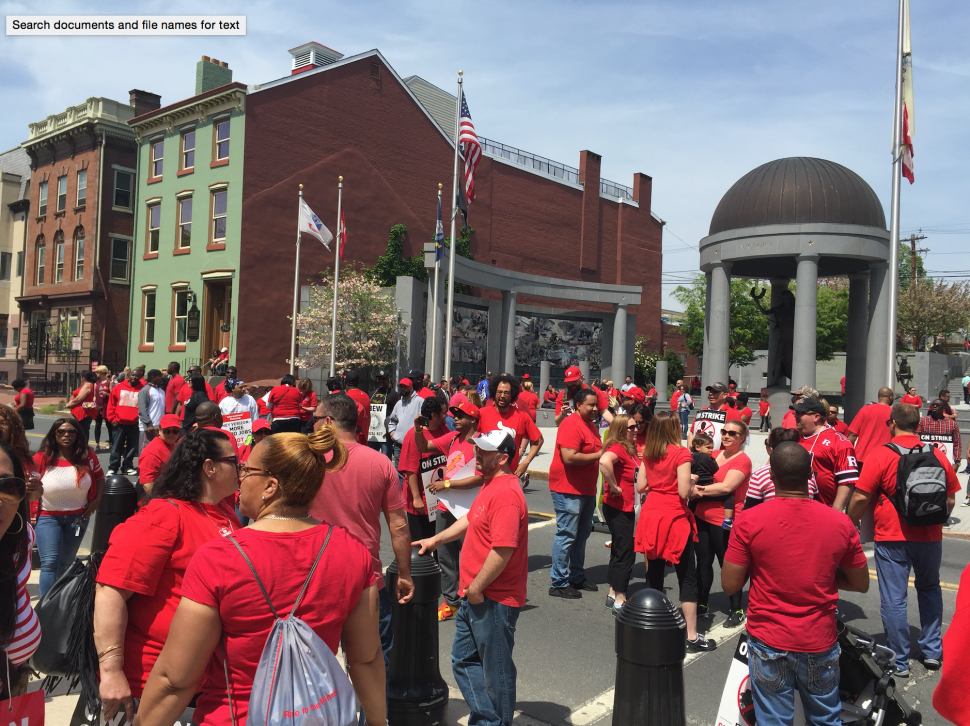