The past year, and especially the past several months as the marketing campaign got started, spent waiting for season 6 of Game of Thrones have been marked by a certain ambivalence for me.  Were all these people that I only sort-of knew dead or alive?  Even trying to avoid spoilers, I knew that Jon Snow was still showing up to set, and my friends had been very quick to correct me when I said I was surprised they killed off Sansa and Reek at the end of season 5.  Ultimately, I knew that I would watch the show – I loved it for a long time before I started to feel a little lukewarm, and if I could watch all 7 seasons of LOST on the strength of season 1 alone, I could probably turn out for ten more episodes of what is honestly still a very good show.

It’s that sense of inevitable probability that got to me, though.  I knew I would watch this show and even enjoy it, so why was I regarding it with such a sense of loss?  This sense that I wouldn’t enjoy it in the way that I had before.  In my practice as a therapist, it’s often these sorts of ‘loose’ feelings, the intuitions that seem to exist outside of the context of my relationship with a client, that act as a sort of key to what’s really going on.  This is what allows for the big swings in session, those moments where the client and I are able to drop the story and unlock the secret heart of the matter.

As to what this means for Game of Thrones, let’s start with what the episode is trying to tell us.  The title of this first episode is “The Red Woman,” and her brief and poignant story is emblematic of larger themes going on throughout Westeros.  This is a character who has lurked in the background of the show since the very beginning, having an outsize influence on the story for how much screen time she gets.  And even the time she does get in front of the camera has, until now, been in the service of others, or even the big Other – the Lord of Light.  This is the first chance we as viewers have had to see her interacting solely with herself.

Melisandre has two scenes in her eponymous episode, one right at the top and the other at the very end.  While her ending scene is the big stinger, don’t disregard the way we first meet her.  She stumbles in to Davos’ and Co.’s impromptu funeral/burgeoning counter-rebellion.  They are in the throes of sorrow at this sudden turn of events, and so is she; while they lament their dead friend, Melisandre mutters to herself that her visions in the fire have proven false.  She strokes Jon Snow’s face, but we know from her character that it’s not out of any kind of pity for him – her main interest is his blood – but rather for herself.

Of all the mourners in this room, she chooses the dead man to make contact with, because she herself has died.  While Davos and the crows are sad and scared, their lives are basically still in motion – the crows lives have always been at risk, Davos has made an onion knighthood out of spilling tears – whereas everything that motivated Melisandre over her apparently quite long life has suddenly left her high and dry.  It’s the difference between knowing you have to keep going to a job you hate and being fired from a job you love.  Both are extremely hard, but only one means you need to find a new boss.

This in many ways explains her final scene which, particularly in a show where the main character has to threaten to quit in order to not have her acting take second-fiddle to her breasts, was truly awesome.  This is the last scene of the episode, and it’s the kind of thing that makes you go back and re-watch the rest with new eyes.  The scene opens on Melisandre staring into her fire, an activity usually accompanied by prophetic visions, but now marked only by heat and loss.  The lord of light, her boss, her guiding purpose, her solace, has abandoned her.  Walking over to a mirror, she strips and regards herself.  Usually redolent in her own astonishing beauty and confidence, here she is forlorn.  This was her most-used tool in the service of her lord, what will it mean now?  Removing her pendant, we and she finally make contact with reality: a tired old woman whose body has been transformed and brutalized by a life of service in a brutal world.

It’s fitting that she does this before going to sleep, because, let’s be honest, that’s how people do this sort of self-reckoning.  This is a spiritual and psychological phenomena known as the Dark Night of the Soul.  This often comes at a time of critical transition, after a person has lost contact with whatever ground they thought they had to stand on.  Loss of faith, sudden divorce, the death of a child or simply slipping into a nihilistic mindset; these kinds of internal shifts are often marked by a night os reckoning.  This is an opportunity, usually unwanted, to come to terms with your flaws and pain, to square your fantasies about who you are and what you can expect from life with the realities of limitation and mortality.  In the big picture, this is great, and often paradoxically frees us to pursue our true heart’s desires.  In the short term, in the span of that night, it’s about as terrifying and intensely painful as passing a stone, except instead of some calcium moving through your p’zone it’s annihilation moving through your ego.

Of course it’s fitting that, as ever, she is paired with Davos.  It’s no coincidence he’s known as the Onion Knight – his tears and his victories always coincide.  Whereas Melisandre is on a path of extreme power to extreme vulnerability, ol’ Davos seems absolutely unfazed by his losses.  Which of course isn’t true, he may be the only character in the show we can say is definitely not a monster.  But it highlights the kind of wisdom he has displayed all throughout his tenure as Hand to Stannis Baratheon – the ocean will toss you about, so you might as well keep your ship steady.  In therapeutic terms, we would say he has resigned himself to working from his locus of control, i.e. himself, and doesn’t expect the world to do him too many favors.

Which explains my intuitive sense of ambivalence regarding this season.  Considering all that has happened to this cast of characters we’ve grown to know and care for, the best we can say about season 6 of Game of Thrones, regardless of quality, is that we’ll bear it.  Life is hard to stomach, that’s why we watch TV.  Life is also incredible, it’s where I keep all my stuff.  But for every joy, and there are many, there will be a sorrow.  For every time we see Rob Stark’s storyline end in a satisfyingly abrupt orgy of violence, we lose a Hound to a festering gut wound.  What Melisandre is learning and Davos knows is that these sorrows, painful as they may be, will never kill us.  But they will mark us.  And with some effort and bravery, we can learn to bear those marks proudly. 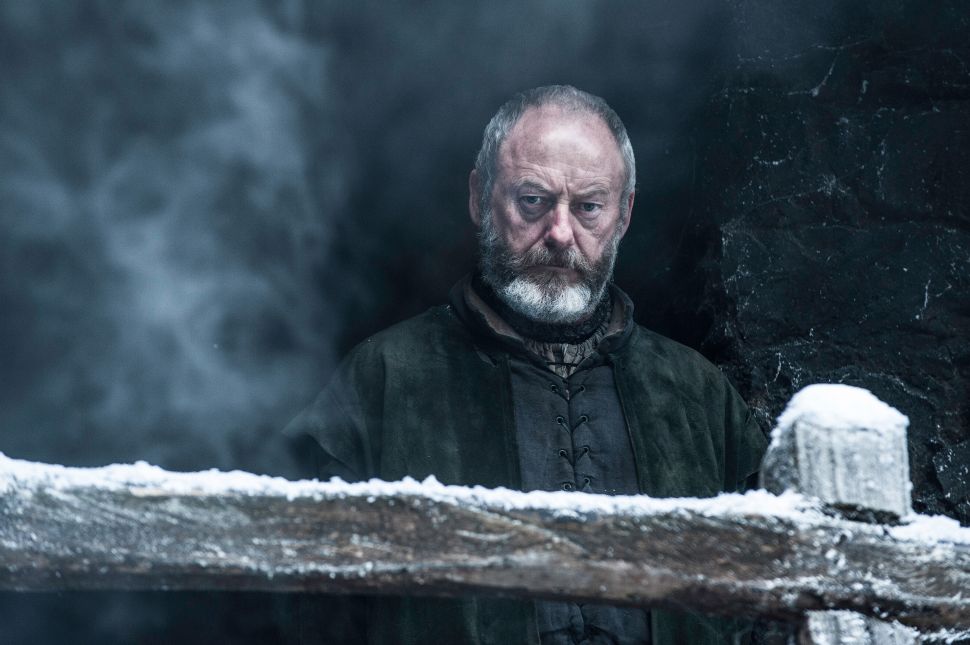