Look out, mayors and governors: After toppling both Assembly Speaker Sheldon Silver and Senate Leader Dean Skelos with public corruption last year, U.S. Attorney Preet Bharara said tonight he has his eye on the executive branch, too.

“We will keep looking hard at corruption in our legislative branch, as we have been. But not just there: in the executive branch too, both in city and in state government,” Mr. Bharara said tonight. “Executive offices in government are far from immune from a creeping show-me-the-money culture that has been pervading New York for some time now.”

Those comments come at an interesting time: Politico New York reported today that Mr. Bharara’s office is investigating the controversial removal of a deed restriction on a former nursing home by Mayor Bill de Blasio’s administration. Last week, CBS reported Mr. Bharara’s office was looking into the mayor’s campaign donations in connection with a probe into two businessmen accused of trading gifts for favors from police brass. On the state level, he’s reportedly sniffing around Gov. Andrew Cuomo’s economic development spending in Buffalo.

Mr. Bharara did not mention any of those reported investigations. But the prosecutor harkened back to his famous advice for people to “stay tuned” for future public corruption investigations—and said he wished politicians would do the same.

Mr. Bharara did not name-check any executive branch members, but did implicitly refer to one: Gov. Andrew Cuomo, whose decision to shutter the corruption-busting Moreland Commission Mr. Bharara has criticized—and investigated, though he eventually announced he’d found nothing criminal in its closure.

“I’m staying tuned, I’ve checked the local listings and sadly I don’t see any of this new programming,” Mr. Bharara said of his hopes for politicians to police themselves. “Instead, what we’ve gotten is a lot of reruns and, dare I say it, premature cancellations.”

The audience murmured in disapproval. Mr. Bharara, ever personable, waited a beat.

“Yes, that’s a reference to the Moreland Commission,” he said, continuing his television metaphor, “which didn’t run for even one full season.” 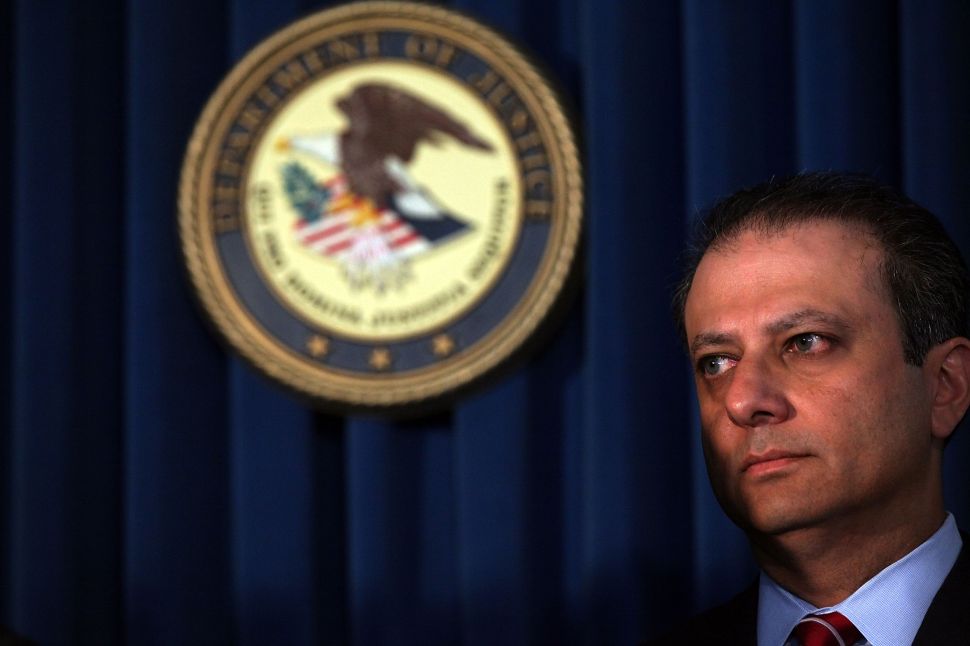