The New York State Republican Party hosted real estate mogul Donald Trump tonight at its annual gala at the Grand Hyatt Hotel—and a few thousand protesters were ready for him outside.

The multiracial demonstration seemed a convergence of several parallel left-wing movements: Vermont Sen. Bernie Sanders‘ campaign, the “Fight for $15” push to raise the minimum wage and Black Lives Matter activism against police killings. Many of the protesters wore shirts, stickers and pins for the insurgent socialist presidential candidate, while others repeated chants and slogans about “McJobs” and the “racist” NYPD. A large contingent of advocates who had been agitating against the fast food industry in Times Square joined the commotion about an hour after it began.

But the unifying theme was anger and abhorrence toward the anti-immigration billionaire.

The Queens-born candidate’s proposals to construct a massive barrier along the Mexican border, to round up and deport 11 million undocumented foreign nationals and to declare a temporary moratorium on Muslim immigration seemed to arouse the greatest outrage from the crowd.

“I feel it’s hypocritical for him to say that he wants to build a wall and kick immigrants out, when this country was built by immigrants,” said Hector Romero, an Argentinian immigrant and volunteer with the Sanders campaign who added that his family lacked proper paperwork during their first years in the United States. “If they don’t stand up and fight against what’s wrong it’s never going to happen.”

Others wanted to make Mr. Trump feel unwelcome in his hometown as he campaigns here ahead of New York’s April 19 primary.

“His vitriol is completely anti-American. There’s no space for him in this discourse and this dialogue and we reject all his values,” said Ali Najmi, a co-founder of the Muslim Democratic Club of New York, one of the groups that helped organize the protest. “I invite Donald Trump to come back home to Queens, where he’s from, and hang out there with the local community that’s very diverse and has a lot of issues with his statements.”

Inside the hotel, about a dozen protesters emerged from an elevator and into a mezzanine hallway where members of the press were waiting to go through Secret Service security screening.

“I do it for my people!” they chanted, shouting out various groups on whose behalf they protested, including African-Americans and Muslims.

The group, carrying a long banner that read “NYC Rejects the Party of Hate,” worked their way through the press crowd as a lone gala staffer tried to shoo them away. A few minutes later, several uniformed NYPD officers streamed through the hallway, plastic handcuffs handily attached to their belts, and headed for the protesters.

According to a press release sent out on behalf the protesters, 11 of those in the hotel mezzanine were arrested. Speaking to the Republican gathering several hours later, Mr. Trump questioned the authenticity of the demonstrators.

“You take a look outside, these are paid protesters, folks,” the mogul claimed, noting that many carried glossy signs. “If they’re real protesters we want those signs made in the basement.”

In fact, many of the placards on display outdoors were clearly former cardboard boxes.

The action on 42nd Street remained fairly tame, though cops had to break up a skirmish between a lone Trump supporter and several demonstrators he had begun pushing and throwing pro-gun literature at. A small group broke off and shouted anti-Trump broadsides at commuters inside Grand Central Terminal, but rejoined their peers on the sidewalk with little incident.

On a dais at one end of the barricaded protest zone, speakers railed variously against Donald Trump, Israel, Hillary Clinton, capitalism, U.S. immigration law, the NYPD and even Mr. Sanders—though the last attacks drew boos from much of the crowd.

“How are you going to make America great again? Is it by buildings? Is it by discriminating against women?” said Hortencia Petersen, the aunt of Akai Gurley, an unarmed black Brooklyn man killed the stairwell of the public housing development he lived in by NYPD Officer Peter Liang in 2014. “White supremacy is not acceptable in New York City.” 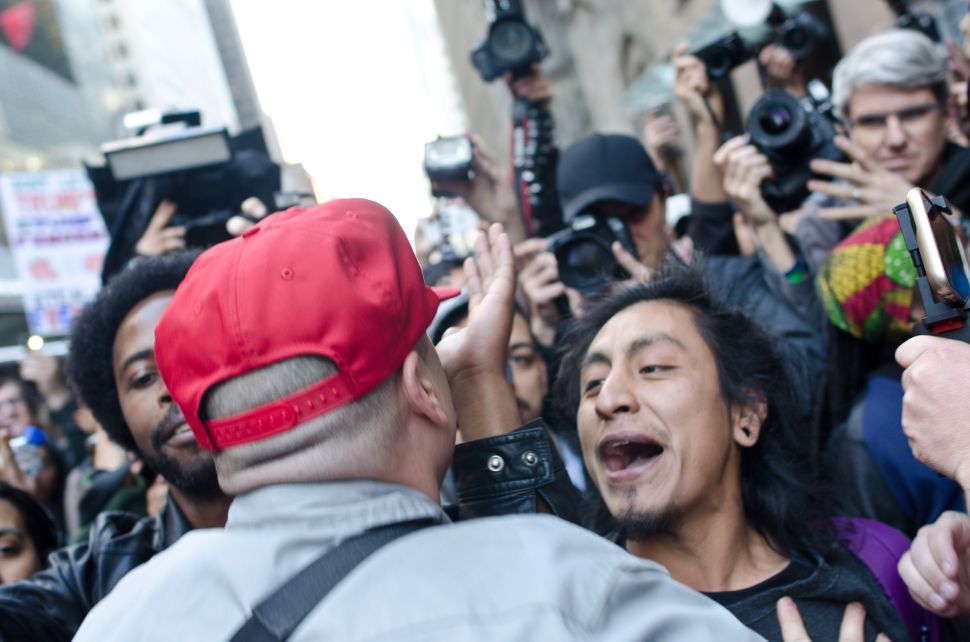