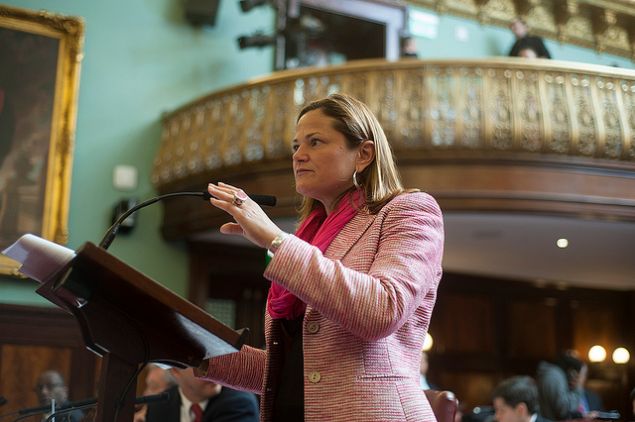 Council Speaker Melissa Mark-Viverito bashed a GOP proposal to create an oversight panel to micromanage her native Puerto Rico’s government affairs in exchange for restructuring some of the territory’s $72 billion in public debts.

Ms. Mark-Viverito, who still holds stakes in substantial properties on the island, lashed out at the House Natural Resources Committee’s recommendation to create a control board for the island modeled on the one that took over the municipal operations of Washington, D.C. in 1995. The legislation, drafted by Republican Utah Congressman Rob Bishop, would have the president appoint a five members to the body, four of whom would come from lists provided by the speaker of the House and Senate majority leader.

Only one member would have to reside on the island.

“The recommendation from Congress is actually an insult,” she said at an unrelated press conference at City Hall. “In its current form, it would basically be a fiscal control board that would usurp any sort of local governance, and decision-making. That’s horrible, obviously, for many many reasons, very insulting.”

The board, like the one that rectified D.C.’s finances, would have veto power over Puerto Rico’s budgets, laws and contracts for five years.  Mr. Bishop’s bill would deny longstanding liberal calls for allowing the commonwealth’s heavily mortgaged cities and public authorities to declare bankruptcy—a power granted to state municipalities, but not to those in territories like Puerto Rico.

But it would allow the island, with the control board’s guidance, to enter some bankruptcy-like proceedings with its bondholders.

Many advocates blame federal policy, which curtails the island’s trade, inhibits its ability to collect taxes and limits its aid from Washington, for the debt crisis. Puerto Rico Gov. Andrew Padilla, whose predecessors oversaw the issuing of most of the bonds, signed a moratorium on repayments yesterday, as the island faced $2 billion in repayments over the next two months.

He also slammed the Congressional proposal as an attack on Puerto Rico’s right to self-government.

“I think that’s a great rule. Obviously, the island is fighting back, and I think that, considering this lack of action at the federal level, we have to figure out other ways to address the issue,” she said.  “The government, the legislature, is putting the people first in this situation, and allowing for police to continue to do their jobs, nurses to be hired, services to be provided, to a population which unfortunately is facing a predatory crisis.”

The speaker, however, seemed somewhat open to the idea of a control board—if it incorporated some local representation.

“We definitely want to see a level of reform, or amendments or changes that would allow some, obviously, decision-making ability of the local government to be a part of that control board, if anything,” she said. “Some people have a complete issue and rejection of the control board, period. It’s a very, obviously, complicated conversation but what is there now is definitely unacceptable.”

Mr. Bishop’s office did not immediately respond to requests for comment.