When Dorinda was introduced to us last season, we met a woman who lives on the Upper East Side and looks like a Park Avenue Princess. A woman who is obscenely wealthy with extraordinarily bad taste. A woman with a bratty daughter – an overgrown millennial still slumming it in Mom’s house. A woman who was intelligent, who seemed calm and gentle; the perfect friend. But then we saw the woman who, after a few drinks slurs her words, is easily offended and is very, very, very loud. And that Dorinda, the Dorinda that emits Carmela Soprano vibes from the wrong side of the tracks, became a hidden source of drama. We only saw it briefly – once at a dinner in paradise where she goes off on Heather, another time at her house when she yells at Kristen for complaining about John’s behavior – but it added another dimension to her reality TV persona.

And so it’s no surprise that producers are taking advantage of Dorinda’s aggressive behavior. But it’s not Dorinda who is the focus of this episode. That title would go to her boyfriend, who was only briefly seen on this episode: the schmaltzy skeeve named John. You see, John keeps doing things that make these women not like him. And Dorinda, when she’s with him at parties, gets so wasted out of her mind that even Bethenny is concerned.

The issue of John came to a head at a bra party Dorinda decides to throw because she has managed to increase her cup size over the years. She realized that these women, like her, probably haven’t gotten fitted for a bra in years, and god knows that these perpetually stressed out women could use some internal support. So of course, that’s the perfect place for Bethenny to confront Dorinda about John.

Bethenny was bothered by Dorinda’s car salesman pitch promoting the greasy ball of fat known as John. Dorinda went on the defense, and it’s a hell of a defense: her hands flailed, her eyes bulged, and her voice rose a few decibel levels. She began to swear up a storm, bile rising, spittle flying, mouth foaming at Bethenny as she got up in her face. She even made a passive-aggressive pronouncement that she’ll just tell John to shut up and be careful when he’s around Bethenny, like a moody teen in a fight with her parents over curfew. If I didn’t know better, I would think I accidentally changed the channel to a re-run of Mob Wives.

But just as Dorinda got really heated, just as she was about to lay into Bethenny and skewer her for her “Godly” status as the Queen Housewife who believes she has the power to tell her colleagues what to do, Ramona piped in. She spoke softly, almost meekly, and said that if they’re all going to be “honest” here, she would take that opportunity to drop a bombshell as only the RamonaCoaster could.

Now, before this event, Ramona and Bethenny spoke on the phone about a scene that Ramona’s friend had witnessed. John apparently was at a party, went downstairs without Dorinda and started telling everyone present that he gets himself buzzed at night, takes Viagra and has sex with Dorinda for 6 hours. It’s a little TMI, a lot gross, and Ramona definitely needed to say something to Dorinda – but privately, off-camera, away from the other Housewives.

And so when Ramona decided that this was the perfect time to pipe in, I cringed. Dorinda who at this point seemed to have calmed down, gave Ramona a withering look as she sarcastically thanked Ramona for “jumping on the bandwagon.” Dorinda seemed genuinely shocked that Ramona would do this. Her shock was foreshadowed earlier in the episode when Bethenny said that whenever she gets close to Ramona, she gets burned and Dorinda responded that in 20 years that has never happened to her. But that was before Dorinda decided to join her on reality television. There is an unwritten rule that, on the path to reality fame and Housewife History, all bets are off. It doesn’t matter if you have been friends since the womb and you’re so close you can finish each other sentences. The moment you put your life in front of the camera, every fight you have is magnified and blown up to cartoonish proportions. It is then hashed-out, and re-hashed, and then re-hashed some more, all for public consumption and entertainment until that golden bliss that was once your friendship has become a dull amber, a pointed dagger, a constant, painful reminder of what once was.

Well, Dorinda’s calm was clearly before the storm. The situation turned even tenser as Dorinda’s decibel level increased exponentially. I had to turn the volume down because my dog was cowering from all the noise. This is the Dorinda we didn’t get to see enough of last season. Last season was her first season so she was on her best behavior. But with reality fame comes reality complacency, and with complacency comes the dreaded second-season “bitch edit.” Dorinda’s reaction (or, over-reaction) was so intense, poor Jules – in her naiveté as a newbie – kept looking awkwardly at the hidden producers, smiling in the uncomfortable, what-the-hell-did-I-get-myself-into, how-can-I-leave-this-party-early, get-me-out-of-here way that all normal people would feel in that situation. Except people like Carole, who have been through this rodeo one time too many. She just chucked back a swig of her martini.

The fight was so dramatic, it almost eclipsed the other conflicts and the battle lines being drawn in the sand during the rest of the episode. The show seems to be building toward a Luann and Sonja vs. Bethenny and Carole conflict. Luann has trashed Carole on social media because of her relationship with Adam – the vaguely hipster-looking chef who Luann deemed un-datable because of his prior relationship with her niece. It’s a petty grievance, but it has destroyed what little relationship Luann had with Carole. And Bethenny, while not exactly having an issue with Luann, doesn’t feel entirely comfortable with her either. Bethenny believes that Lulu is more “frantic”, more “shady” than normal.

It’s also odd that it’s already the second episode and Sonja and Luann haven’t gotten together with any of the other cast members. All we’ve gotten are extended scenes in Sonja’s grand townhouse. Like on this episode, Luann and Sonja, against a backdrop of peeling floral wallpaper and faded grandeur, discuss how Luann may actually want to settle down and get married again.

Pffff, please. As if. If she marries, she loses her title and will no longer be the Countess. She’d sooner willingly be banished to some remote, no-name town in Nowheresville, U.S.A than give up that title. It’s just not going to happen, mark my words.

As a side note, that scene also informed us that Floozy Boozy Sonja has burns sage in her kitchen to ward off demons. Honey, the only demons that will come to haunt you is your love of pinot, promiscuity and partying. The sage isn’t going to fix that.

As for Jules, I take issue with this insistence that Jules is too thin. Perhaps the resolution on my television isn’t that great, but Jules doesn’t seem to be any thinner than Bethenny or Carole, both of whom have commented on how thin Jules is. It may be just me, but there seems to be a lot of deflection here, as both Bethenny and Carole have been accused of having an eating disorder. So perhaps it isn’t very surprising that the other two very thin, very tiny women on this show are the only ones who seem to be concerned with Jules’s weight. I mean, Carole is so thin, her black leather hotpants were basically falling off her all night at Dorinda’s bra party.

It’s obvious they (or the producers) are trying to establish an issue that will be explored later on in the season. But there’s no need to go there. Jules is a hot mess as it is. She bribes her kids to get them to behave and she’s got some crazy in her: she’s so kosher that, upon realizing she mistakenly touched shrimp, she needs immediate ritual purification and so proceeds to find the closest mikvah, or ritual bath. Apparently, her idea of a ritual bath includes dousing the impure hands in question in lemon juice and then soaking them in an ice bowl. Most people who keep kosher simply don’t eat shellfish. But Jules takes kosher to the next level – she can’t even touch it. I’m starting to get annoyed that she keeps saying “I’m Kosher” when she really means she “keeps” kosher. The former is a state of being, the latter is an observance of something. It’s semantics, but there is a difference.

Next week’s episode looks like a doozy: the bra party fight continues as a clearly inebriated John stops by and confronts Bethenny about allegedly stealing “Skinny Cow’s” brand name by calling her own company “Skinny Girl.” And you don’t mess with Bethenny about the company she built brick-by-brick with her blood, sweat, and tears. Not if you want to come out the other side with your pride intact. 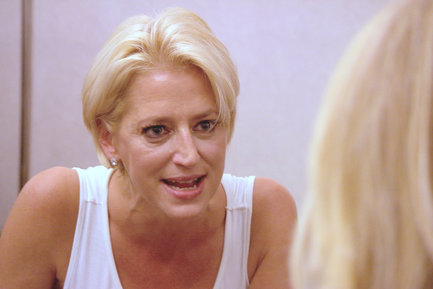