Like all good reality TV fights, one episode is not enough for ratings-hungry producers. It’s why Housewife reunions, which used to be a one episode rehash sesh, has become a three-part extravaganza, topped off with a “Secrets Revealed” (where nothing ever gets revealed) season finisher. Fights are glorified, with every commercial for an upcoming episode highlighting the drama to come in the days ahead. And so we begin this episode right where we ended last week: Dorinda has just yelled at Bethenny and Ramona and stepped outside to cool off. We find Dorinda outside, shaking in silent rage as she lifts a joint to her lips, manically puffing rings of smoke. Jules has joined her, like a lost puppy who doesn’t know where to be, because she has no place or purpose in this conflict.

Ramona, reeling from Dorinda’s angry outburst, looked properly chastised. For once, Ramona seems to regret saying what she said when she said it. If even Ramona feels she did something wrong, then you know she actually did something wrong. This is the woman who never apologizes for anything, who laughs off her obnoxious behavior and expects her colleagues to join her in sweeping it under the rug. This is the woman who threw a glass at Kristen, injuring her eye, and barely affecting an apologetic disposition. This is the woman who viciously told Bethenny, during a stroll across the Brooklyn Bridge, that Jason (her now-ex) would probably leave her. But this Ramona, this nervous, anxious Ramona, who needs to rehearse her lines so she says the right thing to make this whole situation better – this is a Ramona that rarely graces us with her presence, who appears so seldom that when she does appear, the heavens part, angels sing and a pot of gold is discovered at the end of the rainbow.

Her apology was awkward, stilted; as if she couldn’t even believe that she was going against the unapologetic Ramonacoaster reality persona she so carefully cultivated. She walked in, almost vomited the apology and quickly walked away – ashamed of herself, no doubt, that she had to break character.

At this point, the party was almost over, and the guests started to trickle out, leaving Dorinda, Bethenny and Jules sitting back on the couch where this whole fight started. Suddenly, Dorinda’s phone rang and, as reality television protocol dictates, she put the phone on speaker. It was her boyfriend, Slimy Johnny. Forgoing all pleasantries, he went right into it: “Any bitch that talks smack…” which prompted Dorinda to ignore all reality TV rules and turn off speaker to make the conversation private.

And then the intrigue begins – who told Slimy Johnny about the fight? It was inevitable that he would find out, but so soon? Is he psychic? Sonja’s new Swami? Was it the bra fitters who spilled the tea? One of Dorinda’s so-called friends that she invited to the party in addition to this crew? A producer? Was it Colonel Mustard in the ballroom with the candlestick? Whodunit??

But it seems as if the mole won’t be found on this edition of drama. Instead, we get a swaggering Slimy Johnny, stalking into the room with his skinny striped scarf slung insouciantly over his shoulder, like a cocky Jean Paul Gaultier model on the runway. He appeared to be on something – perhaps the Viagra he claims to use before having sex with Dorinda? But I would hazard to guess that whatever he was on maybe a little more than mere Viagra. Maybe coke, as Bethenny alluded to as she started in on him. Whatever it was, it made him so wound up he was ready for a fight.

And what a fight it was. For me, it was interesting to see how this fight played into the dynamics of his relationship with Dorinda. When he first came in and sat down, he put his arm around Dorinda, nudged her and said, “Hi, I’m here” – like someone who is needy for her attention. He then went on the condescension train, asking how her “little” bra party went, asking “is everyone behaving tonight?” He seems like the kind of guy who gets off on playing to his male bravado, who is a Beta trying to come off like he’s an Alpha. It’s obvious Dorinda is the boss in this relationship, and it makes him deeply insecure. He’s also very aware that she’s the prize, that she’s a few points higher on the attraction scale than him. And so, almost to make up for his loss of dominance, for his inability to charm Dorinda’s friends, he thrives on publicly ridiculing her, by making obnoxious jokes and flirting with her friends – all the terrible personality traits that these women dislike about him.

Dorinda, on the other hand, is a private person by nature. Yes, she is on a reality show, but she doesn’t enjoy putting certain parts of her private life under a microscope, especially the parts that people most often judge about her. She is a Type A Control Freak, a woman who wants people to follow the script she hands them, to adhere to the narrative she wants the world to see. It’s why she’s so defensive of Slimy Johnny, why she incessantly talks about his good traits to anyone who will listen.

As she tried to reason with Slimy Johnny to back off, to stop embarrassing her, her voice was lowered, almost meek. It was a stark contrast to the painful decibel levels she employed while yelling at the other women. The tone was deferential; she spoke in an undertone. But the words themselves were searing and harsh. It wasn’t yelling in the traditional sense, but in the way you silently yell at your spouse or sibling in public, giving them death eyes and kicking them under the table when you think they should shut up.

But let’s dive into the fight itself. Apparently, Slimy Johnny accused Bethenny of stealing, that she illegally derived inspiration from the name SkinnyCow, his friend Sam’s business name. But Bethenny, being a businesswoman, shut that shizz down like a boss. Slimy Johnny, after being stripped of his weapon that he worked so hard to sharpen on his way over to this party, threw down the gauntlet and went straight for the jugular: he started in on a personal attack. And what better way to stick a knife into the cold heart of Bethenny Frankel, who is going through the divorce from hell, by telling her she doesn’t know what love is and will never know true love, amirite?

Dorinda then kicked him out, but he kept trying to insert himself back into the situation. He, as Bethenny explained, vindicated her by showing his true colors on national television. She also, in a strange twist, became Dorinda’s shoulder to cry on as Dorinda emerged from the battle broken and wounded. She ended the evening standing on the precipice, not knowing whether she will ever be friends with Ramona or Bethenny, not knowing if, after the humiliation she suffered, she will still be with Slimy Johnny – that annoying blob of gum at the bottom of one’s shoe. She even obliquely references the fourth wall, indicating that she was seriously considering walking off the show. But the pull of reality television and, apparently, Slimy Johnny’s swarmy version of romance, was too great and she headed to the Hamptons for the weekend with the camera crew and a fidgety, sweaty Slimy Johnny to stay by Jules instead of Ramona.

Oh Jules, poor Jules. The woman who relies on Sour Patch Kids to calm her kvetching, crazy, crying kids. The woman who calls this spitfire pack of beautiful women “the elderly.” The woman whose spoken sentence structure is clumsy and crude, who, every time she opens her mouth, sounds like an idiot. This is Jules. And, even though her idiocy is supposed to come off comical, she isn’t really funny. She lacks so much self-awareness and so I find myself cringing every time she speaks, every time she voices her opinion, every time she tries to make a joke. Her presence on this show has so far underscored her irrelevance. And her irrelevance was on full display last night when, during the epic blowout between Slimy Johnny and Bethenny, she acted so awkward. She kept trying to insert herself into it – laughing at Bethenny’s snark, trying to get a word in edgewise, flapping her arms around – like an unpaid intern who walks around shuffling papers to appear productive. But she was useless here, like a tacked-on appendage stretching her long giraffe neck across the screen, silently begging for relevance. Her function at this point is to be Slimy Johnny’s cheerleader – not exactly the best position to be in as the newbie. Like Bethenny explained, “She is picking the wrong horse.”

To resolve their issues, the final scene had Dorinda and Bethenny and Ramona meeting for dinner in the Hamptons. They all dressed in varying shades of neutrals, to match the relaxed Hamptons vibe and to keep the tone in neutral territory. Dorinda, in a self-righteous rage, went into Ramona first, calling her “despicable” for what she did. Ramona could barely breathe as she tried to apologize profusely in between Dorinda’s jabs. But then, Bethenny cut in and demanded an apology for the way Slimy Johnny spoke to her. What was interesting was that Dorinda is so set on defending the indefensible that she at first refused to apologize. Like a true codependent or devoted disciple, Dorinda still religiously defended Slimy Johnny’s actions. Only once Bethenny detailed the facts and explained why she deserved an apology, did Dorinda snap out of it for a brief moment and apologized. It was then that the world began to become whole and relationships began to heal. Ramona and Dorinda shared an emotional moment, Bethenny made a snarky comment and they all laughed. It was a lovely end to an emotionally depleting episode.

But wait! Where was our favorite Floozy and our Classy Countess? They had a brief, if-you-blinked-you-missed-it, boring scene where they looked for an apartment for Lulu. They still have yet to engage the other cast members and, as a viewer, I’m beginning to question their relevance to the show. It’s as if Bravo deliberately inserts these inane scenes with the both of them to remind us that these two are still full-time Housewives. But things look up for the duo next week: the Countess and Princess Carole will finally get into it. Thank god because all this focus on Slimy Johnny is getting to be too, well, slimy and I’m ready for some royal sparring. 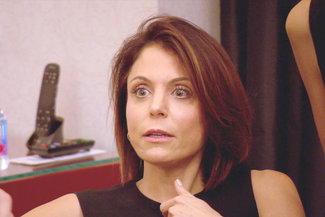