Life is all about contrasts, and the strings of similarities that tie it all together. Some people are rich, some are poor. Some people are good, some are evil. Some people are smart, some people are stupid. And it’s these contrasts that produce conflict, that create the problems and issues that complicate relationships. And on last night’s episode, we were presented with a boatful of contrasts and contradictions, of teams galvanizing and becoming increasingly polarized. This was an episode that presented two very different events in very different settings – one at Bethenny’s house and one at Jules’s – that were also uncomfortably similar in their awkwardness.

It all began with Bethenny’s birthday party. This party, hosted in her Bridgehampton home, wasn’t just any party; it was The Ultimate Awkward Party from Hell. But before we get into that, we have to talk about her house. Holy crap is her home all kinds of perfect. It’s small, but cozy, and it’s beautifully furnished. The home comes with wide expanses of rich, verdant grounds. There is a pool and perfectly pruned hedges along a long gravel walkway in the mode of a proper English garden. But there were abundant signs that this was a home filled with people who crave comfort: the swing set for Brynn, the bright red “Skinny Girl” Adirondack chairs, the backhouse bar decorated with neon signs, and the cutest rubber ducky sculpture in the front yard this side of the East End. This place, in short, is the perfect getaway home.

Anyway, Bethenny’s “tailgate chic” party took place on a perfectly crisp fall day, the kind of day for pumpkin patches and rolling around in fallen leaves and tossing around a football. It was the kind of day where you wear plaid shirts and cozy up under a cashmere blanket. There was a barbecue truck, bartenders, roaring fire pits to roast marshmallows and the cutest copper mugs that I’m seriously obsessed with and want in my home like right now. For me, they were totally the highlight of the party, and watching them glint and smolder in the sun, their hammered metal finish catching the light just so was very distracting. In any case, this is the formula for a perfect party, what could possibly go wrong?

But like all Housewife events in the most perfect venues, and all Housewife trips in the most perfect, exotic countries, this party was a complete bust. It was awkward. It was the kind of party that left you with permanent cringe-face, the kind where you wished your Moscow Mule had an extra shot of vodka. It was The Ultimate Awkward Party from Hell.

It began well. Carole arrived with her very large, shaggy dog known as Baby who then proceeded to roll around on the perfect lawn with Bethenny’s dog Cookie. Ramona came with her gay best friend and seemed relaxed. The other guests began streaming in and soon the party was in full swing.

Then Dorinda – flanked by Slimy Johnny and Jules and Jules’s husband with too much gel in his hair – arrived. They immediately pre-game it with some Moscow Mules served at the stand in the front yard. Once they made it out back, Bethenny greeted them all, but gave the cold shoulder to Slimy Johnny. Poor Slimy Johnny. As he stood there, off to the side, with his beady-eyed smirk, it was clear he felt uncomfortable, that he knew he was the pariah of the party.

But that didn’t stop Slimy Johnny from trying to corner Bethenny into a conversation. And her attempts to avoid him was comical. Someone spotted John approaching the picnic table Bethenny was sitting at, so Bethenny told Carole to huddle closer to her as if they were deep in a conversation that would be rude to interrupt. When he tried to sit next to her as she sat on a stone wall, it was as if he didn’t exist – she looked right through him and walked away. Even when he first arrived, she quickly changed the subject to “Let me get some drinks” as she scooted past him, like he was some obstacle she needed to avoid.

And if you thought that was awkward, it got much worse: Carole was also pretty hell-bent on avoiding Lulu. Countess Lulu strutted in to the party with a rabid nervous energy. She came clutching, of all things, a hula hoop. She walked up to the picnic table where both Carole and Bethenny were seated and said hello. Carole gave her the perfunctory kiss-greeting known in Housewife-land as the way you greet both friend and foe. And just when things couldn’t get weirder, Lulu hula-hooped in front of everyone. Carole was not amused. But Lulu was determined to talk to Carole, even though Carole was having none of it. Later, as Lulu tried to approach Carole and Carole began to walk away, Lulu cut to the chase and told her that she can’t avoid her forever. To which Carole responded, challenge accepted. This dance continued, until Carole, Dorinda and Bethenny gathered on the stone wall around the fire pit to roast marshmallows for smores. Lulu joined them and corned Carole, forcing her to have it out with Lulu.

Now, Lulu isn’t the kind of person who likes to humble herself. Having to admit she’s wrong is something foreign to her and groveling on the floor isn’t something her fragile, noble knees. could handle. So how does a gal like that handle her horrendous past behavior and gross misdeeds, especially when it’s obvious she was in the wrong and her nervousness indicates that she is well aware she was wrong? (getting eviscerated on social media will do that to an unrepentant narcissist) Well, by pretending it never happened and expressing your desire to move forward as opposed to rehashing it, of course! It is Lulu’s favorite way of reframing situations where she has erred egregiously so that she can turn the tables and make others, i.e. Carole, look bad if they refuse to make up.

But Carole didn’t fall into this trap. She knew exactly how Lulu wronged her and she was going to let her get away with it. She did exactly what Lulu didn’t want her to do, and went through all the terrible things she said about her, like how Carole is a pedophile for dating someone so young. Lulu shrank from this assault, but tried to salvage her position by saying that Carole said some pretty terrible things too. But, when asked, she could not recall a single thing Carole had said that was hurtful toward her. Because she didn’t. The only thing “hurtful” is Carole daring to date “The Help” — you know, those people too inferior to date nobility and by dating Carole, she brought him out of his servitude. Such an affront!

Bethenny didn’t fare much better. Ultimately, humanity won out and, seeing the pain and suffering her game of cat-and-mouse caused Dorinda, Bethenny decided to “eat crow” and face the beast head-on. So she pulled Slimy Johnny aside and, not surprisingly, that conversation went nowhere. It’s obvious Slimy Johnny was either too drunk to remember what he said, or just an unrepentant jackhole.

You know how people stutter when they are so wrong and don’t have a leg to stand on and yet are still trying to defend their actions by scrambling for reasons why the other party was also in the wrong? That was Slimy Johnny, whose orange Charlie Brown fleece sweater matched his red, swollen pancake face that, as his blood pressure visibly rose, threatened to swallow his already sunken, beady eyes. The conversation didn’t end well: Bethenny stalked off while Slimy Johnny stood there, copper mug in hand, taking a hearty swig of his Moscow Mule to wash away his misery.

But the party wasn’t a total bust. Ramona – who left both the Ramonacoaster and Crazy Eyed Turtle Time at home – was in full go-with-the-flow mode. She flitted between the warring groups, she was perfectly behaved, and she didn’t involve herself in any of the drama. In fact, she willingly escaped it; she had a date planned that night back in the city and left early.

And even though Slimy Johnny and Bethenny wasn’t able to make peace, the party ended on a good note. When Dorinda broke down after Bethenny’s conversation with Slimy Johnny, Bethenny felt so bad for her that she didn’t just lower her sword, she waved the white flag and declared that she was done fighting with him and wanted peace.

Jules’s place is beautiful, but it’s the kind of beauty that feels cold and clinical, the kind that consumes you with its emptiness. And its status as being under construction only emphasized its frigid indifference. This is a house, not a home. And this spare, unvarnished setting did nothing to squelch the awkwardness that carried over from the previous day’s party.

The Sunday “shmear” (seriously Jules, you need to stop. We get it. You’re Jewish. You don’t need to tell us 50 times an episode) was embarrassingly pathetic. Everyone sat around the kitchen island while only a few feet away, a construction crew noisily hammered away as an exasperated nanny desperately tried to keep the children from bothering the guests and the crew. Jules urged everyone to eat the mountains of bagels and babka while she studiously avoided carbs. No wonder Bethenny and Carole tried to make their escape, especially with the arrival of the Hula-Hopping Lulu. They got Jules’s too-much-gel-wearing husband to give them a mini tour, so they could make their getaway. Once outside, they ran to the car. They hopped in and sped away, like bandits after robbing a bank, or like kids who, after entering a haunted house out of curiosity and, upon discovering the horrors within, run away as fast as their little legs could carry them.

– Oh Dorinda, what an awful analogy: if you choose to invite Hitler to your home, you take that opportunity to murder him, not go out of your way to be nice to him.

– I’m getting really sad that my favorite Flossy Floozy Lady Sonja Morgan has barely been on the show and didn’t evejnmake an appearance this episode. The previews for next week show she’ll finally show up so I hope this episode’s absence isn’t a trend, especially because she’s supposed to be a full-time cast member.

– Those hammered copper mugs are everything. Seriously, where can I buy those? 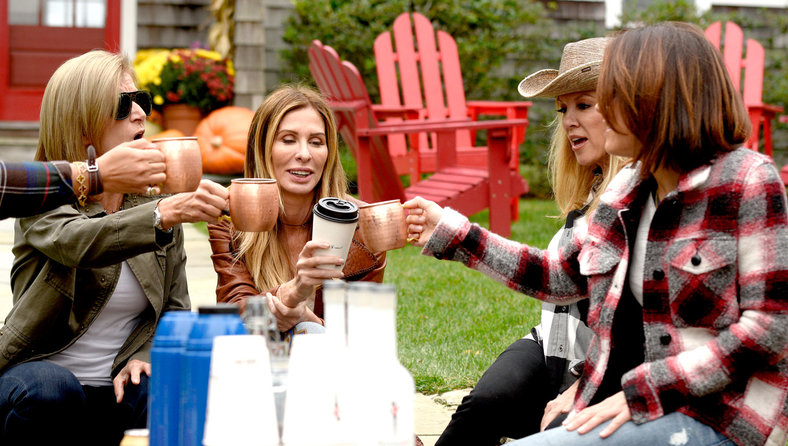