Here, the housewives aren’t clawing over one another (or trying to beat one another to a pulp) for their chance in the spotlight, they don’t end friendships over the inane issues. Every woman knows their role and is comfortable with it. The issues will, of course, be petty and more than a little dumb, but you get the sense that these women actually enjoy spending time together. It’s not like there is a cast member on the outs who needs producers to manufacture scenarios to start conflict and force the women to interact. Since the second half of last season, the drama in NYC has felt lighthearted, so we were finally able to focus on what’s great about this show: the real estate porn, the expensive clothes and vacations, the complete lack of self-awareness about their privilege.

The show this year did a bit of spring cleaning with their cast: Heather “Holla” Thomson and her paroxysm-induced grimace that was faker than a pageant girl’s smile and Kristen “Style-on-point” Taekman are gone; in their place is Jules. Jules Wainstein feels Kristen’s replacement: she is a “homemaker” with a live-in nanny and full-time housekeeper, has two young, obnoxiously tyrannical kids that walk all over her, and her husband Michael has all the trappings of the douchebag husband, with the heavily gelled, slicked backed hair most commonly found on Jersey Shore Juiceheads and short wealthy men (Michael, of course, belonging to the latter group). But, significantly, she’s not like Kristen in that she’s not a bland paper cutout. Jules is the non-Jewish looking, but really Jewish looking (to Bethenny), with Cher-like features (to Dorinda) Jew. Her religion is clearly important to her – she keeps Kosher even while dining in a treif restaurant known for their shellfish, and her slight New Yawka accent tinged with valley girl vocal fry hints at her JAP (Jewish American Princess) upbringing. Which is funny, because she also happens to be actually Japanese.

Speaking of ethnicity, this episode just kept talking about it. Maybe it’s because all these women are white, or maybe it’s because they feel that, despite their piles of money, they are actually quite basic, but even Class with the Countess deems it necessary to add to her growing resume of bonafides. Not only does she still have some random, meaningless French title (that she managed to retain even through her divorce) and an American Indian heritage, but she found out that she is also an Eskimo! I mean, imagine the igloo château she could commission and the Pucci-clothed sled dogs she would travel on as she waves to her Eskimo serfs. Sonja, whose Mom told her that her cheekbones were due to her American Indian DNA seemed disappointed that she was merely a pure-blooded English Welsh. Which was an odd statement because, if her mother actually made this claim, why is this the first we are hearing this?? Sonja has been on this show for almost as long as Lulu.

Lady Sonja Morgan is still a floozy, still lives in her Gray-Gardens townhouse, still has interns who, bewilderingly, get college credit for the honor of serving the Lady, and is still delusional – but, dare I say – more down-to-earth in her delusion? Of course, there were mentions of charity galas and galas in Paris, but our first glimpse of Sonja this season was of her on her balcony painting her furniture, seemingly unconcerned by her paint splattered hands as she spoke to Luann on-camera (who seems to be slumming it and staying with Sonja).

Because this is the first episode, the producers are laying down the foundations by foreshadowing the events to come (a whole montage of “on this season of RHONYC” gives us plenty of material to get viewers excited for the drama ahead). And Dorinda’s comment to Bethenny that she hasn’t had any alcohol all summer, with Bethenny immediately following up with, ‘um, I saw you drinking just a couple of weeks ago,’ seems to foreshadow more of the drunken, guttural, Mafioso-esque Dorinda who got to know last season as this season progresses. This conversation took place in Bethenny’s new apartment; which is, by the way, perfect: not too precious, yet not too cluttered and with minimal Skinny Girl paraphernalia (that’s reserved, appropriately, for her office at a different location). There is nothing new going on in Dorinda’s life: she’s still with the greasy dry cleaner (which happens to be the best dry cleaners around. Seriously. They even performed miracles and saved one of my favorite leather skirts which had stains that seemed impossible to fix, but I digress), but her bratty daughter is moving out so maybe the option of moving in together will be what finally breaks them up?

Cool Carole has become Mellow Carole. She has created a family with the young, hot chef – Adam – that last season caused Class-with-the-Countess to freak out and become even more Countessy and regress to Dictator of Etiquette because Adam happened to have dated her niece (she re-termed the “etiquette” and “class” of early RHONYC seasons with “girl code;” a possible sign of regression to unnecessarily complicated 10th grade social politics). She’s sworn off partying and clubbing in favor of motherhood, or, at least, some form of it. She has a dog named, possibly ironically, Baby, a puppy with the most enviable blonde perm.

Bethenny is still dealing with a crisis: she’s still going through the Longest Divorce Of All Time, has to pay her spiteful ex’s exorbitant electric bills, and she is having difficulty expanding her company as it becomes increasingly obvious she doesn’t have the same cultural cache as a Kardashian. But Bethenny is thankfully more like the Bethenny of old — snarky yet funny. Sweet yet rough around the edges. There is a lightness around her, the kind of relaxed aura you get when you’re truly happy. She seems accepting of the way her life is now. Such a change from the on-the-verge-of-tears, I’m-homeless-and-living-in-luxury-hotel-penthouses, center-of-the-drama we got last year. I’m hopeful she’ll be back as our favorite snarky Greek Chorus, the bearer of bon mots and witticisms to be repeated by fans like me in casual conversation.

Bethenny meets with the RamonaCoaster, and it seems as if Ramona’s “New Beginnings” party from last year paid off. She’s still the same narcissistic, self-centered, wannabe-teenager this group of women still inexplicably seem to love. But she’s got new boobs, new clothes and a whole new attitude. Like Bethenny, she has accepted her single status and is a woman on a prowl. But perhaps she has become a bit too accepting and too open. She goes to a bar with her newly-legal-aged daughter and gets all handsy and flirtatious with the man sitting next to her; all to get a free drink.

Luckily for Ramona, Avery is the sort of girl that spent an exhausting life tolerating things like that from her mother. And the look Avery gave her mom while she flirted at the bar was comedy GOLD. The eye-rolling and high-pitched whine certainly were an age-appropriate reaction to embarrassing parental behavior. But Avery, even as a precocious prepubescent, always seemed too mature for her age. And here, I half expected Avery to grab her Mom by the arm, maybe give her a good spanking, and ground her, forbidding Ramona from going out with men for the rest of her life.

The highlight of last night premiere was not the intro of Jewish Kristen Taekman, nor the fact that Sonja and Lulu are now roomies, nor Carole embracing her inner Martha Stewart, nor the increasing awkwardness of Dorinda’s relationship with John. No, the highlight last night was the lunch between Bethenny and Ramona.

Last season’s season finale cemented the importance of Bethenny’s and Ramona’s dynamic to this show. They have been, and are, awful to each other; exchanging barbs and backhanded compliments on the regular. But, as Bethenny told Ramona tonight, “What I like about you is that you allow for your balls to be busted.” Ramona may be in a perpetual state of midlife crisis, and she is the source of 2 Real Housewives classic tropes: Ramona Crazy Eyes and “Turtle Time,” but she, like Bethenny, can take as much as she can dish. Her scenes with Bethenny have always been the most enjoyable to watch because they are both stubborn, they both “own” what they do but suck at apologizing and, yet, they don’t take themselves seriously enough that their fights devolve into heated, emotional, all-out wars. It will be interesting to see if their lighthearted dynamic will help RHONYC avoid the boring, repetitive drama that has handicapped all the latest seasons of the other Housewife franchises. 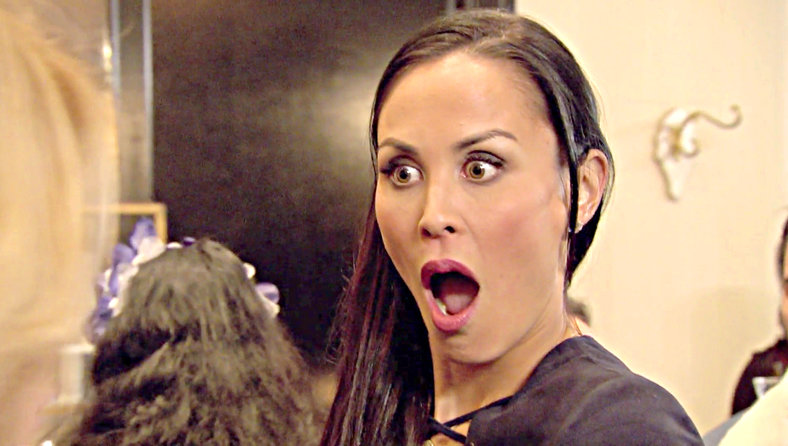