When we last left our seven new best friends, the house was giving Kailah a tough time because she had loud second episode sex with Dione. Jenna was particularly annoyed as she happened to be in the bed next to them. Kailah tells Jenna that nobody in the house likes her. And that’s where it left off. Pick up this week and Chris immediately tells Jenna “whoa whoa whoa” there are plenty of people in the house who like her. Womp womp, fight averted. Shout out to MTV Production who continues to cut promos like Ric Flair in his prime. This looked like it was going to be a big blowout but actually it was just Chris showing off his early morning / late night attire of the tiniest tiny little black underpants and nothing else but dangly hair jewelry.

The crux of this week is an examination of relationships, specifically Jenna and her at home “best friend, he’s not my boyfriend, but we’re together, we’re Mormon, I never said I was a perfect” dude, Austin. And then Kailah who clearly is feeling Dione after they hooked up even though Dione has a girl at home who isn’t his girlfriend but he calls her on the phone all the time and she’s coming to visit and is most definitely the jealous type.

Everybody in the house has an opinion about Jenna’s guy at home. According to her, he’s there for her in a way that nobody else in her family is and that’s valid. But the relationship gets complicated in the way all long distance couples feel tension—Australian male dancers. Yes, at this particular pool on this very day there are a group of oiled up, chiseled Aussies who take off their clothes while they dance. Jenna gets a poolside lap dance from Lightning Jack but then feels so guilty she tells Austin all about it. Austin’s response is “you do you but if I see things I don’t like then we’re not going to be together.” It’s a very common answer for the partner at the home of a roommate—there’s not much you can really say. I mean you could say “don’t hook up with anyone” but the thirty-one seasons of people thinking they’re going to get away with a clandestine hookup and totally eating it on camera is everyone. But Jenna didn’t hookup, she got a lap dance from a professional. That night, the house goes to the Australian Thunderdome to see these guys dance for Ceejai’s birthday. Jenna sits in the back of the club to show respect for her guy back home. But she sees a dancer she likes and Ceejai calls him over. He ends up taking her onstage and dancing all over her, including taking her hand and thrusting it down under. Jenna leaves the club crying, furious at Ceejai for enabling it.

Ceejai’s take is that Jenna could have said no and didn’t have to go onstage with the guy. But Jenna’s voiceover describes her in detail trying to get out of it and not being happy about anything that is happening to her. Her facial expression and body language also portray this, which makes the whole incident feel very wrong. Chris tries to cheer her up but in doing so basically tells her “she has a look that says take advantage of me…” and that she should run away screaming “no” if put in another uncomfortable position. Again, Jenna tells Austin about what happened which leads to him basically cutting off all communication with her. By the end of the episode, he still hasn’t responded to her calls or her hard to decipher emails. Jenna’s emails are more beautiful than art. One of which is basically “:( (sad face) iwhyyyyy please just call me just want to talk to you.” And then a second note that is just “Austin” like five times in caps. But he’s Ghost like Slimer. 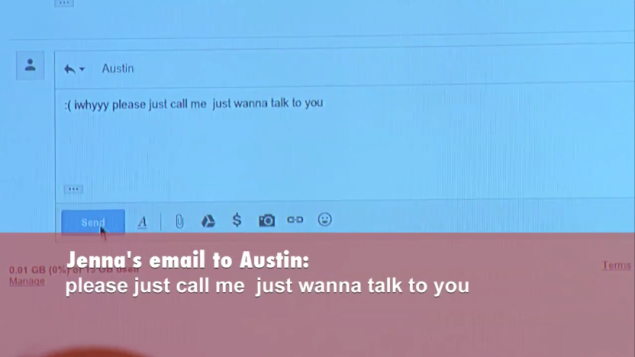 Kailah refuses to admit she likes Dione on some “I’ll hook up with him but like I don’t like him” tip that nobody believes. Dione decides that he’s done with Kailah, he’s no longer attracted to her, and he’s just going to ignore her forever. He figures his best decision is to be honest with his not-girl at home, Amanda (Please). Apparently, the one thing Amanda asked Dione not to do was have sex on the show—which isn’t really a lot of things to ask. But she seems to be more worried that Kailah is going to be in love with Dione now that she has had a taste of his carnieness because “you know how females are once they have intercourse.” Okay, so she’s not wrong because Kailah is into Dione. Like so into Dione that she’s talking to Ceejai about him from 2 feet away about getting naked and sneaking into his bed and he can clearly hear her but he’s doing that thing where you play so dumb about what is going on around you that you basically become a piece of furniture in that room like a credenza or a chifforobe and cease to be a breathing human being. But a woman who calls other women “females” is not someone to trifle with and Amanda (Please)’s reaction follows up with “I gotta watch you eff this b on tv? great” only without the curses shortened. She’s more mad Dione is going to be living with a girl who is now in sex-love with him than she is about him sleeping with someone else. In the meantime both Ceejai and Sabrina give Kailah the same advice (at two totally different times) to just strip naked and wait for Dione in his bed. She’d probably be better off waiting for him in his hammock (which has still not shown up yet…)

Ceejai’s birthday is tough for her because she misses her parents. She’s carrying a lot of guilt around about their deaths, which is completely understandable based on her situation. I don’t know how she deals with any of this, let alone on tv. She gets upset but her roommates are there for her. Dione, Dean, and Jenna even bake her a cake after not being able to buy one because they don’t sell cakes in Vegas that are smaller than the size of one a person jumps out of.

Since it is Ceejai’s birthday, the group gets to go ATVing. Jenna, who has been riding four wheelers since she was nine, wipes out off hers and it drives over her. She gets back on it and finishes the route. Ceejai also wipes out but lands on her feet. Except that a couple of days later, Jenna is in a lot of pain. She strained her neck and has to take it easy. The wrinkle here is that if they have a mission and she can’t take part, she might have to go. Guess what? They get a mission. Since Dean hates , it involves . With Jenna mad at Ceejai for the birthday stripper thing and Kailah for the bed sex thing, part of the house wants to see her go. Will she get kicked off? We have to wait until next week to find out. Because of that, almost nobody goes all that big this episode. Unless you count being on hover boards because they actually spend more time riding them than they do walking on feet, which I guess in some circles is kinda big. But not big enough to not go home. 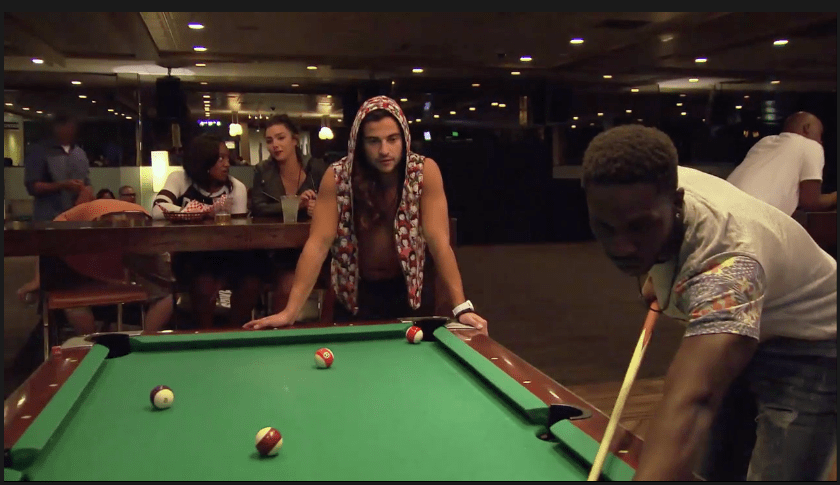