Previously on Go Big or Go Home, Jenna was in serious danger of not being able to go big and therefore having to go home. She hurt her neck ATVing and wasn’t able to compete in this challenge. After waiting the week in wild antici… that would drive Tim Curry to not ever do the Time Warp again, we discover that the Producers are going to let her roommates decide her fate. They immediately huddle up to discuss, which I thought was going to be a big joke like “haha made you think we had to think about it but of course you can stay you kooky Confederate flag worshiper,” but actually it sounded like Ceejai and Kailah would have really sent her home. They don’t, which will lead to major regrets from almost everyone by the end of the episode. But in the meantime, they all take part in The Blob, which is a big air cushion that you sit on while two people jump onto it from above, sending you flying into a Las Vegas lake that I can only assume is made up of gambling debt tears, dirty day old contact lens solution, and nightclub sweat. Dean is afraid of but he takes part in it. So does Sabrina, who has broken her collar bone not once but twice and has a metal plate in there now. Of course she eats it, summersaulting mid-air into a bellyflop and has to be dragged out of the by the paramedics. But she’s ultimately okay.

In the van back to their hotel, Dione badgers Jenna with Dione-questions like, “would you stay if you had to watch gay sex? What if you had to scissor someone?” Jenna mentions that the thought of gay people having sex disgusts her. This leads to an argument between her and Chris, who is pansexual. Jenna accuses Chris of worshipping Satan because he is an atheist and what atheism is really more than anything else is devil worship according to her. This is where mostly everyone begins to regret keeping Jenna around. The only ones not regretting it are Dione, who doesn’t seem to care about anything ever aside from his Mary Poppins bag of National Liquidators Halloween costumes and Dean, who thinks he can open Jenna’s mind by making the strong move on and smooching her into wokeness. Jenna thinks she’s being singled out because she has a dry sense of humor that is misunderstood as racism / homophobia because she is a Southern white girl. It doesn’t really help that her mom’s reaction to Jenna’s stories about the roommates involves her talking about taking off her earrings and “showing them all what a Redneck Southerner can do.” Jenna becomes a walking cliche dropping the “I don’t persecute gays one of my best friends is gay?” gem as well as the “I’m not offensive, if you’re offended it’s because you choose to be offended” jewel. Jenna’s best explanation to Ceejai about their differing views is that Ceejai can’t understand where she’s coming from because she wasn’t raised Southern. To which Ceejai answers perfectly “I’m from Atlanta, Georgia” which is the ultimate sit down Jen, you intolerant mother-effer. Part of the reason they kept Jenna was to try and open her mind but it seems to be backfiring and now tensions are high.

Last week, Chris was consoling Jenna throughout the whole episode but this week they did not get along. Jenna’s comments were a large part of that but Chris was also preoccupied by going to his very first real strip club. Line of the episode goes to Chris when he finds out that this is in fact a topless and bottomless club: “wait there’s vaginas!?!” Chris at the strip club is like that Red Hot Riding Hood Tex Avery cartoon except Chris doesn’t hold it together as well as that tongue-wagging, eyeball popping wolf. Chris looks like he is having and orgasm and a stroke simultaneously. Chris looks like Roger Rabbit when he drinks a shot whiskey. If Chris has any money left in his life after this it is a miracle because he was giggling and handing out dollars and going to get more like those ATMs don’t charge an $8.00 fee for every withdrawal.

Very strong performance from Chris this episode. Especially earlier on, when he’s walking around in his patented tiny black undies in and around the apartment. He goes outside to sunbathe and inexplicably pulls them down to suntan lotion up his junk. This is important later on, when the roommates realize that somebody got a photo of this and leaked the picture on the internet. Because in today’s society the internet is a sentient being that needs real time fuel or else it becomes angry and unruly. So people are already leaking items while the show is filming even though nobody knows anything about the people on the show because nothing has aired yet. Chris sees a pic of his own junk on a gossip website while in the house while the show is in production. Wild times. My head hurts. Well, Chris’s nude sunbathing isn’t the only thing to leak. The Real World gossip sites—a real, actual, not made up thing, are on fire because someone got a hold of some of the terrible remarks Jenna has made in the house. Even though the show is just filming and will not air for months. The truly interesting thing here is that everyone in the cast seems to be extremely aware of how Jenna being pegged as a racist could have a negative impact on the rest of her life. Which is valid and makes sense. But when matched up with the other things they choose to do on the show, you wouldn’t be crazy to think that they were completely oblivious about their actions having any real life implications.

Like Dione—the long-haired dingus (shoutout Sabrina for that one), for example. He knows this could be bad for Jenna. But he doesn’t act like there could be any repercussions for him sleeping with girls, dragging them on camera with no remorse, and then cutting them quick. Especially with a girlfriend / not-girlfriend at home, and a roommate he lives with that he’s already hooked up with. The Dione and Kailah relationship comes to a head when Dione brings Kia-like-the-car back from the Ghost Bar Day Club, which is the most Vegas sentence ever said, and has sex with her in the house shower. Of course, he flaunts it in Kailah’s face by making out with Kia and saying in the limo “I’m gonna plow her (Kia-like-the-car) on camera, and I hope you’re the cameraman” to the cameraman. Shout out to that cameraman, who just has to come to work every day to make a paycheck and ends up having to follow around Jungle Boy Swag’s shower sexcapades. Dione thinks he’s in the clear because he’s been straight up with Amanda and Kailah so WHAT COULD POSSIBLY GO WRONG HERE?!? He also murders the fourth wall in confessional by talking directly to Kia, like yes I had a good time with you, Kia, so thank you. Kailah calls him out on being in the shower for an hour with Kia to which Dione replies “I was a dirty boy.” Dione also flirts with the strippers from Chris’s big night out. Kailah wants to clear the air and Dione makes it clear that they hooked up and that’s it, he doesn’t want to do it again. The look on Kailah’s face is death to me, she’s trying to hold it together, trying not to lose it in front of this Joaquin Phoenix-Jack Black mutation. She even says she doesn’t know who she is anymore, which is a rough line.

The major mystery going into next week is who is responsible for the leaks? Could be anyone. My money is maybe on the cameraman, who just needed a little extra cheddar to sleep at night after all the things they had to see this week. 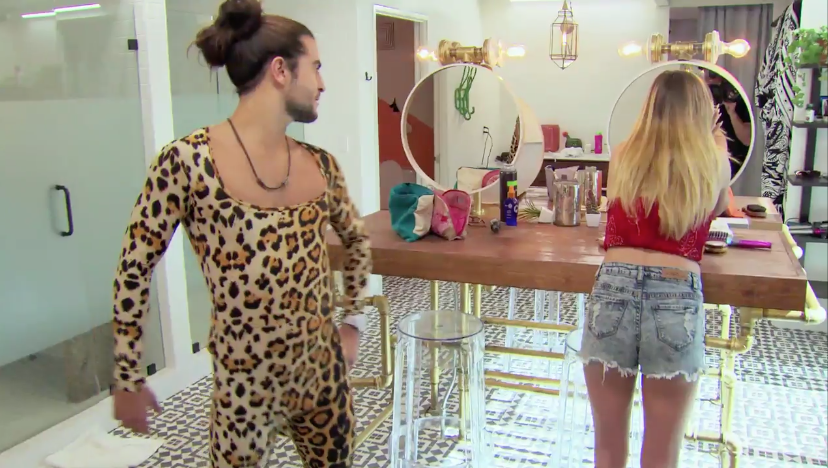