Producer Matt, you continue to be my hero. What a showing this week. Basically, The Real World has transitioned from trying to pretend like there wasn’t an entire crew of gaffers and cameramen and bodyguards living in the house with the roommates to embracing it head on. Every week, I look forward to catching a glimpse of Producer Matt like it’s a Hitchcock movie. As a (Producer) Matt-er of fact, I’m not even going to bother recapping the show anymore. This is now a Producer Matt fanfic blog.

The room is dark. There’s no natural light. Deep within the labyrinthine hallways of the Gold Spike Hotel and Casino and Life Size Beer Pong Court sits a man. The reflection of a wall of televisions plays on his face but in more like a Batcave way than a Billy Baldwin in Sliver kind of thing. His guidance counselor once said, “dress for the job you want.” So that’s exactly what Matt did. He went out and got a hat that said “PRODUCER” on it. And he’s worn it ever since. For years they mocked him. For years, he pulled crawled his way out of the muck. Guess what? Yeah, now he is a Producer. They call him Producer Matt. He checks his watch. It’s time. Producer Matt picks up the receiver on the Football Phone he got with his paid subscription to Sports Illustrated in 1991. It was a good deal, it came with 25 issues plus the NFL Preview and the Swimsuit Issue. Inside this season’s Real World  house a red phone they call the Batphone rings. It’s not shaped like a football but it does the job. Kailah picks up. Producer Matt speaks: It’s time for your birthday adventure.

Matt killed it this week. When Chris saw that there was a mass resignation from his former church, he immediately called Producer Matt in the Producer’s Lounge to see if he could go. Producer Matt makes shit happen. Producer Matt was like yeah you and a roommate can go and we spoke to the organizers and you can even publicly testify. Chris took Kailah to Salt Lake City. I don’t know anything about this religion. I could do a lot of research about it but this is a recap so it’s only fair that I go off of what was presented to me in the episode. Basically, from my understanding of the show, the way you get out of being in this church is you write and mail a letter to somebody. Look, this is serious stuff. Chris went through some terrible things at the hands of people he was supposed to be able to trust within his faith. I don’t intend to make light of anything he went through. But who is this letter being mailed to? And how does it not make you in a religion anymore? I wish there was more of an explanation of that because it is fascinating. All of these people lined up to mass resign from this church and it ends up being them dropping a letter into a mailbox. Congratulations to you Chris, on your new beginning. I hope Kailah explains this letter resignation a bit more thoroughly when she writes her kickass article.

Kailah and Sabrina feel on the outs of the house because Dean, Dione, and Ceejai like to do things without them. One of these things is going to the bathroom at the same time with the doors open so it doesn’t seem all that bad being left out. But I guess they do some other cool stuff like eating hamburgers. Then they get a mission. You know I’m pumped for this mission, right? Because we all know what a mission means. It means more Producer Matt.

Producer Matt calls the group out into the Red Rocks Desert. And he tells them that they all have to climb this giant hill in 90 minutes. If they don’t all make it, somebody is going home. You’re only as strong as your weakest link. Producer Matt is like “try and test me on this. Matter fact I want to send one of y’all home.” Producer Matt only knows one thing and that is how to produce. Results. He knows how to get everyone to go big by forcing them to face going home. Producer Matt wouldn’t care if he sent all seven of them home and had to start fresh. He’d call up his boy Jules Sylvester the spider wrangler and they’d pull together a fresh cast in under a half hour no sweat. It might be half spiders but how dope would that be?

Kailah was out drinking the night before so she is dying whilst trying to climb this mountain. Chris immediately takes his pants off and decides to go full underwear hike in the tiniest pair of underwear ever worn. It’s basically from the episode of Beavis and Butthead when they need to get jockstraps but the store doesn’t carry their size so they give them eye patches to wear instead. Chris’s undies are a black eyepatch for his pansexual junk. You know what, though, it’s a great move and I’m not mad at him for it. Dione is rooting for Kailah to not make it so that she can go home. Every other week, they want Jenna to go, well not everyone, Dione doesn’t seem to care one way or the other and Dean is still trying to smooch her woke. But now Kailah is on the hit list. Everyone makes it up, although Kailah only does it by a couple of minutes because Chris sticks with her and corrals her to the finish line with his little pantaloons. Dione tortures her by refusing to touch the flag (which means they completed it) until the very last second.

Another week and nobody has gone not big enough to go home. Producer Matt sinks into his LA-Z-Boy recliner after a long day. He cracks a Coors Original can E.T.-style. A smile turns at the corner of his lip. “You’ll get what’s coming to you. I produce you. I produce you.” 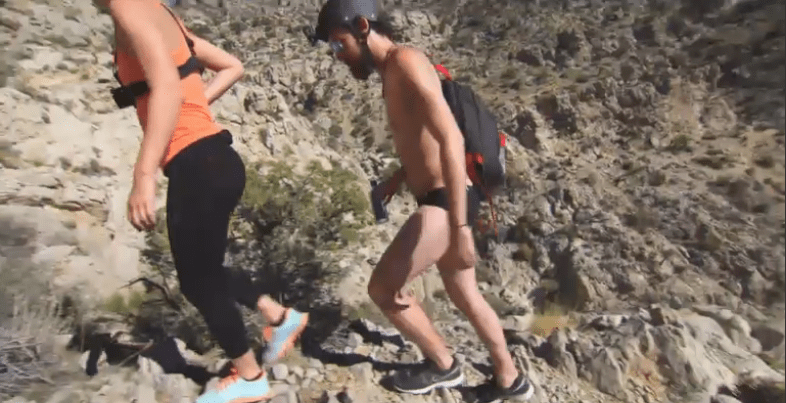