In 2003, much of the Northeast blacked out. It was the second-biggest power outage in world history, affecting some 55 million people. Five years later, Rudin Management Company was sitting down with representatives from Consolidated Edison, who asked the landlord whether or not it would be useful if the utility had a way to give 45 seconds to a minute of notice that a blackout was coming. Michael Rudin, a vice president at the company, told Commercial Observer that the short answer was yes, but then the team had to figure out what they would do with the information.

Mr. Rudin said that the question led first to the problem of elevator entrapments. Without electricity, elevators get stuck between floors. It can take hours to get everyone out across multiple buildings, but with even a little notice a landlord might be able to get riders to an exit. “Then we started to think, how would we a) receive that information and b) get all that information out to our elevators?” Mr. Rudin said. “It led us to a much bigger world than we thought.”

The world of real estate has had less contact with that of technology than other industries. The creator of the internet browser, Marc Andreesen, famously said “software is eating the world,” but you probably still enter your home with a metal key, control your heat with a bimetallic strip thermostat and flick vents closed with your index finger when the central air has made it too cold.

Soon, Rudin will unveil Prescriptive Data, an operating system that’s now monitoring and controlling all the building systems across its portfolio, developed side-by-side with the company’s engineers, so the firm knows it works with the people who most need it. Prototyped internally as “Digital Building Operating System Solution,” it’s a cloud-based dashboard that lets everyone from the company’s headquarters to all of its individual engineers know exactly what’s going on in each of those buildings and take control, as needed, in one place.

So, for example, if word came into the company that a blackout was coming, it could send an alert to every building in its portfolio that would override every elevator and either take it to the nearest floor or to the lobby, as appropriate. “It’s not foolproof,” Mr. Rudin conceded, but even if it didn’t eliminate entrapments in a blackout, the company is confident it would decrease them.

Rudin got into wiring its buildings for broadband early, as CO previously reported. Now, it’s taking advantage of that infrastructure to improve the efficiency of its overall operation. It will soon roll this building-wide operating system into a product for other commercial and residential landlords to use, most likely as its own new company.

In fact, Rudin is also piloting another interesting real estate startup’s product in one of its buildings: Radiator Labs. Inside 115 West 86th Street, a residential building between Columbus and Amsterdam Avenues, Rudin has placed the company’s Cozy over the radiators in a handful of apartments. It’s investigating the product’s effectiveness as a way to enhance its tenants’ experience while also lowering the overall cost to heat buildings.

The Cozy engulfs pre-war steam radiators, insulating them entirely, thus holding in the heat the radiator generates, until a thermostat inside the space indicates that it is needed. Then it parcels the warmth out through a built-in fan. This offers room-by-room control for a building-wide heating system known for its imprecision. It helps to control the problem of open windows in winter, which Observer discussed in recent reporting on efforts to lower the city’s carbon footprint.

Radiator Labs has been developing its product for a few years now, but with new funding led by Urban.us, it’s now “working toward growth,” as Marshall Cox told CO, during an interview at the company’s space inside NYU’s Urban Future Lab in Metrotech Center. Cozys are installed in 12 buildings in the city now with a goal of reaching 40 this year. Right now, it’s developing additional sensors to give the unit a holistic picture of the space a given radiator is meant to heat, as well as a way to interface with the boiler controller. “We want to get the best picture of the building we can get,” Mr. Cox said.

This year the company will work to get its supply chain set so that, if it gets a big order, it can deliver. It recently completed the first class of the MetaProp NYC accelerator—a program specifically geared to close the gap between tech and real estate by backing startups in the space and providing them with technical support and mentors.

A similar accelerator, AREA, is accepting applications for its three-month program through June 1.

While Messrs. Cox and Rudin had met before, MetaProp paired the two during its program. Mr. Rudin served as an industry mentor, which helped open doors for Radiator Labs. “It’s not easy to make those connections without a warm introduction,” Mr. Cox said.

This experience squares with what CO heard from Doug Chambers, the founder and CEO of FieldLens, a company that’s using mobile technology to make it much easier for owners, contractors and subcontractors to keep abreast of exactly what work is getting done on a construction project in real time, through updates, photos taken from cell phones and other methods.

FieldLens has people using it all over the country, but Mr. Chambers finds adaption slower going in New York City, where he says the attitude appears to be that builders here know how to get a job done better than anyone else. Why do they need to change their process?

With FieldLens, if a contractor knows, for example, that lighting fixtures are getting installed that day, and the firm had given a sub-contractor specific instructions about what to do on that given installation, they don’t have to go to a job site to check the work. The subcontractor can take a photo with a cell phone of the job and post it on the site’s feed.

Not only will the photo go up on a page specific to that job; it can actually be tied to the specific room, thanks to last summer’s integration with BlueBeam, a leading document management company for builders. Since then, the service has caught on, Mr. Chambers said. At a recent interview he could see reports going into the system on the new Chrystie Hotel at 215 Chrystie Street between Stanton and Houston Streets and on the Pacific Park building at 461 Dean Street between Flatbush and Sixth Avenues.

FieldLens hopes to reach owners next. “We’re pretty excited about the store owner, the residential owner, who has experienced a problem dealing with contractors and who dreads doing that work,” Mr. Chambers said. “I want those people to know that there is a solution for them.”

When technology really gets into real estate here, it’s probably going to start with literally getting inside real estate with access systems (also known as “locks”). CO spoke to two German companies on the cutting edge of this space: Kiwi and Kisi. Both companies have had success by starting with different constituencies than landlords.

Kiwi has basically cracked Berlin, said Christian Borgatu, one of the company’s co-founders. “We’re not a smart lock. We’re a smart infrastructure. And that’s very different than any other competitor,” he said. “In Germany we are reaching more than 36,000 households. When I talk about infrastructure, that’s what I mean.”

Mr. Borgatu credits the company’s success to establishing big partnerships first and going to landlords second. It convinced the German postal service and Berlin’s telecommunications provider first, both of which are companies that have an ongoing logistical challenge managing rightful access to locked spaces. Deutsche Post, the mail carrier, has to manage 100,000 metal keys that it uses every day, he said. Now, 21 postal areas in the city are largely accessed with Kiwi’s keyless system, which works both on mobile devices and with the company’s transponders.

With these two partnerships, plus an endorsement from Allianz, the insurer, in place, the company could establish more trust with owners of multi-unit buildings, who primarily use the technology to provide building access, rather than unit access.

While also originating in Germany, Kisi operates out of Dumbo, Brooklyn, and redirected its sales strategy toward a whole different group. They are seeing success with new companies that are tech savvy, such as Oscar Insurance, DigitalOcean and Harry’s Razors. “These types of companies have very strong IT departments. They like to have their doors under control via the internet,” said Bernard Mehl, the CEO.

Keyless entry systems, he said, usually come with difficult-to-use software that can only be accessed in the server room. This allows the contractor that installed it to keep control of the account. Kisi works with physical units on existing locks and a router in a company’s server room. That router gives the tenant access to Kisi’s cloud-based system, both allowing the IT team to manage the locks from anywhere and for Kisi to diagnose any problems with the system remotely.

Kisi wants to get beyond locks, however. It’s experimenting with a drone security system in its Dumbo building. So, for example, if a FedEx driver needs to make a delivery on a weekend when no one is in an office, a drone could open the front door and guide the delivery person to the appropriate space and open that door. It provides both wayfinding for the delivery person and assurance for the landlord that the person accessing the building completes his task and leaves.

We all know that people walk into open doors when others leave all the time. “You have no control over who’s coming into a building,” Mr. Mehl said. “We want to create discussions around what’s possible.” Drones can serve as very low-cost escorts and monitors.

Who knows whether indoor drones will fly, but remote access to automobiles has already taken off. Each year, fewer cars insert a key in the ignition. As more convenient access systems colonize personal transportation, it won’t be long until it makes it into storefronts and homes. That will only be the beginning for technology’s invasion of a brick-and-mortar industry.

Humans first built buildings to keep the weather out, but the cloud will inevitably get inside. 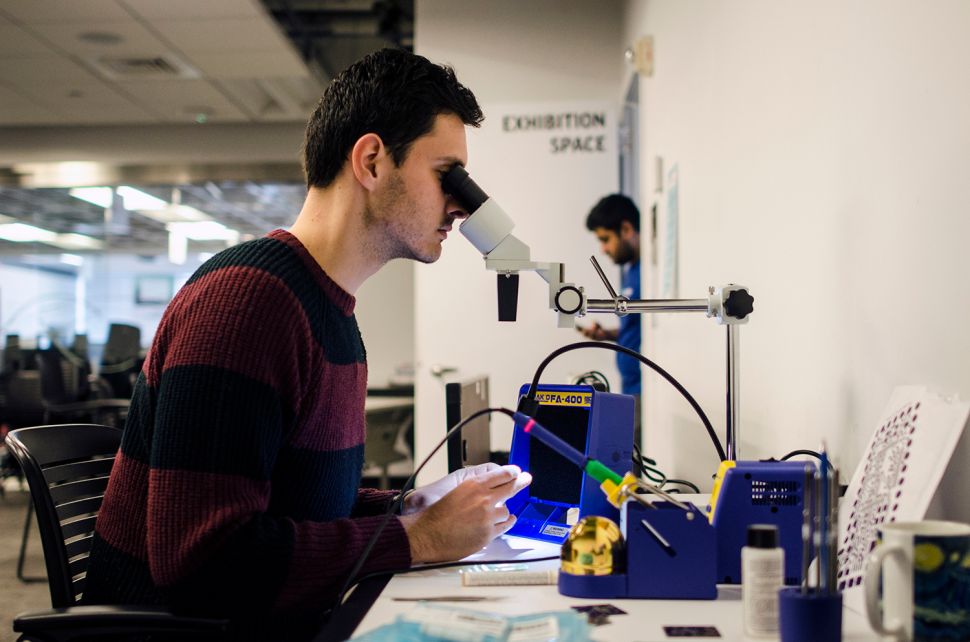