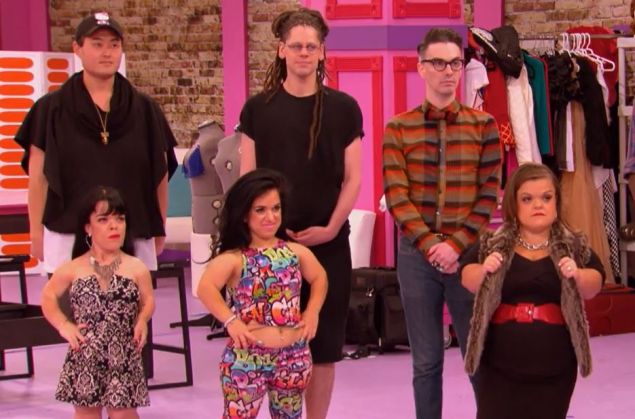 The cast with their Little Women: LA partners. Logo TV

The reading challenge is here! It’s here, it’s here, it’s here! After the letdown from last episode’s Snatch Game, this week is the complete opposite. Most of the reading challenges in the past have been mixed, but this year every single queen really manages to hit the bullseye at least once. Shockingly, the best line had to go to Naomi Smalls: “Robbie Turner, we know that you’re a vintage queen, but do you have to smell like moth balls too?” One can only imagine what was left on the cutting room floor.

For the maxi-challenge we have one of Drag Race’s annual makeover episodes. This time the queens are paired with one of the cast members from Little Women: LA (which sounds pretty much like the nadir of reality television) and given a Wizard of Oz character to inspire them. Isn’t it interesting that RuPaul’s “favorite book of all time” happens to be in the public domain? (Isn’t it also interesting that none of the little women seem to have any fashion sense whatsoever?)

Then there’s another twist: each pair must perform an interpretive dance, because reasons. RuPaul cracks himself up as he tells this to the cast. The absurdity of such a challenge is not lost on the queens, as most of them don’t even understand what RuPaul is actually asking of them. It’s hard to blame them, but that’s the nature of the show. The ridiculous aspects are just as much part of its reason for being as the fashion is.

The sappy side to the episode is somewhat subdued this year, as Chi Chi and her partner give each other mutual pep talks. Later, in an insight that stretches the definition of the term to its limits, Robbie and her little woman discover that being a dwarf is a lot like being gay. People judge you because you’re different and that’s unfair and we should all stick together and let’s not judge and Skittles: Taste the Rainbow. Would that the little people threw some shade at one another like the queens did at the beginning of the episode.

The makeovers themselves are a bit of a miss. By necessity they veer into costume territory since the inspirations are fictional characters—and from a children’s fantasy novel, at that. Season four’s version, where they had to dragify ultrabutch dudes, and last year, where they had to remake eliminated queens into their own conjoined twins, were much more interesting and really pushed the cast to think outside the box. This week almost could have been a Project Runway episode.

Chi Chi and “Dorothy” come out first in a pale blue sequence dress, a cute take on Judy Garland’s outfit in the film. In fact, all of the queens drew more from the movie than from the actual book but that’s to be expected. Again, there are very few surprises this episode or even memorable moments—and this is after the best reading challenge the series has ever delivered! Second is Bob and “Glinda” in lace bodysuits, which looked both tacky and boring.

Third is Naomi and her little Scarecrow, and here we finally see something memorable. Naomi’s makeup skills were absolutely impeccable, down to the fake stitching on their scarecrow faces. Their outfits were also quite inspired, taking an array of fabrics and making a patchwork effect that still evoked fashion. Even better, each had their own completely different look that still totally read as scarecrow. It’s no surprise that Naomi won this week; no one else even came close.

For the bottom two we had Derrick Barry and Robbie. Derrick’s tin woodman outfit was pretty bad, with a couple of cones stuck on the shoulder in a pretty haphazard way. Robbie’s cowardly lion getup was as bad, with lots of competing fabrics thrown together (with a crown on top). It ended up looking like Queen of the Flea Market rather than cowardly lion. She should have ripped off Kim Chi’s episode one makeup at the very least.

Despite the lip sync being an Icona Pop song, Robbie more than gives pop princess Derrick a run for her money. Just like Violet last year, Robbie is one of those queens whose appeal becomes more evident as the season unfolds. Sadly, there’s only so much she can do—this is a lip sync tailor-made for Britney, who delivers an outstanding back roll into handstand (Back roll???). Robbie gets sent home, but it seems quite likely Derrick isn’t far behind.

Observer: Episode one gave many people a bad impression of you, one that completely changed as the series unfolded. Was that a rough edit or were you just having a bad day?

Robbie Turner: People misconstrue it a little bit. To be a drag queen you’re sassy and snarky, you’re tongue in cheek. I have total respect for Sharon Needles! Sharon and I know each other.  Sharon tweeted me yesterday, and was sad that I was gone.

Between assigning the parts in that episode, the acting and snatch game, it seemed like your nerves got the better of you. Can you talk a bit about what that was like for you?

The worst thing in the world is being in front of someone you wildly respect like RuPaul and you say the wrong thing and go into panic mode. Can you imagine meeting Dolly Parton and saying you hate plastic surgery and women with big boobs? You’d be backpedaling!

Ru is really calm. Not in a scary way, but she’s calm and she must meditate before she walks on the set. So when you’re doing something and then you do the opposite of what she suggests for whatever reason, you’re like, why did I do or say that? Then you can’t really think how to fix it properly. My biggest advice for the show is calm down is trust yourself.

Your roller girl look seemed straight out of a 1970s photo. Does it still enrage you that the judges—incorrectly—clocked that spot-on wig?

I’m gonna have you write that down! [Done!] The only person that didn’t clock my entire look was Ru. She lets the judges do the critiques and then has her moment at the end with the final decisions. You can tell when Ru doesn’t like something and I think she liked mine. Everybody was reading the wig was saying it’s not 70s at all. And I’m like, have you ever seen anything from the 70s? The jumpsuit was deadstock. It literally was from the 70s!

By the way, I almost couldn’t even wear the outfit. We’re all mic’ed and my outfit was too tight so my mic had to be inside my roller skate. My wire had to go up my pant leg to my upper chest. But the crew is really kind and really went out of the way because my mic pack wasn‘t fitting.

Given your aesthetic, I’m assuming you have a tramp stamp of Judy Garland. Was it extra hurtful to go out on a Wizard of Oz challenge?

No, I actually thought that it was there was gonna be a challenge to go out on, let it be that. It was kind of poignant in a way. I got this weird sense of calm when RuPaul said her heart was breaking. It was perfectly tailored for that moment. Was I the worst look? I dunno. Was I mortified that my wig would come off? Yes, that was my worst nightmare and on national television. It was very very emotional.

Without naming names, is celebrity female impersonation actually drag or is it just drag-adjacent?

Isn’t it all female impersonation? Impersonation is actually harder, if you can make people forget you’re not the actual celebrity. I used to do celebrity impersonation, I did Lady Gaga and Liza and Kylie Minogue. I even did Nicole Kidman from Moulin Rouge and came out of the ceiling on a swing. No one would assume I could do a phenomenal Gaga but it’s true. Derrick is really sweet and innocent and kind, but that kind of stuff hasn’t been really shown.

If you had to read one of the queens eliminated before you, who would you read and what would you say?

Omg I’m totally on the spot. Cynthia, that doll, with her roller look. I didn’t see her get dressed at all, and then I saw her on the runway and I was like What are you wearing? It was like every tomato sauce, Ragu and Prego and Cucu, and you planned that? Honey! Lamb! What on earth? it was fifty shade of red and then they read her for filth. 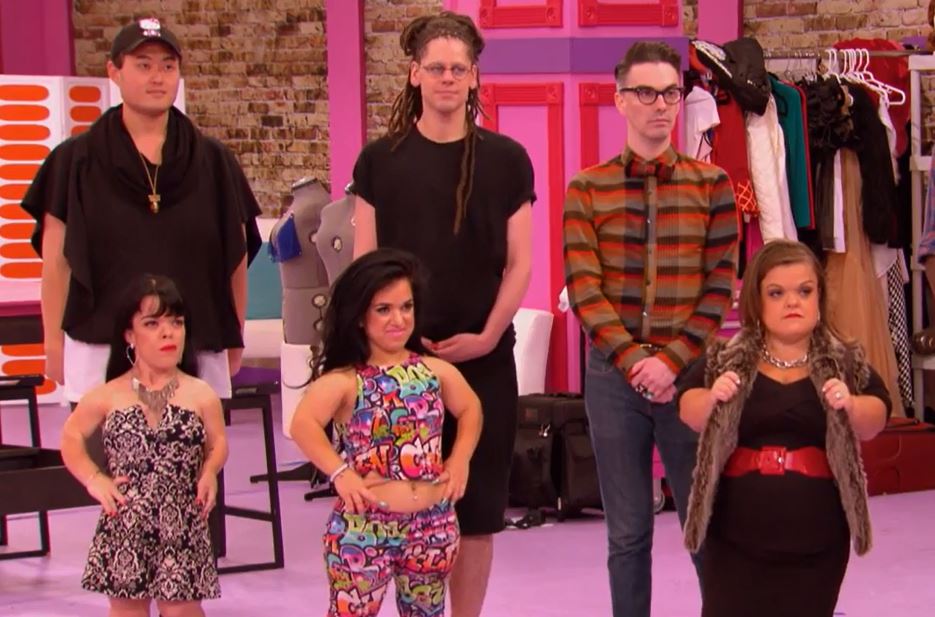