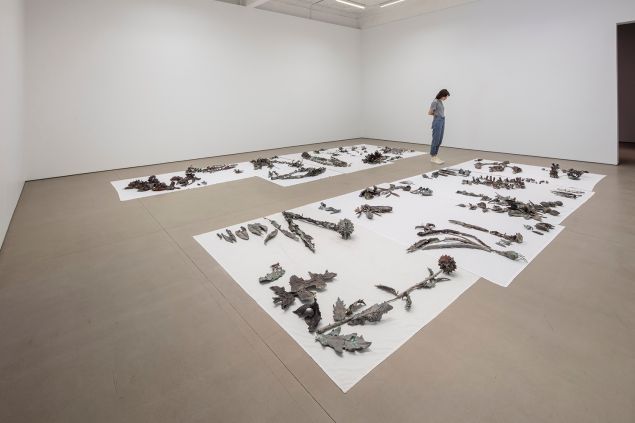 The Iranian artist Rokni Haerizadeh paints on top of 24 sheets of images taken from YouTube and elsewhere in the media. The results are surreal tableaux of events that shape the world, thanks to Mr. Haerizadeh’s imaginative overlay.

The paintings, called But a Storm Is Blowing Through Paradise, suggest that artists can’t be separated from the events of their times. It’s not a new idea: versions of events will differ, depending on whether artists see them or the mainstream media does. But Mr. Haerizadeh’s work, like much of that on display right now at the Solomon R. Guggenheim Museum, takes us to the intersection of politics and perception.

Those 24 sheets by Mr. Haerizadeh, whose works bring high prices among Dubai’s expat Iranians, are owned by the Guggenheim, which also owns works by the 15 other Middle Eastern artists in the show “But a Storm is Blowing from Paradise: Contemporary Art of the Middle East and North Africa,” which runs from April 29 to October 5.

Art can be politics by other means, and visitors should expect barbed perspectives on the region, where it happens the Guggenheim is completing a new museum. Designed by Frank Gehry (and beset by labor protests), the Guggenheim Abu Dhabi is set to open next year. Yet the works on Fifth Avenue are staying in New York, part of a plan to globalize the Guggenheim’s collection by acquiring art from the Middle East, East Asia and Latin America.

There’s no consistent style here; the show has as many themes as it has objects. Yet the works on view have much in common. Many, like Mohammed Kazem’s Scratches, observe signs of the passage of time, more likely to be jolting than serene. Mr. Kazem cut barely perceptible incisions with scissors on broad sheets of white paper. He is from Dubai, one of the world’s largest construction sites, yet this work evokes an ever-shifting desert that always looks the same. 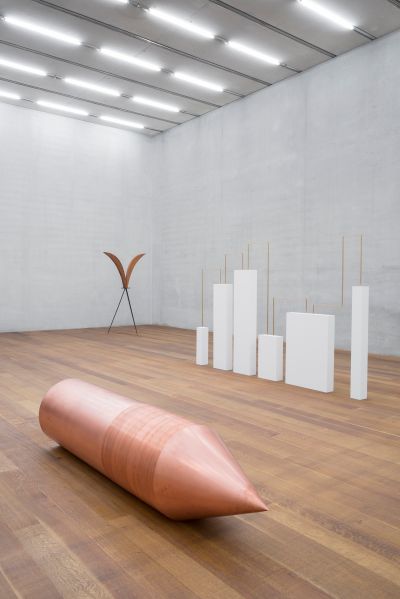 “I deal with ephemeral elements, such as the imperceptible movements of apparently fixed objects and situations, and the passing of time,” Mr. Kazem said of Scratches at an earlier showing of the work. “Everything constantly moves as time is passing; you cannot capture time, yet you are existing
in it.”

Guggenheim curator Sara Raza says that her unifying idea for the show is geometry. If that’s the case, these artists define it loosely.

A number of them are drawn to landscape, especially the constructed landscape, and to architecture, whether flattened by war or bulldozed to make way for new skyscrapers. In A Brief History of Collapses, Mariam Ghani, the New York-based daughter of the president of Afghanistan, looks nostalgically at parallels between a late 18th-century German museum and a 1929 palace in Kabul, now in ruins. (Ms. Ghani is a notable inclusion in the show, given her public criticism of the Guggenheim’s labor practices in Abu Dhabi.)

Kader Attia, a French artist of Algerian origin, has built Untitled (Ghadaia), a miniature village where a tall tower and sand-colored structures are composed of couscous, a staple North African grain. Also from North Africa, Banque Bannister by Hassan Khan is a brass rail replicated from one on the steps of a bank building in Cairo, rising by itself from the floor. A wry play on “Stairway to Heaven”? Mr. Khan emailed from London that “the bannister stands in the exhibition space, upright without the support of steps, defying gravity and our expectations. The irrational replica of a seemingly rational order.”

History is explored in Plan for Greater Baghdad, by Ala Younis of Amman, Jordan, in a model of a gymnasium originally designed by the Swiss architect Le Corbusier. The actual structure was built in 1980 by an Iraqi architect and named for Saddam Hussein. In the 1960s, Iraqi leaders saw their future in modern architecture and commissioned projects by Frank Lloyd Wright, Walter Gropius and other Western masters. The gymnasium and its history, documented on the wall, are a reality check. “They were trying to build a modern Baghdad,” Mr. Younis said, “someone is disappearing from the picture at every stage.”

In photographs by Ahmed Mater from Saudi Arabia, we see Mecca from the sky as a blue-tinted interplay of light and darkness. Mr. Mater’s panoramic photo-collages of the rapidly modernizing pilgrimage city are also on view at the Sackler Gallery in Washington, the first show of a Saudi artist in the U.S.

One jarring theme in the show is displacement, as so many in the Middle East risk their lives to reach Europe. Flying Carpets, by Nabia Kaabi-Linke, whose origins are Tunisian, Russian and Ukrainian, revisits an old Arabian mythology with stainless steel bars and rubber wires that cast shadows in a cage-like grid on the wall and floor. 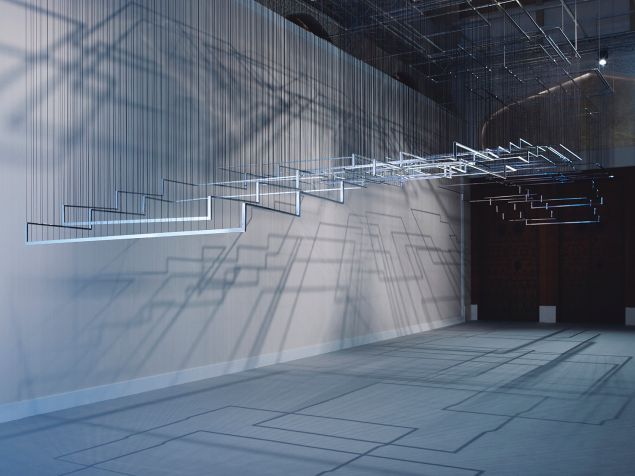 The carpet motif came to her from Venice, where she saw police harass African immigrant street vendors on a bridge. “The peddlers gathered their goods in blankets, like carpets, and flew the coop,” she said, “these people represent the frustration of not being able to circulate freely.”

In a timely example of free circulation, the exhibition’s biggest surprise is the inclusion of the Israeli-born artist Ori Gersht. Israeli artists don’t move freely in most of the Middle East, after all.

Evaders is Mr. Gersht’s video, inspired by the German-Jewish philosopher Walter Benjamin’s failed attempt to escape into Spain in 1940. Arrested by Spanish police, Benjamin committed suicide rather than return to Nazi-occupied France. The exhibition’s unwieldy title is Benjamin’s description of an angel drawn with open wings in 1920 by Paul Klee, who also fled the Nazis.

“I am interested in the arbitrary nature of borders and the manner in which they obtrude the homogeneity of the landscape,” Mr. Gersht told the Observer from London. Any other artist in the show could also have said that. 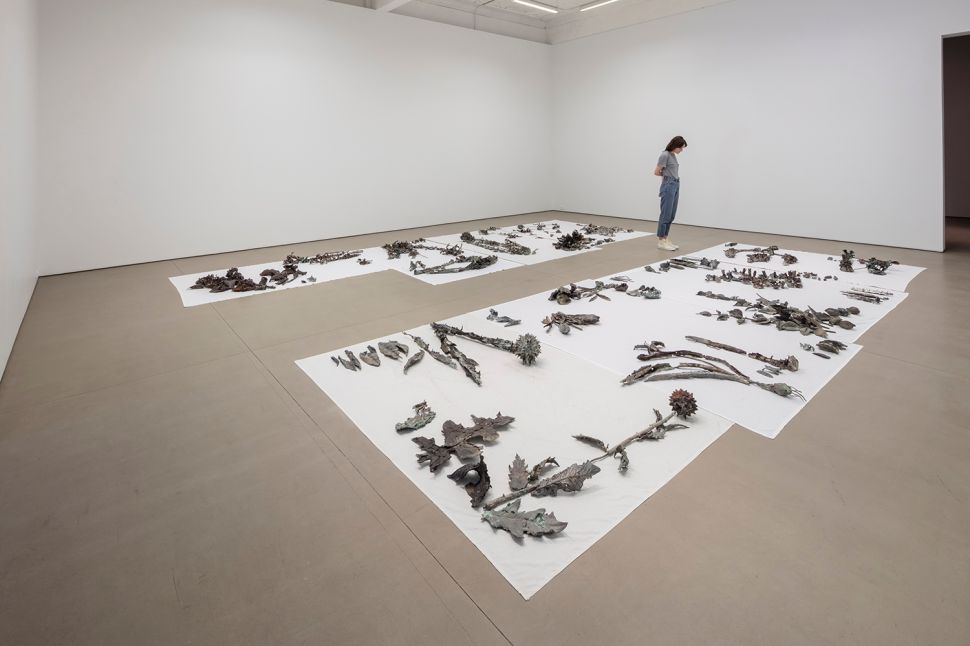