The front page of the Sunday New York Times brought one of the most important stories of the year that discussed modern marketing aimed at rich customers that has created a money-based caste system, and compared this to the Gilded Age of the late 19th Century.

John Edwards, whatever his imperfections, was right when he spoke of “two Americas.” Pope Francis, minus the imperfections of Mr. Edwards, is brilliantly right when he speaks passionately against economic inequality. Elizabeth Warren is right when she speaks on the floor of the United States Senate about fixing a financial game that is fixed in a system that is rigged. Mayor Bill de Blasio is right when he pushes for greater income equality for New York City and the nation. Senator Sherrod Brown is right when he calls for dramatic reform of the financial system as the top Democrat on the Senate Banking Committee, who will become chairman of the committee if Democrats regain control of the Senate.

I have been warning about and writing about the new Gilded Age since 2007—a new Gilded Age that has made the American and world economies bastions of economic inequality, unfairness and injustice. The original Gilded Age in the late 19th century was dominated by robber barons and mega-bankers who used their big money and power to buy elections and buy our democracy, protecting and enhancing their vast wealth and keeping the rest of America in their place of “back of the bus” economic status in the land of the free and the home of the brave.

In his poor days early in his career Ernest Hemingway once wrote that one great example of land of the free and home of the brave was barber shops that gave customers free haircuts performed by barber trainees. The haircut was free but the customer had to be brave because the untrained barbers were known to occasionally draw blood by plunging the scissors into the wrong vein on the customer’s neck.

Hemingway, often a man of the populist left, who fiercely defended veterans of the First World War against the ripoffs they were subjected to when they came home from the Great War, would almost certainly be writing of similar things if he were with us today.

This is the agenda of Mr. Trump. Whatever one calls it, it is not populist.

The Gilded Age of the late 1890’s led first to the presidential candidacy of the populist William Jennings Bryan, against whom the robber barons and ultra-wealthy bankers conspired to defeat him.

But the progressive movement during that age grew and its policies ultimately came to power during the presidency of Theodore Roosevelt, followed by Woodrow Wilson, and ultimately Franklin Delano Roosevelt after the economic inequality of the Roaring twenties and the Great Crash.

The same could have happened—should have happened—but did not happen after the last great crash before the 2008 presidential election. President Obama has accomplished some good things but never challenged the underpinnings of our modern Gilded Age which remain intact today, with the Sunday New York Times story being one of many examples.

In the 2016 campaign there is one candidate—and only one candidate—who fully and authentically runs in the tradition of William Jennings Bryan, Teddy Roosevelt and Franklin Roosevelt as a principled opponent of our new Gilded Age. That candidate is Bernie Sanders. My hope is that, if she is nominated by Democrats, Hillary Clinton would campaign foursquare in that tradition, too—but only time will tell.

There is one other candidate in 2016 who I could call a pretender to the populist mantle, and that is Donald Trump—who is sometimes referred to as a populist by those who do not understand what a populist is.

It is populist to call for financial reform, making a college education affordable to all, making health care truly universal, taking democracy out of the control of the mega-wealthy, creating a $15 an hour minimum wage, enacting systematic reform of the criminal justice system and lifting the poor out of poverty. This is the agenda of Mr. Sanders which William Jennings Bryan, Teddy Roosevelt and FDR would be pleased to be associated with.

It is not populist to oppose raising the minimum wage and say workers are already paid too much, to periodically berate women as fat slobs and bimbos, to insult Hispanic immigrants as rapists and murderers, to export American jobs by profiting from clothes made in China, to disparage American POW’s by saying troops who were never captured are preferable or to deny the American birth of an American president. This is the agenda of Mr. Trump. Whatever one calls it, it is not populist.

Mr. Sanders has championed his progressive anti-establishment populism for generations. Mr. Trump has moved from 25 years of praising Ms. Clinton and donating money to the campaigns of a long list of liberals to makIng them the object of his latest brand of the politics of insults.

Can anyone imagine Mr. Sanders or his staff telling Wall Street or the Democratic National Committee that Mr. Sanders will be soon adopting a new persona to curry favor with the party or Wall Street establishment?

One of the stories of Campaign 2016 is that there is essentially a primary within the primaries, pitting Mr. Sanders against Mr. Trump for the mantle of populist anti-establishment champion. Mr. Sanders has won this primary of populism by a landslide, which is why the Real Clear Politics summary of polling shows Mr. Sanders would defeat Mr. Trump by an epic landslide margin of some 15 percent! 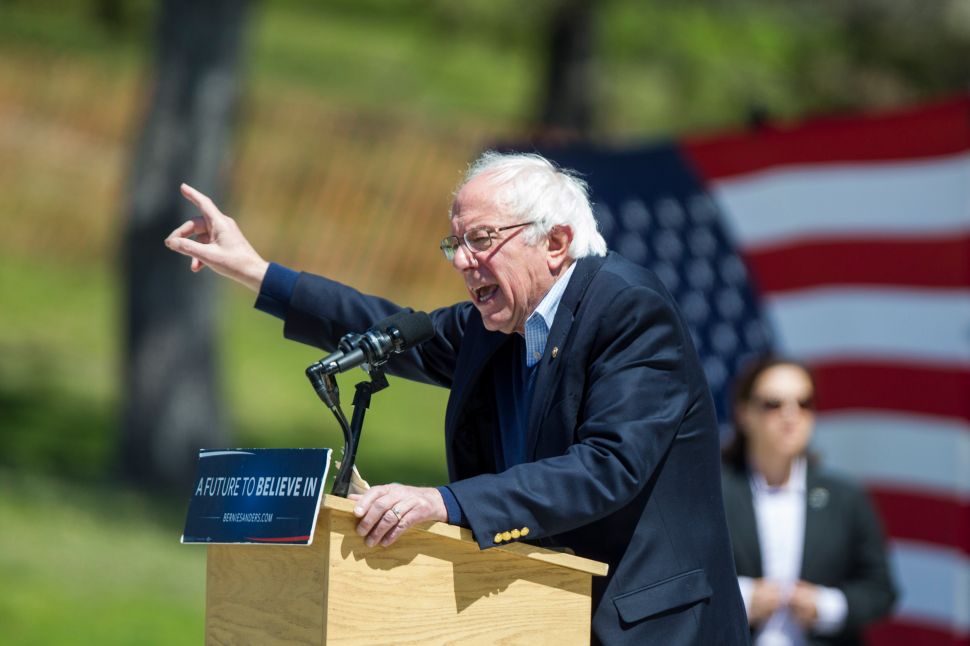