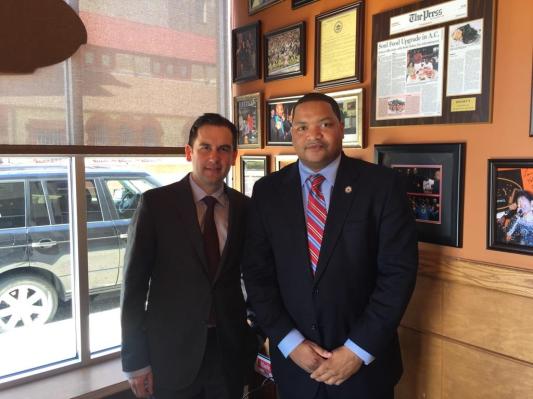 The roiling Atlantic City takeover effort made its first mark on 2017’s gubernatorial race this week as Jersey City Mayor Steve Fulop and Senate President Steve Sweeney (D-3) made dueling public appearances at each end of the state. Many Atlantic City and South Jersey voters made their first acquaintance with Fulop through the Hudson County Democrat’s tour of Atlantic City, during which he voiced his willingness to “kill it and kill it aggressively” if a plan to build a new casino in Jersey City seems likely to set it on a similar path of diminishing returns.

As Fulop was being photographed in front of the shuttered $1.15 billion Revel Casino, that monument to Governor Chris Christie’s inability to force an economic renaissance in the beleaguered casino enclave, Sweeney made his first compromise on the Atlantic City takeover plan that he sponsored and the governor supports. After a rival takeover bill from Assembly Speaker and Fulop ally Vince Prieto (D-32) proved to have legs in committee, Sweeney and Assembly Majority Leader Lou Greenwald (D-6) offered a terse compromise that would give the city the summer to cut spending by half before the Senate legislation would take effect.

While Sweeney stumped for state Senator Sandy Cunningham (D-31) on Fulop’s home turf in Jersey City, the first sign of capitulation to Prieto and pro-compromise labor groups was making the rounds.

The next day, Christie announced that he is willing to entertain alternative proposals — a far cry from his earlier insistence insistence that he would only sign the Senate bill in exactly the state it was passed in March. With Sweeney’s bill now expected to offer Atlantic City a 130-day reprieve and Prieto’s still offering two years of additional benchmarks before it would be required to revise union contracts and sell off assets like its water authority, the end result will likely be somewhere in between.

Coinciding with Prieto’s successful courting of the anti-takeover Atlantic City base, the Fulop trip to Atlantic City could be a sign that the former Goldman Sachs executive sees an opening in Sweeney’s sponsorship of the more bellicose Senate bill.

Montclair State University political science professor Brigid Harrison said that Fulop’s stated ambivalence about opening a new casino in Jersey City will play well both in South Jersey, and with voters statewide whose support for new locations has been lukewarm at best. Several North Jersey lawmakers’ swift condemnation of Fulop’s remarks, she said, will not outweigh that gain in public perception if he continues to campaign aggressively below the Raritan.

“An intelligent and measured response is valued by constituents,” Harrison said. “Even separate and apart form what the decision is, the fact that he acknowledges the learning curve and that he is taking into consideration new information is valuable.

“The creation of Prieto’s bill informed a lot of opinions, and I think that there’s clearly enough momentum moving so that that even the governor had to basically say ‘yeah if they can come up with a compromise I’ll consider.’ It clearly seemed like he was swallowing a bitter pill but he nonetheless said it.”

Sweeney’s alliance with Christie on the takeover and the lingering memory of his 2011 compromise with he governor on pension and benefit cuts for public workers could put him at a disadvantage if primary voters are given a choice between him and Fulop. Though Sweeney did fight for a bill that offers more aid to Atlantic City and requires that some of the new locations go to operators withe existing locations there, she said that his unwavering support for the North Jersey casino bill will compound those difficulties.

“I think they were albatrosses before Flop even entered the picture,” Harrison said, adding that the furor over the Senate version’s mandate to monetize the water authority will also continue to be a political obstacle. “Digging his heels in with regard to the Municipal Utilities Authority, and I guess to a lesser extent development, really hurt his political capital among city residents and surrounding areas.”

Fulop would already have an edge on Sweeney in terms of county Democratic organizations and electoral reach in the more populous North. While Sweeney has the powerful South Jersey Democratic machine on his side with strong support from Gloucester, Burlington, Cape May and Atlantic Counties, the North Jersey troika of Hudson-Essex-Passaic could tip the scales for Flop if he has a strong showing in Bergen.

It’s an open question whether the conflict between the houses on Atlantic City will be remembered by the time primary voters cast their ballots, but this week saw Prieto continue to draw out public and private unions as Sweeney opponents. While the AFL-CIO and New Jersey’s Construction and Building Trades Council are still predictably at odds on the question, members of other non-public unions like the IBEW and CWA have testified against the Sweeney bill in committee. If Prieto can indeed be seen as the proxy for Fulop that Governor Christie has claimed, that could be a very bad sign for the Senate President. 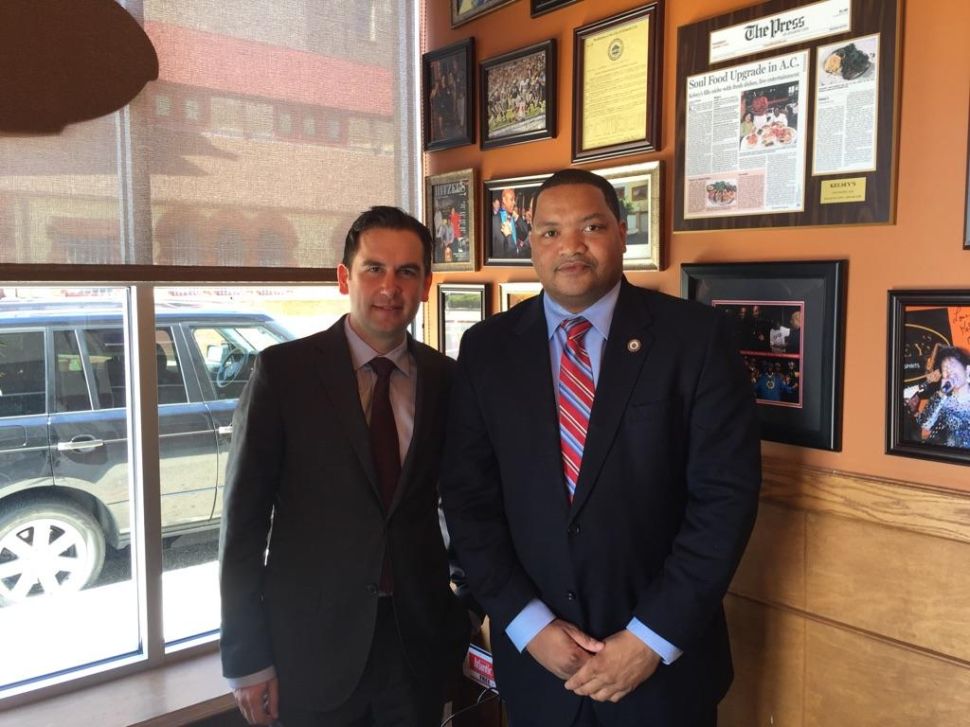