On April 12, world-renowned physicist Stephen Hawking teamed up with Russian entrepreneur Yuri Milner to announce an ambitious new mission to explore our nearest star system, Alpha Centauri, located over 4 light-years from Earth. The new project, dubbed Breakthrough Starshot, has the lofty goal of sending a fleet of tiny spacecraft to Alpha Centauri in only 20 years.

According to the project website, “With current rocket propulsion technology, it would take tens or hundreds of millennia to reach our neighboring star system, Alpha Centauri. The stars, it seems, have set strict bounds on human destiny. Until now.”

Pete Worden, former director of NASA’s Ames Research Center, will spearhead the project and is joined by a board of directors that includes Hawking, Milner, and Facebook CEO Mark Zuckerberg. The ambitious project is estimated to cost as much as $10 billion, with Milner already having invested $100 million of his own money to get the project off the ground.

Breakthrough Starshot is not the first collaboration between Milner and Hawking. Last year, Milner invested $100 million into a project called Breakthrough Listen—a project designed to search for extraterrestrial life in over 1 billion stars.

Milner, who was born the same year as Gagarin’s flight and is named after the famed cosmonaut, joined Hawking and a host of others to share their Breakthrough Starshot plan with the world via a press conference held at One World Observatory in New York City.

“55 years ago today, Yuri Gagarin became the first human in space,” Milner stated in a press release. “Today, we are preparing for the next giant leap—to the stars.”

During the livestreamed broadcast, the pair revealed their goal: to explore new technologies needed to reach Alpha Centauri. The project’s ultimate goal is to send a solar-powered fleet of hundreds or thousands of “ultra-light, ultra-compact spacecraft” on a 4.37 light-year journey with the help of lasers.

Each individual spacecraft, weighing only a few grams, are called “StarChips”. Despite ultra-thin, the StarChips would be fully functioning spacecrafts, outfitted with cameras; sensors; communications and navigation systems; and even photon thrusters. The spacecraft will rely on a ten-foot-long lightsail (similar to the Bill Nye mission with the same name) to traverse the cosmos.

The robotic explorers, essentially cosmic sailboats, use light for propulsion. The idea of solar sailing is not a new concept; however, for this mission instead of relying on sunlight or solar wind to propel them, Breakthrough Starshot would harness photons from a giant Earth-based laser array. The photons emitted by the lasers would propel the fleet’s solar sails, which are ultra-lightweight, spanning only a few meters across once unfurled.

The tiny robotic fleet would be launched into a high-altitude Earth orbit on board a larger spacecraft, or mothership. Once the fleet has been deployed from the mothership, their sails would deploy, and like a surfer catching a wave in the ocean, the tiny vehicles would ride a wave of laser-generated photons, accelerating to nearly 20 percent the speed of light or 134 million miles per hour in mere minutes.

Alpha Centauri is 4.37 light-years or 25 trillion miles from Earth. In order to traverse this vast distance, significant hurdles must be overcome. Currently we lack the technology required for a mission of this  magnitude; however, Milner is confident that advancements in this type of nanotechnology is on the horizon.

The technology void is not the only hurdle this project needs to overcome. The speeds needed to reach Alpha Centauri in such a short time have yet to be achieved. Also, the laser array that will propel the tiny fleet hasn’t been developed and would need to be constructed in a dry, high-altitude location on Earth, much like the Atacama desert.

Alpha Centauri is an appealing destination due to its close proximity and because it’s a multi-star system that could harbor many planets. If this type of mission comes to fruition, it would be the ‘Moonshot’ of this generation. Nearly 50 years after the Moon missions, we would be witnessing another historic first: the first probe to be designed, constructed, and travel to another star system, all within a generation.

“We can do more than just gaze at the stars,” Milner said during the briefing. “We can reach them.” 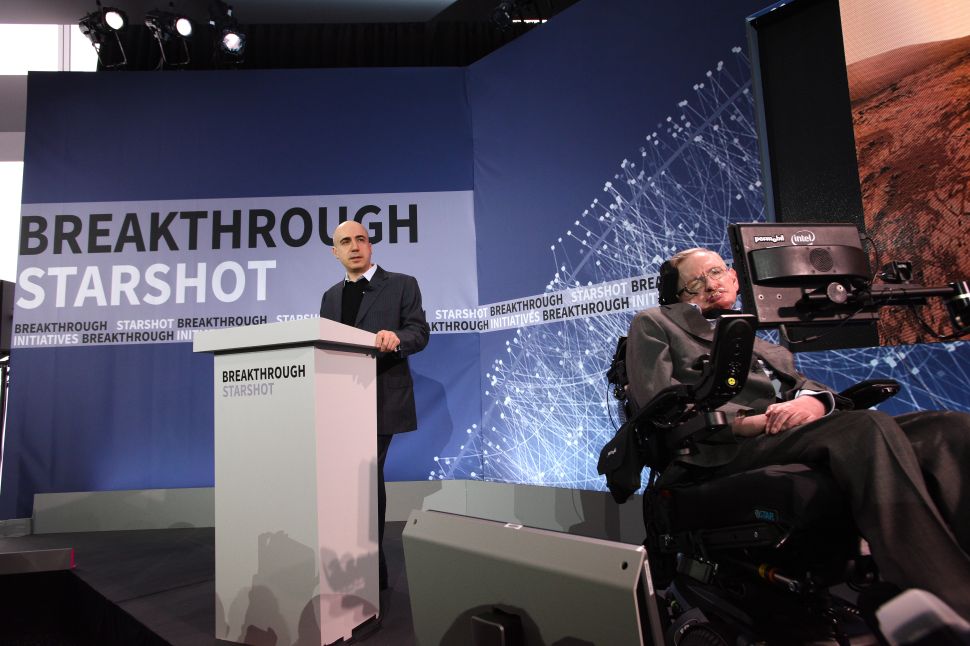