[youtube https://www.youtube.com/watch?v=_PtOAnZxB8s]
Some fun facts about professional strongman Hafthor Julius Bjornsson, best known for playing Gregor “The Mountain” Clegane on Game of Thrones and the scene where he literally crushed Thrones fans’ dreams with his bear hands (not a typo).

Fact One: Last night, Mr. Bjornsson dropped a trailer for his own branded sparkling , HeavyBubbles. It is objectively incredible. The bottles are shaped like  dumbells and come in 2-kilo, 5-kilo, and 10-kilo variations. Mr. Bjornsson tells us that if you don’t drink HeavyBubbles, you will die. I believe him.

Fact Two: There is a great chance this trailer, perhaps even HeavyBubbles itself, is an April Fools gag. There’s no discernible way to purchase HeavyBubbles, and the product’s website is just a picture of the strongman under the banner “THE BUBBLES ARE COMING SOON.” Follow up fact: I don’t care. I don’t care even a little if this is fake because it brought me an unprecedented amount of joy to watch the most fearsome warrior in Westeros shill bubbly from a bathtub. In fact, should this be an April Fools joke, whoever created it is losing money. I think I speak for everyone when I say I’d gladly drop, like, dumb amounts of money on HeavyBubbles.

Fact Three: There’s actually a just-as-likely chance that Mr. Bjornsson himself is, in fact, an April Fools joke. I have yet to see evidence sufficient enough to prove he is even real. The Game of Thrones scene where he kills Oberyn Martell’s doesn’t even crack the top ten most terrifying videos Mr. Bjornsson is featured in. Here he is breaking a 1000-year-old strength record previously set by actual Vikings. Here he is throwing a washing machine. Here he is tearing his shirt and screaming into a terrified woman’s face that he is “the future of strength.”

In summation: The Mountain from Game of Thrones has his own brand of sparkling that may or may not  exist and if you don’t drink it, you will literally wither away and die. 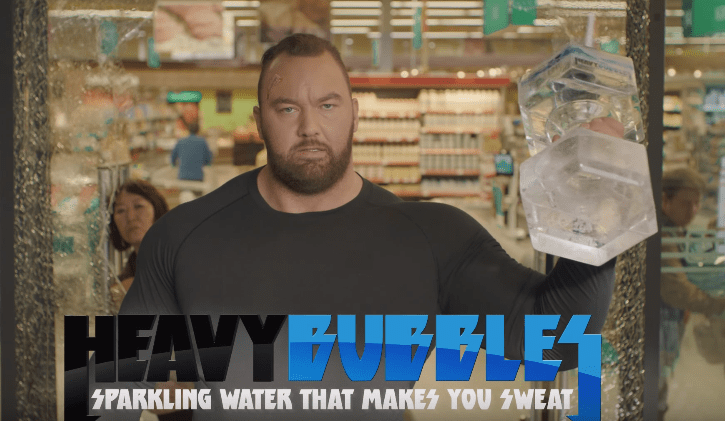