The way some people talk and write about The Americans, it’s like they’d never listened to New Wave or had sex until Elizabeth & Philip Jennings did. This is a great show, one of the best shows, and there’s no question its astute pop-music cues and explicit sex scenes factor prominently into that. But is the combination of Yaz and oral really all that exotic? Jeez, just put the kids to bed early and put on some Berlin already. It’s the grim morality play, not the Big ’80s hits and the cowgirl position, that are irreproducible elsewhere.

This, I suppose, is my way of saying that the desperate “Under Pressure”–soundtracked fuckfest that concluded “Clark’s Place,” last night’s episode, left me a bit deflated. This is not entirely The Americans’ fault: Fear the Walking Dead shit the bed so badly with its try-hard use of “Five Years” during last weekend’s season premiere that David Bowie is going to be very difficult to enjoy on any other series for quite some time, especially in light of the likelihood that the late genius’s catalogue will be every TV show’s go-to for EMOTIONAL RESONANCE for the rest of the year. I can’t lay that at the show’s feet, any more than I can in good conscience protest that the lyrics were, to use the single worst phrase in any TV critic’s vocabulary, “too on-the-nose” — not after The People v. O.J. Simpson proved time and time again that when it comes to period-appropriate pop, blunt can be beautiful.

No, in this case, the problem is unique to the song itself, I think. Simply put, “Under Pressure” is so perfect, such a marvelous showcase of both Bowie and Queen’s equally sorely missed Freddie Mercury, that an intensely personal relationship and a set of associations with the track are almost impossible not to form. Invested though I may be in Philip, Elizabeth, Stan, Martha, Paige, and the rest of the gang, I’ve also drummed along on my car steering wheel to the “Can’t we give ourselves one more chance?” so hard and so often that my hands can feel the sense-memory as I type this; the emotions it brings up can’t help but drown out the ones the story demands. A strategically deployed anthem can be a knockout blow on a show, as it was last season with Fleetwood Mac’s “The Chain,” for instance, or on Mad Men when Don Draper listened to “Tomorrow Never Knows” like he was trying to decode a message from an alien culture. (Which, in effect, he was.) In this case, though, the song overwhelmed the sequence whose spine it provided, Keri Russell’s bare ass be damned.

So in thinking about the episode, I find myself focused more on relatively minor (and less musical) moments and leitmotifs. Foremost among them is the fallout from last week’s execution of Nina, beloved by just about everyone else on the show. The bad news is passed from person to person like a virus every bit as virulent as Glanders. It drives Oleg apart from his father, who doesn’t understand why his son cares so much about a traitor when his own brother’s death in the patriotic service of their country is itself treated as a crime to be hushed up by the authorities. It drives a wedge between Oleg and his otherwise sympathetic boss at the Rezidentura, Arkady, who’s furious with her for blowing “chance after chance” to make up for her crimes — and who’s likely nervous that her deception will reflect poorly on him for vouching for her honesty. And it may well drive Oleg into the arms of America (shoutout to Bono) for real: The conversation in which he informs Stan of their mutual love interest’s death sees him complaining about the conduct of his country in a shockingly candid way. It isn’t difficult to imagine his disconnection from the society he’s supposed to serve leading to an even more serious treason than hers.

Oleg wasn’t the only kid questioning the choices of his parents, either. Henry Jennings has been spending so much time with Stan Beeman that when the agent’s son Matthew comes over for his first visit in ages, he finds his former next-door neighbor ensconced in the home like a new stepbrother everyone forgot to mention he had now. The Beeman boy warms up to Henry quickly enough, but his initial bafflement at his presence echoes the words of Paige Jennings to Pastor Tim: “I feel like there’s this whole grown-up conspiracy. You’re all so sure about what I’m supposed to feel and what I’m supposed to do, but then you just do whatever you want.” Lacking an involved and invested father figure, Henry gravitates to Stan as a substitute; Paige, roped into her parents’ quite literal conspiracy, does not have the luxury of being neglected by them. On the contrary, she’s been made responsible for their continued security and happiness, an awful and unforgivable relationship inversion for a parent to subject their child to. It’s only dumb luck and her innate goodness that protects Philip and Elizabeth from damaging their daughter even worse: She believes their entreaties to forgive Pastor Tim for blabbing her secret to his wife stem from the affection and respect they feel for the man, not from the need to stay in his good graces lest one couple or the other end up dead.

If only Martha Hanson had a Pastor Tim to call her own. Instead, she has “Clark,” a “husband” who flies the coop when he receives word that his wife may have been tailed to his crashpad, taking their “wedding” photo with him just in case. Even to reach him, she has to dial a third party from a pay phone using a memorized number; she knows so little about the instructions she’s been given that she assumes Clark is actually there with the woman on the other end of the line. To invert the words of Morrissey, the closer Agents Aderholt and Beeman get, the more Clark ignores her. For good reason: As Elizabeth watches Philip shake Aderholt’s hand when he arrives at Stan’s house to pick him up for work, she realizes that this man, who’s also the agent who took Martha out for a mysterious dinner, was the same guy she physically fought on the street alongside Agent Gaad when she was nearly caught stealing sensitive personnel documents on the CIA’s involvement in Afghanistan. If anyone can put two and two together, it’s this guy.

Meanwhile, the Jennings make a calculation of their own that they cannot bring themselves to solve out loud: If Martha’s cover truly has been blown, they’ll likely wind up complicit in her death, if not responsible for it directly. This is the inconvenient truth Elizabeth attempts to cover up for her already grieving husband by lifting up her leather skirt for him, using sex’s psychologically soporific qualities in a way that should be familiar to anyone who’s shaken loose of sadness’s grasp by doing the one thing guaranteed to feel so good it’s impossible to feel anything else, at least for a while. “Love dares you to change our way of caring about ourselves,” yes, but also, “This is our last dance.” 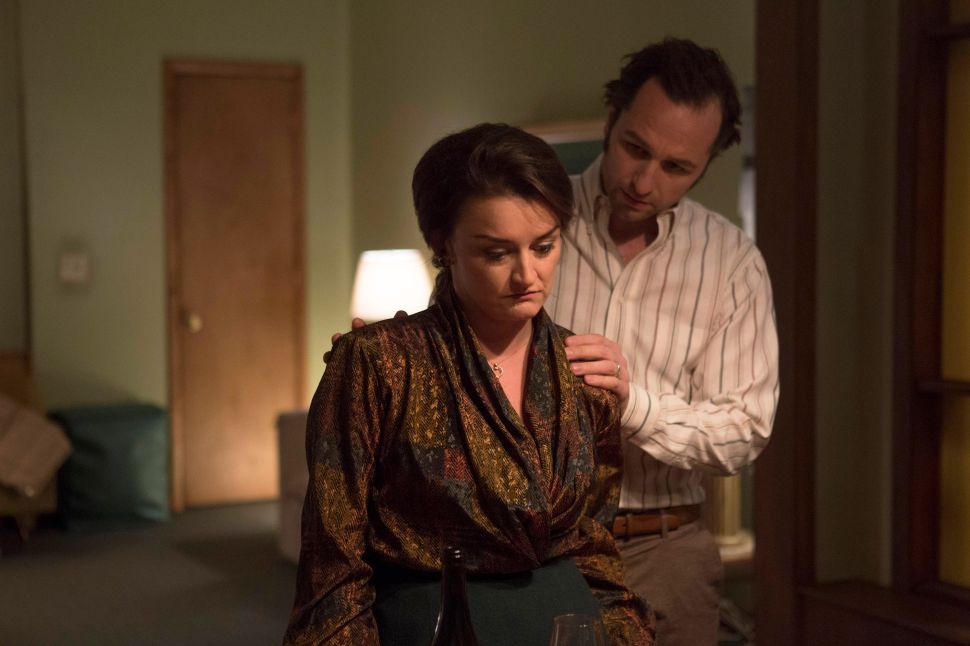 Filed Under: TV, The Americans, ,