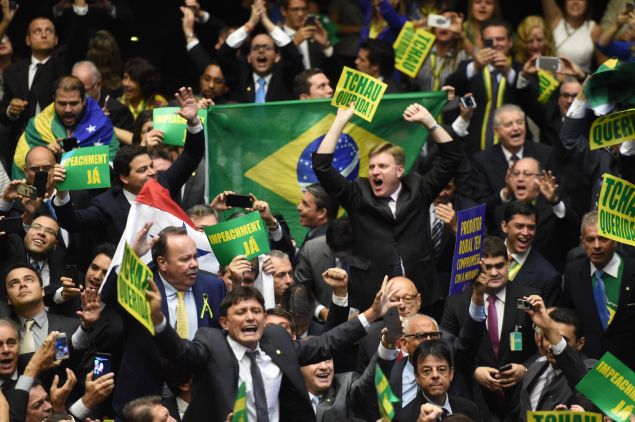 Brazil’s lawmakers celebrate after they reached the votes needed to authorize President Dilma Rousseff’s impeachment to go ahead, at the Congress in Brasilia on April 17, 2016. (Photo: EVARISTO SA/AFP/Getty Images)

Following a three-day marathon session at Brazil’s Chamber of Deputies, the opposition camp erupted in cheers last night when the 342th vote—a two-thirds majority of 513 seats—was tallied, sealing the approval of the impeachment motion against President Dilma Rousseff. The final score of 367 votes pro-impeachment and 137 against it, seven abstentions and two absentees underlines Ms. Rousseff political fragility as the proceedings move to the Senate, where her fate will be decided in the coming months. “Dilma will be certainly impeached by the Senate,” says David Fleischer, emeritus professor of political science at Universidade de Brasília. “She lost completely the ability to govern after the Chamber’s vote.” According to Eurasia, a political risk consultancy, the odds that Ms. Rousseff will end her term in 2018 stand at 25 percent.

Pro-Rousseff crowds chanted “there will be no coup, there will be a fight,” a mantra adopted by the president.

Following the vote, the general attorney José Eduardo Cardozo spoke on behalf of Ms. Rousseff. “Is she going to resign? No,” he said. “If she is victim today of a concerted action, she will fight with her strengths to show to society that [she] doesn’t give up the democracy that was hard-won.”

In front of the Congress building, a modernist masterpiece designed by architect Oscar Niemeyer in the 1950s, authorities erected a 6.5 foot metal security wall to isolate the pro from the anti-impeachment activists that occupied the front lawn during the vote. The wall illustrates the bitter polarization that dominates Brazilian politics. The right side of the lawn was taken by anti-Rousseff activists dressed in Brazil’s national colors yellow and green, shouting “down with Dilma!” and “our flag will never be red!”, a derisive reference to the 13th-year Labor’s Party (PT) rule.

On the left side, dressed in red, pro-Rousseff crowds chanted “there will be no coup, there will be a fight,” a mantra adopted by the president herself and her mentor, former President Luiz Inácio Lula da Silva, to accuse those who defend the impeachment of attempting against the constitutional rule. Despite the Supreme Court endorsement of the impeachment proceedings, Ms. Rousseff remains defiant and has signaled she could appeal against the merit of the case.

Although Ms. Rousseff is not accused of corruption—unlike many of congressmen that now judge her—she could be impeached on the grounds of having manipulated the federal budget to hide a multi-billionaire fiscal deficit on the eve of her 2014 re-election. In this highly politicized process, she is also accused of using state-controlled banks’ money to finance the federal administration’s policies, which is forbidden by law. She denies both charges.

If the Senate accepts the case, Ms. Rousseff will be immediately suspended temporarily for 180 days, the final deadline of her congressional trial. Once suspended, she will be replaced by Vice-President Michel Temer, a seasoned politician of the PMDB, a pork-hungry party that along with PT have key members denounced by the “Car Wash Operation.”

Carried out by a task force that includes the Federal Police and the Judiciary branch, “Car Wash” uncovered a massive graft scheme that has spread from the state-controlled oil company Petrobras, the leading operator of Brazilian offshore oil reserves development, to the state controlled electricity company Eletrobras, that led the construction of the $ 8.5 billion Belo Monte hydro dam in the Amazon jungle. Mr. Temer’s name has also surfaced in leaks related to the probe. He denies any crimes.

Since he and PMDB decided to leave the government coalition in March, they have been actively lobbying fellow congressmen to vote for the impeachment in exchange for political benefits in his future administration. In a recent online video speech, Ms. Rousseff accused the VP of treason and of planning to cut on social welfare programs that are the hallmark of hers’ and Lula’s administrations. Mr. Temer shot back on his Twitter account: “it’s a blatant lie (…) I will keep all social programs.”

Most political analysts predict that a Temer administration could kick off as early as mid-May. “Although it is an almost mission impossible, I think Temer will succeed,” says Fleischer. To get things done in a very volatile political outlook, a Temer administration would need to recompose the congressional support coalition needed to approve unpopular austerity measures, such as cutting expenditures to shore up the fiscal front. That in turn could bring badly needed investments to stimulate the economy, plagued by the worst downturn since the 1930’s. The IMF predicts GDP to contract 3.8 percent in 2016 and level off in to zero growth in 2017. According to Eurasia, the odds that a Michel Temer administration will last until 2018—year of the next presidential election—stand at 65%. 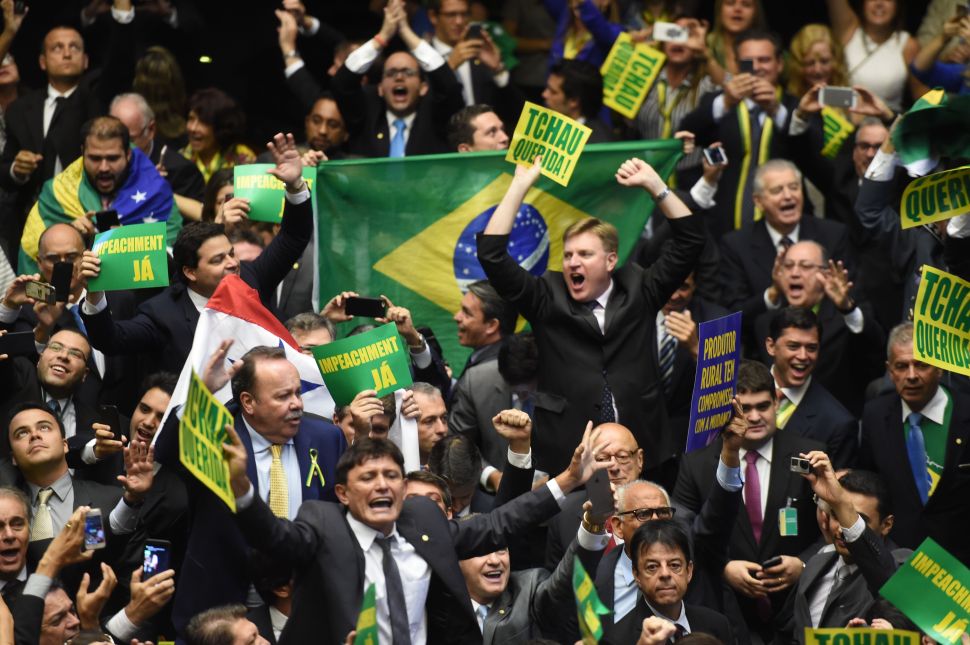