In January, U.N. Secretary-General Ban Ki-Moon made the outrageous assertion that the slashing of innocent Israeli civilians by knife-wielding Palestinians is justifiable as a response to “the weight of a half century of (Israeli) occupation.” This contemptible statement from the head of the U.N. reflects years of vicious propaganda against the Jewish state.

The canard that Israel is illegally occupying land belonging to “indigenous Palestinian Arabs” has been repeated so relentlessly, for so many years, in so many international venues, that it is now accepted as a fundamental truth.

When you hear the words “occupied territory,” you’re conditioned to think only of the fictitious Israeli “occupation of Palestinian land.”  You’re not reminded of the occupation of northern Cyprus by Turkey or the Western Sahara occupation by Morocco. Why not?  Because the international community obsessively promotes the idea of Israeli occupation to defame Israel’s legitimacy. It is the leitmotif of the bien-pensants, echoing through the halls of the U.N., in chambers of government, in academia and the press.

The “occupied Palestinian territory” is neither “occupied” nor “Palestinian.”

For the international community, occupation refers to Israel’s control of territories it obtained during its defensive 1967 Six-Day war, fought against multiple Arab armies to preserve its survival. Palestine has never existed as a distinct political entity. Since Solomon and David ruled the Jewish kingdoms, this area was always part of empires from Roman times to the Ottomans, who lost this territory in WWI.

The 1917 British Balfour Declaration provided for a Jewish national homeland in the area called Palestine. In July 1922, the League of Nations, recognizing “the historical connection of the Jewish people with Palestine,” gave Britain the Mandate for Palestine, including the responsibility to encourage the establishment of a Jewish national home within territory which included today’s Jordan, Israel, the “West Bank” and Sinai. Before the Mandate was finalized in 1923, 75 percent of the land designated for the Jewish homeland was taken away and given to Transjordan, now called Jordan.

Between the world wars, the Arabs in the region fiercely opposed the presence of Jews on what they considered “sacred Muslim territory,” committing continuous terrorism against the local Jewish communities.

The U.N., whose Charter recognizes the Jewish rights under the League’s Mandate for Palestine, passed Resolution 181 in 1947, recommending a partition of Mandatory Palestine into two states: one Jewish, the other Arab. The Jews accepted partition and, in May 1948, declared their independence.

The Arabs rejected partition, and five Arab armies invaded the nascent Jewish state. An armistice agreement was signed; Egypt controlled Gaza and Jordan controlled the “West Bank” and eastern Jerusalem. Jordan ruthlessly expelled all Jews and obliterated all historical vestiges of Jewish presence in that land. For 19 years, there was no international pressure to end Jordan’s rule.

In 1967, with Arab armies massing on Israel’s borders, threatening to destroy the Jewish state, Egypt blockaded the Straits of Tiran to Israeli shipping, cutting off Israel’s main supply route for oil. President Lyndon Johnson described this act as the casus belli justifying Israel’s defensive war against Egypt, Syria, Iraq and Jordan. The subsequent Israeli control of land was not a consequence of some grand expansionist scheme, but rather was incidental to Israel’s success in defending itself against an Arab attempt to destroy it.

The Oslo Accords of 1993 and 1995, legal agreements signed by the Palestine Liberation Organization and Israel, provided for Palestinian self-rule in the majority of the “West Bank.” In 2005, Israel withdrew its military and all civilians from Gaza, giving complete control to the Palestinians. Today, most Arab-Palestinians live under Palestinian jurisdiction.

Under international law (Hague Regulations 1907, Articles 42,43; Fourth Geneva Convention), when the military forces of one nation take control of the sovereign territory of another nation (a foreign territory), that situation is legally called “occupation” and the nation taking control is termed an “occupier.” Because the West Bank and Gaza, under international law, were never legal sovereign entities or sovereign territories of any other state, there is no legally recognized owner of these territories to which the land can be returned. Today, the status of the territories remain “in dispute,” subject to the outcome of future permanent status negotiations.

Therefore, it is incorrect to characterize Israel as an occupier and the West Bank and Gaza as occupied territory.  So why do the U.N., The New York Times, TV talking heads, government officials and the mass media claim Israel is occupying Palestinian land?

Within the context of the Israeli-Palestinian conflict, “occupier” and “occupation” have become political terms applied only to Israel, without regard for their legal meaning. The emotionally charged word “occupation” reduces complex situations of competing claims and legal rights to two categories—right and wrong—clearly implying that occupation (and Israel) is wrong. The term “occupation” has become a pejorative used to vilify the Jews. Branding Israel an “occupier” equates it with brutal military occupations such as Nazi Germany’s occupation of European countries and the Soviet Union’s occupation of Eastern Europe. This “big lie” is exploited to claim that Israel is responsible for the welfare of the Palestinians.  It denies Israel’s right of self-defense against Palestinian terror and relieves Palestinians of responsibility for their actions.

In our multicultural world, consumed with Western guilt and third world victimhood, the hostility to Jews and Israel is directly linked to the Left’s disdain of the West and its values. Grossly distorting the facts, the Left views Israel as a Western colonizer, not as a nation achieving self-determination in their historical homeland.

Europe, awash in remorse over its behavior during WWII, cannot seem to forgive the Jews for the Holocaust—a perverted transference of guilt from the perpetrator to the victim that absolves the former of evil-doing.

Hitler’s Minister of Propaganda, Joseph Goebbels, knew that “if you tell a lie big enough and keep repeating it, people will eventually come to believe it.” Today’s 21st century propagandists employ the very same Nazi propaganda tactic for the same purpose—to destroy Jews.

Ziva Dahl is a fellow with the Haym Salomon Center with a Master of Arts degree in public law and government from Columbia University and an A.B. in political science from Vassar College. Her bylines appear in the New York Daily News, the Observer, and The Hill. 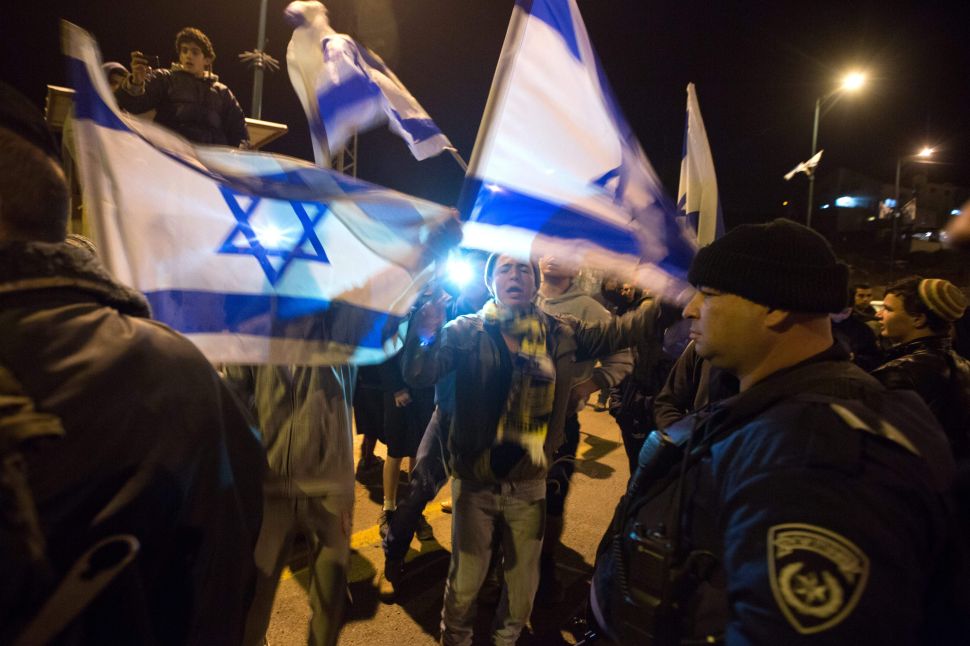