I am sorry that circumstances compel me to have to write about the Rock’n’Roll Hall of Fame again. However, the music of our lives is so richly diverse, moving, beautiful and meaningful, a soundtrack to our most trivial and monumental moments; it is Tim Buckley and the Cocteau Twins, Opeth and Orange Juice, Nick Drake and Lee Dorsey. It is not the over-simplified, biased, one-dimensional version of the story told by Rolling Stone and the Rock’n’Roll Hall of Fame. In other words, God bless you, Mr. Fred Neil, Mr. Phil Ochs, Ms. Kate Bush, Lemmy, the Association, Eddie Cochran and Mr. Mike Nesmith. I am glad you are loved, and hate those who fail to accurately tell your tale.

On the season finale of HBO’s Vinyl, Jann Wenner (played with sinister if foppish aplomb by Oliver Platt) strong-armed a terrified rock band into slandering a much-loved musical icon (Steve Miller, portrayed by Tim Robbins). In the episode’s cold open, Miller had made the mistake of publicly complaining about the Rock’n’Roll Hall of Fame.

An enterprising middle aged journalist (played by a digitally altered and thinner Vincent D’Onofrio) spots some peculiar inconsistencies in the band’s anti-Miller statements, and goes on to make the following pronouncement, interrupted half-way through by a hallucination of Joe Meek (played by Adrien Brody) dancing hysterically to Heinz Burt’s “Just Like Eddie”:

“A quarter of a century ago, Sebastian Bach, whose homophobia was obviously stoked by his remarkable resemblance to a 1970s Breck Girl, was photographed proudly wearing an ‘AIDS Kills Fags Dead’ t-shirt. This horrifying and bigoted gesture made Bach the biggest douche in rock history…until now. This week, the Black Keys signed off on a statement handed to them by the Powers That Be at Rolling Stone magazine, slandering a popular musician who had dared speak out against their infamous He-Man Woman-Haters E-Street Band-Lovers club. In doing so, these Black Keys, open-parentheses ‘Shitheel Shitpieces, 4Ever’ close parentheses, have stolen the crown from Bach, and assumed the mantle as the Biggest Douches in Rock History. And that’s a very, very hard-won crown—just ask any child who ever asked Ric Ocasek for an autograph, or any waitress who ever waited on Paul Simon.[i]”

I turned off the episode in order to research the reality behind the incident depicted in the show. It turned out to be entirely true: in the backstage press room at April 8th’s Rock’n’Roll Hall of Fame induction ceremony, Steve Miller had dared to air some barely hidden truths about the Hall. For instance, it’s a well-known but never publicized fact that inducted bands have both their inductees and their set lists dictated to them, something that makes most acts angrier than Angry Jock MacGriff, the Angriest Man in East Anglia and runner-up in 1998 Angriest Man in England Competition, Teen Division; but virtually every act is too scared to say boo, lest they piss off the Joffrey Baratheon of the AARP set, Jann Wenner.[ii]

So I took a look at Miller’s statements, the one that made the Black Keys so eager to run home to Daddy Rolling Stone and tattle on Big Bad Mister Miller. Miller’s on-stage acceptance speech was relatively mild; at virtually every HOF induction, someone makes a statement vaguely like this (in fact, NWA alluded to similar territory); there was nothing too controversial there. But Miller let loose a little more in the backstage press room; he referred to some of the strong-arm tactics that the Hall makes with song licensing agreements and dictating set lists and inductors, and he complained about the event’s high ticket prices and the Hall’s unwillingness to accommodate musicians with the valued ducats. To tell you the truth, other than a general level of vehemence that was notably higher than most of the terrified and over-medicated bunghole-suckers the Little Steven Appreciation Guild trots out for these things, his comments weren’t really that strong at all;[iii] not only did Miller not name any names or point specific fingers, but there is so very, very much more he could have said. But for some reason, Miller’s courageous reality check at Queen Joffrey’s Annual Ringo-Suckoff Debutante Ball really got under Wenner’s thin and over-buffed skin.

READ THIS: The Ramones’ Debut Album Is Still the Best Punk Record of All Time

So Kim Jann-Un summoned a terrified, susceptible and desperately eager to get-on-their-knees-and-please ensemble to read a script and attack Miller. The Black Keys, proving they are a band that makes Ted Nugent seem credible (because at least Ted Nugent means what he says and doesn’t just say it because he’s terrified and was promised him something in return), went on record in Rolling Stone and condemned the musical legend who had dared to speak some well-known truths about the Beatles Bum-Lick Preservation Society.

“As we get older, I hope that when I’m in my twilight years, I can look back and be grateful to the people who have appreciated me and to be able to give back,” mewled Dan Auerbach. I guess Auerbach, who bears a strong physical resemblance to Chris Elliot imitating Jared Leto, forgot that it’s actually fans, consumers and merch-buyers who build careers, not the people who never paid for a record in their entire lives. “I just want people to know that he’s allowed to say whatever he wants, of course,” Auerbach continued, failing to complete that sentence by adding, “I mean, as long as Jann approves, and if Jann doesn’t approve, wooh-boy, then we’ll go after ‘em like Joe E. Ross attacking a $15 dollar Vegas whore holding a two-dollar Eggplant Parmesan Wedge.”[iv]

Now, this is where it gets interesting. As stated, I immediately suspected that the Black Keys, desperately searching for the right anal-fissure to dutifully polish with fingernail and tongue, may have signed off on a statement handed to them; further I am guessing Auerbach was told something like “Condemn this Miller traitor for us and we’ll give you the cover/a rave review of your next album/make sure you get into our Legion of Beatle-Loving Power Bottoms,” (or all of the above).[v] But the great Ira Robbins, one of the legendary music journalists of our era, found the smoking gun—well, I’m calling it the smoking gun, Ira didn’t—but, indeed, that’s what it is: the smoking gun, the man with the umbrella, the second shooter, the second Becky from Roseanne; the bit that underlines that the whole thing was total bullshit.

In the Rolling Stone condemnation of Steve Miller, Auerbach says this: “We were so disappointed that as soon as we got offstage, we left while he was playing. We left immediately. We walked right outside and left the fucking building. I went back home and picked up my guitar.”

But here’s the problem: Miller’s on stage comments were pretty mild, nothing even the most over-sensitive Jann-Lover could get too huffy about. His more controversial comments, the ones that pissed Dan/Jann off, were actually made after he played, backstage in the press room; and according to Auerbach, he couldn’t have seen those, because he had already left the building in a huff.

So unless Auerbach really, really had to take a world class dump and is one of those types who just has to use his own bathroom, Auerbach is either totally lying, or didn’t bother to proofread the statement he was supposed to assign his name to.[vi]

It’s not easy to become the Worst Band Ever. Think, just think, of all the morally bankrupt and musically corrupt acts that have left a slime trail across the landscape of the last sixty or seventy years. Think of white supremacist hardcore bands, big-game hunting guitar heroes, pallid cross-waving metal bands, think of all the drunk-driving killers who hid behind microphones and all the tween-fuckers hiding behind “Hotel California.” Yet the Black Keys have suddenly vaunted to this sorry, sordid pinnacle, where the outstretched arms of career-killing thieving manager Don Arden and master-stealer mob-launderer Morris Levy greeted them. And those two gentleman, the grand, old silverback lions of the worst rock has to offer, bowed nobly to the Black Keys and announced, “You sold out a rock legend for a few handfuls of silver. You protected the interests of a woefully corrupt organization that misrepresents, misinterprets, and spreads misinformation about the beautiful history of rock just because someone told you it was good for you, because someone told you it might get you a cover of a discredited, ridiculous magazine. You are, dear Black Keys, the very, very worst.”

[i] I’m the child Ocasek was unspeakably rude to. I’ve got a long memory.

[ii] Guess I won’t be writing for Rolling Stone any time soon. But it’s worth it to get a Blackadder reference and a Game of Thrones reference into the same sentence.

[iii] Guess I won’t be getting that gig with Little Steven’s Underground Garage.

[iv] This reference is a shade obscure, but damn good.

[vi] Mind you, Auerbach looks like the type who can only poop in his own home toilet. 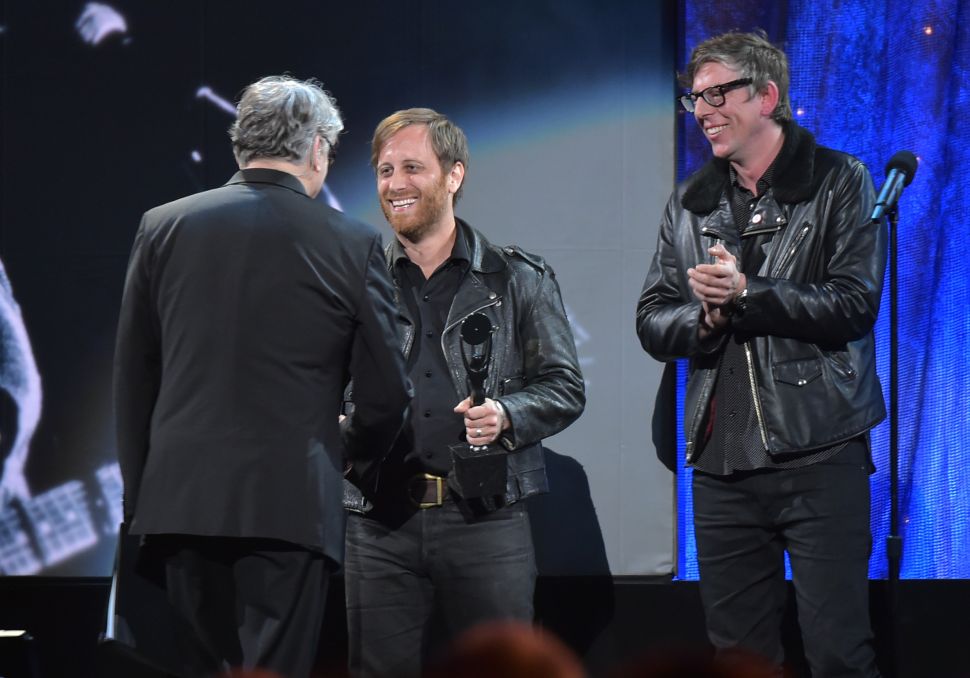