Perhaps, however, it is best to start at the beginning, as free speech has been nursing its wounds for some time now.

There is a perception that being liberal is synonymous with tolerance. As youth tends to spawn idealism, it would follow that the most liberal campuses are home to the most tolerant student body.

However, after nearly three years of study at Harvard Law School, I have found that a significant number of the most liberal students tend to be the least tolerant of opposing viewpoints.

In late 2014, during my second year at Harvard Law School, a student group called Students For Inclusion created a blog entitled Socratic Shortcomings. Its commitment, we are told, is to “[foster] productive and contextualized conversations on matters related to race, gender and class.” The site allows students—and anyone really—to post anonymously about events at Harvard Law School.

The site quickly picked up steam, as students gravitated toward a safe and faceless forum, where they could voice their displeasure. For a short while it appeared that the site might encourage open dialogue and actually inspire change.

However, soon thereafter, students began to complain about submissions vanishing into thin air. The moderators, we eventually learned, were selectively publishing submissions and denying others without further explanation. It seems that the Students For Inclusion only wished to include some students.

In the following weeks, the site quickly devolved into a means of anonymously shaming behavior on campus. Under the cloak of anonymity, SFI allowed some students to criticize their peers, without allowing for any means of rebuttal.

During the Fall of 2015, tensions began to mount and a student group, Reclaim Harvard Law, entered the scene. Its mission, then and now, is to “combat our school’s systemic racism and exclusion.”

In the following weeks Reclaim Harvard Law, in conjunction with Royall Must Fall (another protest group), opposed Harvard Law School’s seal. After months of protest the Harvard Corporation met the group’s demands and agreed to retire the law school’s seal, due to its perceived ties to slavery.

Reclaim Harvard Law also attempted to engage the administration by “occupying” the Law School’s Caspersen Student Center, a common area on the first floor of the law school. For those unfamiliar with Harvard Law School’s campus, Caspersen sits adjacent to Wasserstein Hall’s main entrance and classrooms. It is a regal room, with high ceilings, leather couches and two fireplaces.

For the past few months the members of the occupy movement have renamed Caspersen to “Belinda Hall” and made it their home. The walls are covered with signs of protest and the furniture has been rearranged to make room for air mattresses. Some protesters sleep on these mattresses, while others have rearranged couches into makeshift beds.

While the occupy movement has held a steady presence in Caspersen, the room did receive a reprieve over spring break. The decision of the group to halt its protest over spring break led one student to exclaim, “I guess conviction went on vacation.”

Student backlash to the occupy movement has been led by a handful of students. One of the most vocal members of the opposition is Bill Barlow, a third year law student.

They appear to be so enlightened, and yet, they are used as a justification to stifle free expression when it conflicts with his point of view.

In the early portion of the morning, Mr. Barlow entered Caspersen and began to attach signs criticizing Reclaim Harvard Law. Although I try to refrain from entering Caspersen for extended periods these days, I happened to be in the room at the very moment Bill posted his signs.

The first sign read, “RECLAIM HARVARD LAW = Suppression of Free Speech.” Amazingly, the signs then took on a prophetic nature. Within minutes of their posting, members of Reclaim Harvard Law suppressed Bill’s right to free speech by ripping down the signs (video). I wonder if Reclaim appreciated the irony. The next day I learned that members of Reclaim Harvard Law also removed other students’ signs.

In an email on April 1, Dean Martha Minow affirmed the administration’s “commitment to the values of free exchange and free speech for all members of the Law School community.” Allow me to commend her for doing so.

In the Harvard Law Record, an independent student newspaper, Stephen Silva, a 3L, refers to Reclaim Harvard Law as “bullies.”

In another Record article, Lindsay Church provides an account of the event, as well as a telling quote from AJ Clayborne, a Reclaim Harvard Law organizer. “Belinda Hall has been reclaimed by Reclaim HLS for the purpose of creating an anti-racist environment for all and, accordingly, has a new governing body to protect that cause in a way that the institution’s existing structure, including DOS, has not.” Mr. Clayborne stated. “Anything that violates anti-racist values has no place in Belinda Hall.”

His words are perplexing. They appear to be so enlightened, and yet, they are used as a justification to stifle free expression when it conflicts with his point of view.

This episode is reminiscent of a First Amendment question posed by Harvard Law Professor Noah Feldman in a recent Bloomberg article, in reference to protestors at Donald Trump rallies. Mr. Feldman asks, “When a speaker, such as the Republican presidential candidate, is confronting angry protesters, whose speech rights come first: the speaker’s or the protesters’?”

Ultimately, Mr. Feldman explains that Supreme Court precedent is clear: “Protesters who disrupt a rally can be removed by police so that they don’t exercise what’s called a heckler’s veto over the rally’s organizer.”

The heckler’s veto is currently prevailing at Harvard Law School. But tolerance does not belong to the group who limits its definition. 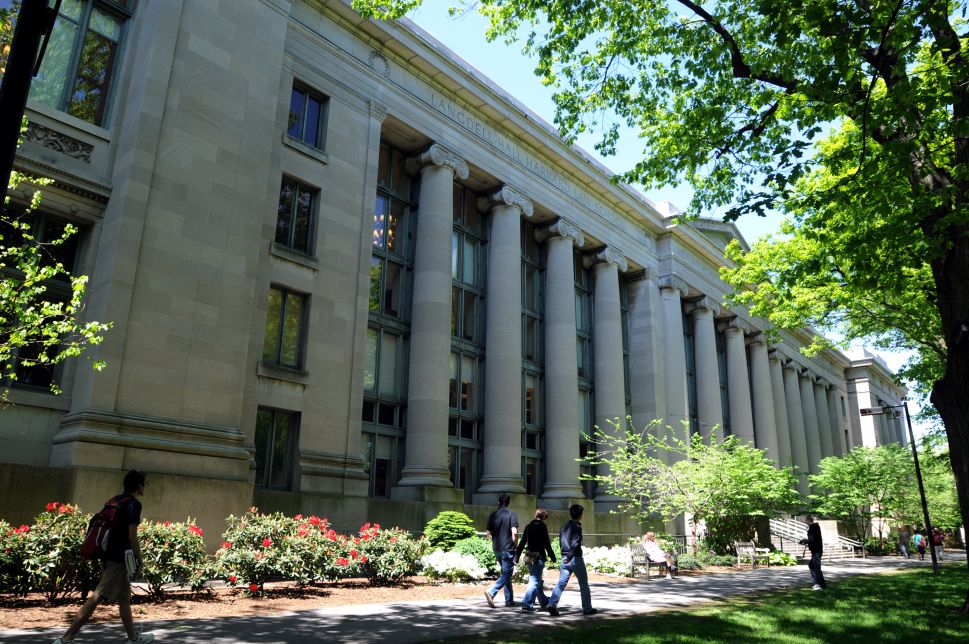