Trevor Noah’s question to Congresswoman and Democratic National Committee chair Debbie Wasserman Schultz, asking her about allegations the DNC has rigged the Democratic nomination process in Hillary Clinton’s favor, got a boost on the way to viral status by his choice of language: “A lot of people feel… Bernie’s being cock-blocked by the DNC.”

But the real reason the recent segment from The Daily Show became a trending topic on social media is because the accusations are true—the DNC has favored Ms. Clinton over Sen. Bernie Sanders. And Ms. Wasserman Schultz—who has faced criticism for limiting the number of debates in the primary cycle to shield Ms. Clinton, and for setting up a joint Super-PAC with the Clinton campaign—didn’t help herself with her poor and pretentious response.

After the audience’s laughter over the question subsided, Ms. Wasserman Schultz launched into a dodge that took Mr. Noah’s colorful verb and cut it in half: “You know, as powerful as that makes me feel, I’m not doing a very good job of rigging the outcome or blocking anyone from being able to get their message out.”

She is right: Ms. Wasserman Schultz is doing a poor job of using the DNC’s machinery to favor Ms. Clinton, since Mr. Sanders is surging in momentum and has six wins in the last seven contests, including in Wisconsin on Tuesday. Her inability to deliver results in her outcome-rigging efforts owes a great deal to the downward spiral of her public image.

The truth is that the best thing for the Democratic Party would be to knock Ms. Wasserman Schultz out—for good.

Regardless of whether Mr. Sanders or the DNC’s darling wins the Democratic nomination for president, Ms. Wasserman Schultz is a relic of corrupt party politics who simply needs to go for the good of the Democratic Party’s future. Under her watch, the Democrats got trounced in the 2014 midterms, and if she continues to set a poor example at the DNC’s helm, the party will not genuinely represent the progressive and liberal ideals of its grassroots supporters. Until she’s voted out of office, those ideals will fall by the wayside in favor of the interests of party leadership and those of wealthy donors.

Thankfully, for the first time since the Florida Democrat entered Congress in 2004, a challenger has stepped up to challenge Ms. Wasserman Schultz this year. Tim Canova has utilized Mr. Sanders’ supporters’ disgust with Ms. Wasserman Schultz to his advantage, as has raised more than $550,000 in the first quarter of 2016—all from small, individual contributions. He, like Mr. Sanders, has made a pledge to not accept any corporate money or support from a Super PAC.

In this light, Ms. Wasserman Schultz’s appearance on The Daily Show should be seen as a desperate attempt to repair her broken image. Mr. Canova’s primary challenge effectively means that her entire career depends upon Ms. Clinton winning the nomination. The Democratic Party and Ms. Wasserman Schultz would be best suited if she refrained from making major media appearances, as they don’t help the image or viability of the party. Her comments have sparked further criticism of herself and her party, such as when she told Jake Tapper in a CNN interview following the New Hampshire primary that the superdelegate system is designed to ensure grassroots activists don’t run against establishment Democrats, like Ms. Clinton. By appearing on The Daily Show, she opened herself up to this same issue in a high-visibility interview (and again defended the undemocratic system).

In addition to her lack of impartiality in the Democratic primaries, Ms. Wasserman Schultz has taken heat for her position in favor of payday lenders over consumers and the legislative efforts of fellow Democrats, her opposition to a medical marijuana bill that most of her constituents in Florida support, and her decision to rescind a ban enacted by President Obama to keep federal lobbyists from using money to essentially take over the Democratic Party. Her political career has been built on financing from corporate influences, and it is a career that symbolizes the resentment millions of Americans have to politics as usual in America. 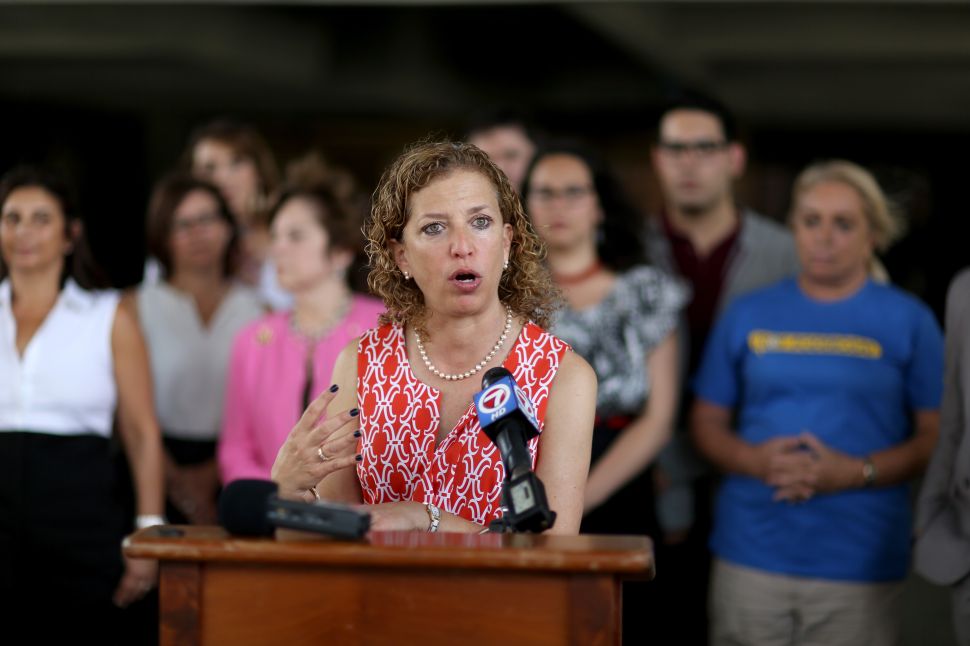