“Of course Donald Trump should win the GOP nomination even if he doesn’t come to the convention with a majority of delegates. He’s won way more votes than anyone else, won way more delegates than anybody else. It’s only fair.”

Assuming you’re not a committed follower of Mr. Trump, or an enthusiastic member of the #NeverTrump movement, what’s the right answer? More fundamentally, what’s the fairest way to decide who should win an election? If you look at the way elections are actually conducted, here and in other free societies, the only real answer is there isn’t any one answer. There is a bewildering array of options, including some that are blatantly “unfair” but are fundamental elements of the American political system. Indeed, it’s “fair” to say that without some of these remarkably “unfair” rules, there likely wouldn’t even be a United States of America.

‘It’s not just at the coming GOP convention where questions about what’s fair arise. Indeed, they can be asked about a raft of our election rules.’

Until the birth of the modern presidential primary system after the tumultuous 1968 Democratic convention in Chicago, the whole notion of voters choosing the nominee was a fantasy. The great majority of delegates went to conventions unbound, except by ties to their local political leaders. Over several days and several ballots, these leaders built a rough consensus about who should lead their party into battle. Those who led the first ballot often wound up on the losing end of the nomination contest.

In 1968, Hubert Humphrey won the Democratic Party nod without entering a single primary, but that contentious convention marked a turning point for presidential politics; since 1968, Republican and Democrat nominees alike have captured a majority of delegates through the primaries.

But what happens—or more accurately, what should happen—if Mr. Trump arrives in Cleveland with a plurality (more delegates than anyone else) but not a majority? After a first ballot, most delegates are free to abandon their pledges. If the polls show that Mr. Trump would be a weak general election candidate, or if he has committed more verbal gaffes in the lead-up to the convention, his delegates have the freedom to support another candidate. But is that what Mr. Trump’s voters would want? Many have chosen Mr. Trump because he appeals to them in a way no other candidate has; they might well prefer the delegates to stick with their candidate until the bitter end (and it will be bitter given the tenor of this election). Your answer about what they should do will depend not only on your feelings toward the candidate but on your sense of how a political party should act.

But it’s not just at the coming GOP convention where questions about what’s fair arise. Indeed, they can be asked about a raft of our election rules. For instance, in most statewide contests, whoever gets the most votes wins. (In 2014, nine governors were elected without winning a majority of the vote). But some states provide for a “second round” if no one gets 50 percent of the vote. Georgia and Louisiana hold runoff elections. Without that process, Senator Mary Landrieu would have won another term, finishing first in the multi-field primary. In the runoff, Republican Bill Cassidy decisively defeated the Democratic incumbent. Sometimes, it’s clear that the lack of a runoff has resulted in the election of candidate rejected by the majority of voters. (Back in 1969, New York Mayor John Lindsay won reelection with 42 percent of the vote against two conservative opponents. A year later, James Buckley, running for Senate in New York on the Conservative Party line, was elected with 38 percent of the vote, besting two liberal foes that split the vote.)

California has tried to resolve the “minority winner” conundrum with a sharp departure from the past. Candidates for statewide and Congressional offices participate in a “blanket’” or “jungle” primary—everyone regardless of party is listed, and the top two finishers face off in November. Proponents say this forces candidates to appeal to the middle instead of the fringes of the electorate. Foes note that it deprives voters of registering disaffection by voting for a minor party when it counts.

Trickier questions arise at the peak of our political pyramid—in the way we pick a president. As evidenced by the 2000 election, a candidate can win the White House even though his opponent receives more votes; that’s because you win the presidency in the Electoral College with each state’s voting power calculated by counting the number of its Congressional districts, plus two Senators. In all but two states—Maine and Nebraska—it’s a pure winner-take-all battle. Barack Obama won Florida in 2012 by less than 1 percent of the vote, but he won all of the state’s 29 electoral votes. He lost North Carolina by 2 percent, but Mitt Romney got all 15 electors.

This method of allocating electors has produced some eye-opening results. In 1992, third-party candidate Ross Perot got 19 percent of the vote—the best showing for such a candidate since former President Teddy Roosevelt won 28 percent back in 1912. But Mr. Perot did not win a single electoral vote. By contrast, George Wallace won 13.5 percent of the popular vote in 1968, but because his strength was concentrated in the South, he won five states and 46 electoral votes and came agonizingly close to deadlocking the Electoral College.

And had he done so, the nation would observe a method of choosing a president that fairly reeks of unfairness. The House of Representatives chooses among the top three electoral voter finishers with each state—not each House member, each state—getting one vote, calculated by polling each delegation. (A candidate needs an absolute majority—26 states—to win).

What this means is that Wyoming, with a population of 582,0000, packs the same political punch as California, with 38 million people.

Why do we put up with such a system? For that matter, why should those small states exercise the same power in the Senate as the most populous states?

Because we wouldn’t have a country without these rules.

When the framers were meeting in Philadelphia back in 1787, the smaller states were gripped by fears of domination at the hands of their larger neighbors. Indeed, they were so concerned with protecting their political power that the one part of the Constitution that may not be amended is each state’s right to equal representation in the Senate.

The one solution to many of these issues is the idea of a runoff, in one form or another. For instance, a national nominating convention with multiple candidates winning first ballot votes, like the forthcoming Republican contest, could adopt a rule that after each ballot, the candidate with the least votes is dropped, until only two remain. A Constitutional amendment could create a presidential runoff; if no one has an electoral majority, a second election between the top two finishers would take place a month later. In many countries, such as Australia and Ireland, an “instant runoff” system is used, where voters rank candidates in descending order of preference; if there’s no majority, those “second choice” votes are distributed until someone emerges with a majority.

As it now stands, unless Mr. Trump can garner 1,237 delegate-votes—or come within a hairsbreadth of that majority—Republicans will come to their convention facing a choice that will ensure cries of “unfair!” from whichever side loses. And which ever side that is, they’ll have a reasonable case. 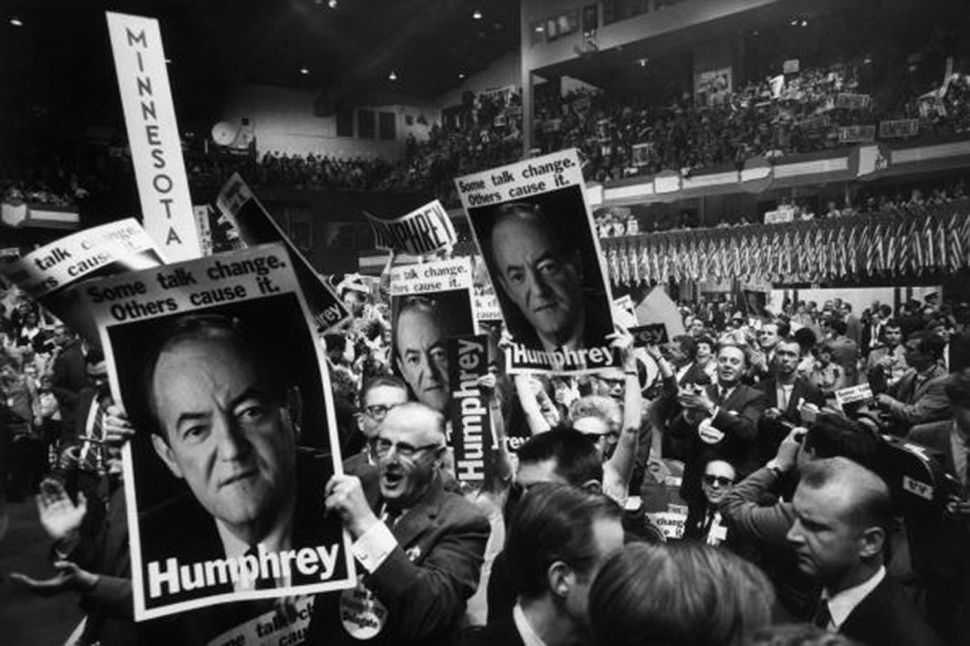