Though Joe Bradley’s rise to art-world prominence might seem meteoric to some, it was actually a measured journey. The staunchly pre-Internet artist seems to relish in long looks and carefully considered relationships in the studio, making him one of those storied “painter’s painters” that you read about in books.

Boxes of albums and American Spirit cigarette boxes complete the scene in his Navy Yard studio, which was also chock full of gorgeous and ramshackle paintings, many of which were about to be shipped over to Larry Gagosian’s Madison Avenue space for a show opening April 2.

Bradley emerged over a decade ago from a group of talented painters showing at the Lower East Side gallery Canada with a series of grouped canvases that tended to resemble simplified and severely geometric people or objects (sometimes referred to as the “robot” paintings.)

Infused with equal doses of humor and melancholy, these vexing artworks eventually propelled Mr. Bradley to the Whitney Biennial, after which he immediately changed course, opting for a new style of raw, linear “stick figure” style drawings that both mystified and and thrilled his fans. A show at the respected gallery Gavin Brown’s Enterprise followed, and now, he’s taking on the challenge of Gagosian’s rarefied climes.

He took a moment from his mad schedule to speak with the Observer about nostalgia vs. anxiety, double albums and the mysteries of Charlie Rose.

There’s a thread in your work of “nostalgia”, for lack of a better word, that feels important. Does that play into what you’re thinking about in the studio?

As a person, I don’t think I’m nostalgic for any particular era, but I do think that things are getting kind of worse and worse (laughs). I don’t know, “nostalgia” feels a little trite, but I do feel like there’s a sense that we’re losing something very important; something that we possibly can’t recover. So I think that “anxiety” is in the work—at least, I assume it is because it’s in my head.

When you say “things” are getting worse, are you talking about “art”? Or do you mean that the whole world is going to shit?

I don’t think that art is necessarily in bad shape. I wouldn’t devote myself to it if I thought it was a dead language. I don’t know… I listen to Sam Cooke and think “why can’t we do that anymore?” It just feels like there’s some sort of emotional register that we can’t access.

I understand what you mean, but I think in painting, having such a long history, one can pick up a thread that’s 50 or 60 years old, but it doesn’t feel like an antique idea. Painting moves much slower than say…

(Laughs) right. So, yeah, it doesn’t really feel inappropriate to look back.

It’s sometimes put upon your work that it’s arch; meaning that a Bradley isn’t just an abstract painting, it’s referring to a period of abstract painting. But I disagree, particularly with this new work which seems to have a very earnest and “searching” quality to it.

With the modular works, the reaction was always like “well, he’s sort of taking the piss out of Minimalism,” which was partly true. But I think there’s a lot more to it. And the same with the last few shows. Sometimes it was “Bradley does Ab Ex” and you want a deeper read than that, you know? I don’t think that I make art about art. I just don’t think about it like that.

You had a short lead time on this show, right? And on top of that, you moved in this new direction.

We set a date for this show in September. I really sort of just locked myself in a room and did it. it was kind of a thrilling show to make because it’s unfamiliar territory, and I didn’t really have any idea of what it was going to look like when I began. I made some decisions about scale and material. I knew that I wanted to work with a brush (laughs).

That’s a big change coming from the oil bars.

Yeah, you know sometimes something just doesn’t work. I don’t know, something about it doesn’t feel correct…

Have you figured out what’s going into this show?

The show at Gagosian is two rooms; there’s one room that will be a suite of these sort of black paintings that you see on the wall and the other room will have drawings and sculptures. I’ve never shown my sculpture in New York.

So we’re getting the full Bradley—painting, drawing and sculpture—the classic triad.

Nice. And how has it been working with Gagosian?

Did Larry actually come to the studio and meet with you and talk about the work?

Oh yeah, he came by a few times.

Did you feel that “wow, this guy actually kinda gets it”?

Yeah. You get the sense that Larry really cares about painting.

It’s good that you didn’t have to jump right into that massive 24th street Gagosian space.

Yeah the space at 980 Madison is relatively modest in scale. It’s a great room. My last show in New York was just too big. It was like a “double album,” you know? After the fact, you think  “maybe I could’ve said it all with one record?” (laughs).

It seems like you’ve been doing the co-representation thing for a while now. Is that a way of just trying something new while sticking with your original reps? Or  a way to get more eyes on the work?

I don’t know. I mean, every time I talk about this sort of thing, it’s just a pain in the ass for me. I’d rather just avoid the subject.

Ok, that’s fine. I guess I have to ask you about the market stuff, though. I’m not an expert…

Oh well, you’re in luck, because I am (laughs).

Oh good! It seems like the auction stuff over the last couple years has heated up for you. You’ve broken your own auction record a bunch of times. Is that something you pay attention to?

Does it ever bum you out when you see something you maybe shouldn’t have let out of the studio when you were younger?

It doesn’t bother me that much. It’s kind of fun to watch [auctions] and it’s flattering, but ultimately it’s out of my hands.

Ok, back to painting. The works in this new series seem to really inform each other. Is it part of your process to jump from painting to painting when you work?

When I’m working on a show, I tend to work on everything simultaneously. I’m thinking about the room and the way the paintings play off each other. Then one painting will sort of jump ahead of the pack, and the rest have to compensate a bit.

But then that frontrunner could end up being your least favorite by the end, right?

Or there’s the opposite. “The stone that the builder refused.” Every once in awhile, there’s one that’s just like “the dog” that ends up being the best.

It’s interesting that you brought up the commonality of the color black in these paintings. Is that something you went into this series wanting to do?

Not really. I think one painting sort of ended up with a lot of the black, and then it sort of infected the rest of them. But I think there’s something, on the one hand, that lends an exaggerated weight to the paintings, and there’s also something kind of theatrical about it. Do you ever watch Charlie Rose? I was watching some old episodes, and you know how it sort of looks like he’s in outer space? I don’t know… I’m still sort of digesting these.

I think Motherwell comes up as an artist who used black for theatrical effect.

I’m having a hard time visualizing what a Motherwell painting looks like.

He did the “cock and balls” paintings in black and white. The Elegy to the Spanish Republic ones.

So I take it you’re not thinking much about Motherwell in your studio but are there artists that you do think about?

Yeah, sure. I think Guston looms large in this show. I don’t know if it translates visually but he’s been on my mind.

Do you feel like you’re going for an inscrutability when you paint? Is that your goal? To keep the viewer—or yourself—wondering about a painting?

That’s in there for sure. I think it hopefully escapes language and kind of stops a linguistic read. I don’t think the idea is to be evasive or tricky, but I think one thing that painting does well is to broadcast contradictory content in a single view, as opposed to a book or movie that leads you through. Good painting sort of stops time and jams up the works—in a good way. 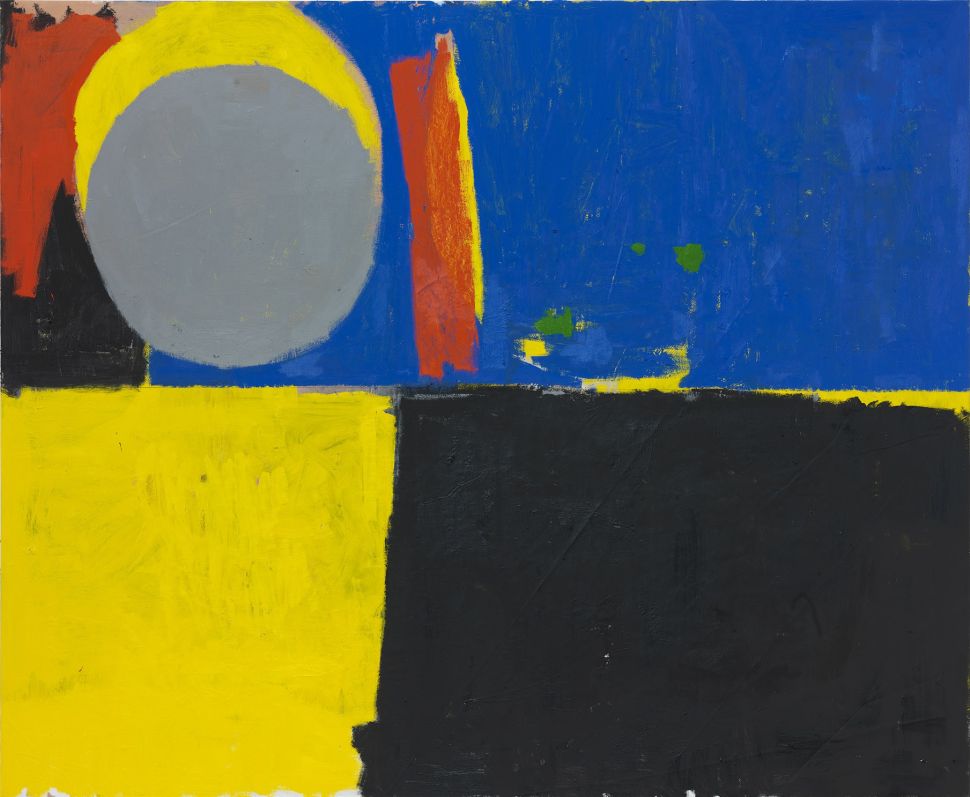