This primary season is the first in modern times in which candidates and their supporters from both major parties, specifically Donald Trump and Bernie Sanders, have raised doubts about whether the nominating system is rigged. The nominating system for both parties is undeniably complicated and confusing. Our primary system is, by most measures, no way to nominate a major party candidate for president, but it is much less clear that the system is deliberately rigged in favor of one candidate or another.

Some of complaints from both Mr. Trump and Mr. Sanders make sense while others seem less reasonable. For example, Mr. Trump’s frustration that delegates in some states, such as Colorado, are chosen with no attention to voter preferences, is not difficult to understand. His demand, however, that he should be given the nomination even if he comes to the GOP convention without the 1,237 needed for nomination is less convincing. The notion that a party should find a candidate who can win the support of at least half of the delegates is not unreasonable.

Mr. Sanders protests the corrosive effect money has on our political system. This is also a reasonable position, drawing attention to an issue that, while perhaps not decisive in this primary, has helped stymie progressive legislation for decades. The Vermont Senator has also complained about the role of unelected superdelegates, but his critique is undermined by his more recent efforts to court pledged delegates.

Both Mr. Sanders and Mr. Trump, and their supporters, bolster these arguments by even more vague assertions that they should win the nomination. The Sanders campaign contends that the recent primaries won by Mr. Sanders should count more because they demonstrate momentum, while the states he lost badly should count less because he lost them so badly, or didn’t try hard there, or something like that. This kind of magical thinking is not that unusual in political campaigns, but when married to a narrative of rigged elections, it is nefarious and destructive. Mr. Trump, for his part, is just as vague, but more adamant in his assertion that to deny the candidate with the most votes the nomination is unjust.

The accusations by Mr. Trump and Mr. Sanders are getting traction among voters, a trend that could be very detrimental to our democracy. The ease with which voters seem to believe the system is rigged has not, however, emerged out of nowhere. Young voters today, have grown up in the long shadow of the 2000 Bush-Gore election. That year a highly disputed tally of the Florida vote concluded only when the Supreme Court ruled that the counting should stop before all the ballots were counted, effectively giving George W. Bush the presidency.

At that time, politicians from both sides of the aisle rushed to congratulate Americans on how peacefully we accepted this disputable decision, viewing that acceptance as evidence of the strength of our democracy. However, the legacy of that 2000 election was not, as many optimists hoped at the time, a renewal of faith in the strength of our political institutions. Rather, the legacy of 2000 is that many Americans became aware that the problems of our elections, until that time perceived as peripheral or the fodder for jokes about cities like Chicago, were real and that election fraud was not something to which America was magically immune.

The realities that Mr. Trump may come up a few delegates short of a simple majority and will have to fight for the nomination, or that Mr. Sanders never really built a broad enough coalition and is losing the nomination fairly, would be a lot harder for the campaigns to ignore if the legacy of the 2000 election did not endure. 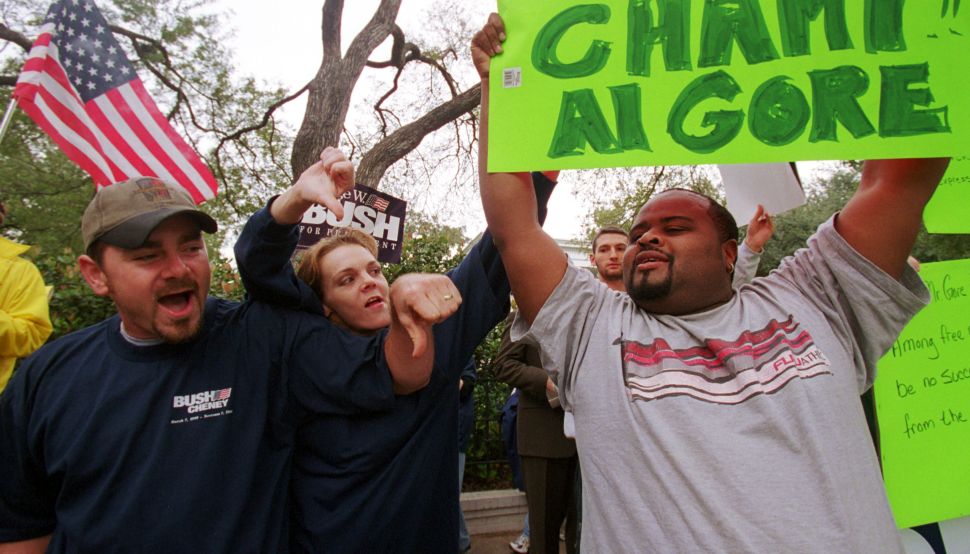