Penny Dreadful is a fucked up show. Being on a premium cable network, it’s not beholden to the dubious standards of “good taste” and “family friendliness” that certain basic cable shows are forced to adhere to, lest they be systematically and relentlessly destroyed via everyone at the network basically covering their eyes and pretending the show isn’t on at all (here’s lookin’ at you, Hannibal!).

This Gothic supernatural drama also has the distinction of being one man’s vision. Penny Dreadful is John Logan’s beautiful, lavish, fucked up baby—he created the show and has written every episode of the series to date. That helps Logan’s vision to be the cohesive, tonally consistent, unrelenting phantasmagoria that it is.

Penny Dreadful is also straight-up one of the scariest shows currently on TV, rivaling the oft-grotesque WTF-ery of Ryan Murphy’s anthologized behemoth, American Horror Story. The Showtime original is returning this Sunday, May 1 for its third season premiere, so in honor of that, here are all of the most deliciously fucked up moments in the series so far.

Eva Green literally bends over backwards for that Emmy, comes up empty-handed

The fact that Eva Green has won exactly zero tangible awards for her role as Vanessa Ives is almost beyond comprehension. I am not exaggerating when I say that I can’t watch this scene without every single light in my home being turned on first. In Madame Kali’s first appearance, Vanessa and Sir Malcolm attend a séance where Vanessa is possessed by an ancient something (god? demon? ghost? It all kind of blends, on this show). She channels Sir Malcolm’s son Peter and the demon/ghost/god in turn, taunting Sir Malcolm and profoundly disturbing all of Ferdinand Lyle’s party guests by contorting out of shape. The voices, the hissing, and the body movements—all of it is maximally unnerving. Though I never quite understood how nobody bolted for the door throughout the many minutes that this whole thing goes on… but that’s just me.

Vanessa, still possessed, finds a sailor in an alley and immediately has sex with him

A sailor. A random sailor on the streets of London. I get that she’s possessed, but doesn’t whatever’s possessing her care about all of the many horrific sexually transmitted that sailors of this time were likely carrying?!

Oh, Proteus. Sweet, round-headed lil’ Proteus. He was so simple and not morally complex and we were all watching, wondering how he would become the tortured, violent creature of the source material. And then he got punched through the chest and ripped in half. And it all made sense. Bonus points for this moment also being one of the greatest character introductions I’ve ever seen.

This, on its own, is not so fucked up, but then you realize that the fiancé is this guy, with this douchetastic mustache and that hair:

In theory, this moment makes sense—Vanessa’s sublimated desire for her best friend and her jealousy over Mina making a match (paired with seeing Sir Malcolm boning her own mother) propel Vanessa to make this terrible sex decision. But still. Gross.

Historically, mental institutions at this point where not very chill places to be. As such, all of the “treatments” Vanessa undergoes in an attempt to cure her psychological ailments—ice baths, hosed down with freezing , holes drilled in the skull—are terrifying and horrible.

Confined to her bed after her time in the institution, she has creepy invisible sex with the Master—while he looks like Sir Malcolm. Given that Sir Malcolm is something of a father figure to Vanessa, and given that she saw him boning her mother shortly before this, and also given that she’s aware this is a demon and not Sir Malcolm, it’s all extremely fucked up. Bonus WTF-ery points for how sexually alluring Timothy Dalton is in this scene. It’s very not okay.

Vanessa, possessed again, bites a piece of a priest’s cheek off

After trying to exorcise Vanessa for an entire episode, the group calls in the big guns. Possessed Vanessa taunts the priest before very suddenly ripping a chunk out of his face with her teeth and then springing up onto the ceiling like a damn possessed Spider-Man. Who saw this coming? Nobody.

Victor Frankenstein smothers Brona, reanimates her, has sex with her, all the while telling her that she’s his cousin

This can all be grouped together because the entire Brona/Lily storyline prior to her reclaiming her agency (evil agency, but still… agency) is basically one huge “Ew! What the fuck!? Ew!” No one can argue that Frankenstein isn’t a little weirdo. He’s definitely not all there in the head, what with killing a woman on her death bed, defiling her body to create a mate for his unstable, whiny creature, and then having sex with her, knowing he’s done all that and knowing she’s an actual corpse. Victor may argue that he loves “Lily,” but the whole thing is still a giant mindfuck—and the not-so-good doctor definitely needs to get out more.

There is just so much wrong here. The evil, ancient witch formerly known as Madame Kali sends out her minions (a.k.a., her pale, bald, naked witch “daughters”) under the cover of night to slaughter unsuspecting parents and steal their infants. Then, she butchers said babies, using their organs to magic these ridiculously creepy, all-too-lifelike puppets to life—so that they can be used to torture her victims (like that poor sad-sack, Mrs. Murray). Baby-butchering, voodoo, and creepy puppets: it’s like a trifecta of terror. Can’t get much more evil than that, so kudos to you, Ms. Evelyn.

Evelyn kisses Hecate on the mouth for just slightly too long

Literal daughter or figurative daughter, those on-the-mouth kisses are incredibly strange. The other daughters also give Evelyn full-body massages. Errrr…

The Cut-Wife is burned alive

It’s horribly graphic, long and draw-out. Hot oil is thrown on her, poured over her head, and she’s set aflame by one of the girls that she helped out with an elicit abortion. Ugh. It’s one in a long line of traumatizing events that Vanessa is forced to witness.

It’s just Vanessa’s hallucination, but the visual of torrents of blood raining down on the unsuspecting dancers is memorable, grotesque, and really, really messed up.

Lily has sex with a portly older gentleman and strangles him

These poor dudes think they’re in for the night of their lives… little do they know, this pretty little blonde is about to straight up murder them using her amplified reanimated corpse strength.

The reveal of Dorian Gray’s painting

We don’t see it until close to the end of the second season but when we do, it’s fucking horrifying and well worth the wait. The painting is of a decrepit little demon-looking thing in chains, and it twitches right after Dorian murders his unsuspecting sweetheart of a girlfriend, Angelique. Dorian, you scoundrel.

Vanessa confronts the Vanessa replica doll through which the demon speaks, verbally kicks its ass

Talking dolls are one thing. Talking dolls through which the devil uses Eva Green’s voice to speak are another thing entirely. Talking Eva Green-voiced devil dolls that crack open and spill out hundreds of live scorpions are basically unbearable. Nightmares. For. Days. The epic badassery of Vanessa spooking both Evelyn Poole and the actual flippin’ devil, defeating the demon by chanting in verbis diablo, only amplifies the delirious fucked-upness of this moment. 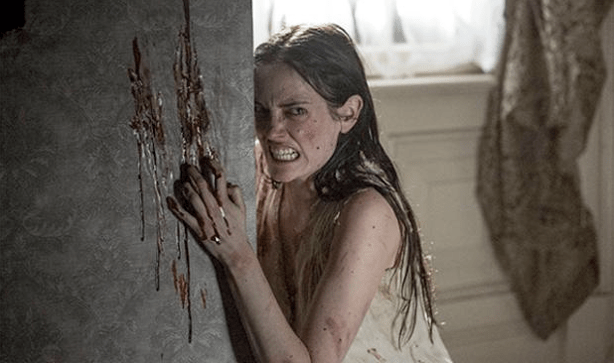