The college admissions process is stressful, often absurdly so. It is also unfair—but not in ways that most people realize—and certainly not in ways that most parents, college administrators and policy-makers would agree on. As the process draws to a close for the high school class of 2016—and is just kicking into high gear for the next group of anxious kids and parents—it makes sense to dispel some myths surrounding the mysterious process. Many of the pressures are familiar. But others are very new and particularly virulent, fueled by news reports that there is a kinder, gentler college admissions process just over the horizon.

The college admissions process is going to be just as stressful as it has been for years. And it will likely include some refinements that will make the playing field even less fair—especially for middle-class families.

But “Wait!” you say. “What about this report that came out of the Harvard Graduate School of Education? Didn’t it recommend making the SATs optional, de-emphasizing AP courses and banning the ‘laundry list’ approach to extracurricular activities? Wasn’t the report endorsed by 85 college administrators?”

Indeed it was. Yet it probably won’t make a difference for most kids or their families. Here’s why.

The current admissions system maintains the status quo, much to the pleasure of the college-industrial complex: lots of students apply for a relatively small number of openings at each school. That basic economic truth—great demand, limited supply—helps prop up ridiculously high tuition. And in turn, that outrageous tuition fuels the craziness to get into “top,” then “better” and finally “good” schools.

Here’s how it all works.

Public universities charge roughly $100,000 for four years’ tuition and fees for out-of -state students; private colleges average $200,000. “Selective” schools, such as Stanford and Columbia, typically charge more than that, and the average time to graduate has risen to 5.6 years. So most families pay more than those four-year figures. And the costs continue to rise. Since 1978, college tuition has gone up 1225 percent, nearly twice the rate of the rise in health care costs, reports Bloomberg. Colleges have pushed tuition sky-high because they can.

Give the significant investment, parents and kids are perfectly rational in asking where they are going to get the best return. One valid measure of that ROI is a college’s “brand value.” And a simple—indeed overly simplistic—measure of brand value is a college’s ranking. So, when families flock to those schools with higher rankings—creating more competition for a limited number of freshman spots—it is a very rational decision.

Thus the craziness to get into “name” schools.

In 1983, when I co-wrote the first edition of Getting In, Yale’s acceptance rate was 25 percent; last year it plummeted to 6 percent. In reality, it was actually lower: just 4.6 percent when you eliminate the 16 percent of the class—mostly recruited athletes—who were admitted via the school’s early action program.

A nod to New York Times columnist Frank Bruni and his book, Where You Go is Not Who’ll You’ll Be, is in order. He is absolutely right. There are lots of very good places to go to college, get a fine education and enjoy a wonderful four years. And many of those are not the best-known, most selective schools. Moreover, a kid’s future happiness or success is not a function of having a diploma from a highly ranked school. Sadly, Mr. Bruni’s insight is not going to reduce the competition to get into “top” colleges.

When the Harvard Education folks recommended that colleges de-emphasize AP courses in the admissions process—limiting an applicant to just two or three APs—it was at once disingenuous, anti-intellectual, short-sighted, and above all, politically correct.

Selective colleges are not looking for the well-rounded applicant; they are looking to put together the well-rounded class. Schools want some athletes for every team, a few musicians and performers, a critical mass of favored minorities, a few “development prospects” whose parents could donate a building or two, and yes, some legacy candidates. And then, to fill out the rest of the class, the admissions officers seek smart kids to fill each academic department.

Despite the energy with which they deride the many faults of both the SAT and ACT tests, college admissions officers use them as a quick measure. But they do not necessarily reveal smarts or predict how a kid will do freshman year (the long-standing claim of the College Board, which administers the test). Instead, the tests indicate an applicant’s general educational “background” and how hard they prepared for the test itself. After all, it is one of the few standardized measures across thousands of school districts and high schools with differing standards.

The other common denominator of academic rigor and achievement is Advanced Placement. The curricula and tests don’t vary from high school to high school. College admissions officers love to say, “We want to see kids take the toughest courses available to them.” Unspoken, they would also add, “And get A’s.”

So when the Harvard Education folks recommended that colleges de-emphasize AP courses in the admissions process—limiting an applicant to just two or three APs—it was at once disingenuous, anti-intellectual, short-sighted, and above all, politically correct.

Three objectives prompted the Harvard recommendation: to reduce the pressure on kids to work late into the night on homework for multiple AP courses; to lessen the admissions disadvantages of kids who live in economically poorer school districts that don’t offer as many AP courses; and to encourage all kids to spend more time volunteering in “meaningful” community service activities.

In an increasingly competitive global economy—where foreign students regularly score better than Americans on international tests—do we really want to be de-emphasizing intellectual rigor? I don’t think so. Nor do I believe that even if colleges say they want high school students to limit themselves to just three AP courses, they will ignore evidence of other academic achievements. Smart kids competing to get into top colleges will find creative ways to demonstrate that they are a little bit smarter and harder-working than the next applicant.

So Is the Admissions Playing Field Tilted?

Yes. Wealthier kids undoubtedly have an advantage. Their high schools are often better; their classes are usually smaller; they have access to college counselors who can “tweak” applications and essays; and they can afford private tutors—not just for the SATs but for everything.

Can College Admissions Be “Fixed”?

The process can be changed, but not be made perfect. Any adjustment that is likely to benefit one group is at the expense of another.

If colleges charged lower tuition, there would be less frenzy to get into the “best” schools and a greater focus on getting into the right-fit colleges. Unfortunately, with the exception of Purdue’s Mitch Daniels, few college presidents will freeze, much less reduce, tuition costs.

Colleges can adopt SAT/ACT test-optional admissions, and that might give the perception of reducing high school stress. But such a policy really only benefits kids with high GPAs—and the colleges themselves. The schools get to report higher average SAT scores for the admitted class. (Lower-scoring kids typically choose the no-reporting option.)

So while I’m generally skeptical about most reforms supposedly intended to make the college admission process less stressful or “more fair,” there are two steps colleges can take to alleviate anxiety and level the playing field a bit. First, more colleges should follow the example set by Arizona State’s president Michael Crow. ASU has very flexible criteria for admission. It is fairly easy to get in, but once you do, the standards are quite high. And as a result, ASU’s reputation is improving dramatically. I think of it as the Marine Corps approach: many can join, but only the few and the proud survive boot camp. And the combination of high standards and constant innovation yields prestige.

Second, colleges could encourage kids to take a “bridge year” (not a gap year) between high school and applying for college. The term was created by social entrepreneur Abby Falik and the very smart people at Global Citizen Year, the innovative program she leads with a mission to create meaningful service opportunities for students.

Colleges should tell kids they truly value a real commitment to community service, and the maturity that comes from spending time working in such endeavors. In return, applicants who spend two years after high school doing full-time AmeriCorps-type community or military service will get an admissions bump of one standard deviation when they apply.

Just as the traditional models of lots of businesses are changing, higher education needs to as well. ASU and Global Citizen Year are changing how we look at learning and service. When more colleges follow their lead, the process will become less stressful and more productive.

Steve Cohen is an attorney at KDLM, and the co-author of Getting In. 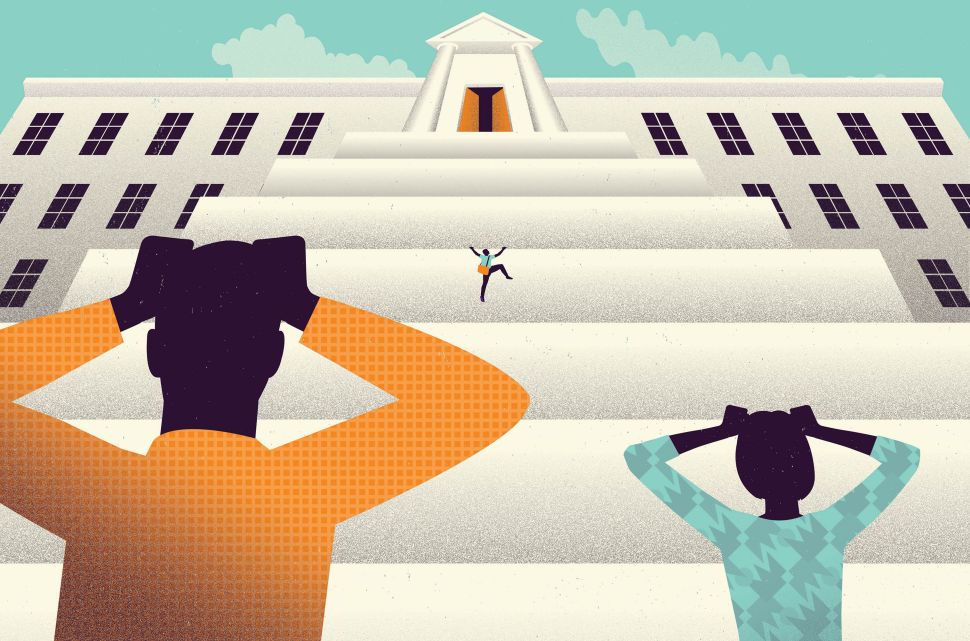