Cal Robertson comes more fully into view in “A Homecoming,” the first new episode of The Path following last week’s double-decker premiere. If you thought being in a cult warped Cal’s brain, here’s another fact for your diagnosis: His mother is a sad, charmless, drunk hermit played by Kathleen Turner. We sat down with actor Hugh Dancy, who plays Increasingly Complicated Cal, to talk about the episode.

“It’s a show about intimacy to a degree. The people on the show are seeking connection and truth and openness, though they’re not always succeeding.”

You are from the U.K., but I’ve only seen you in shows like Hannibal and The Path where you use an American accent. How did you work out your American accent?

Doing it for a living, I’ve gotten increasingly comfortable with it. I grew up in England, and we were heavily exposed to American culture as you can imagine, so it wasn’t such a huge leap.

And you’re married to an American [Claire Danes].

Yes. I think I was playing an American when we met.

The Path has a much more naturalistic sensibility than Hannibal. Does The Path use a smaller crew?

It’s not necessarily a smaller crew, but the shows operate much differently with the lighting and camera setups. On The Path, we’re using three cameras almost all the time with fairly minimal lighting. On Hannibal, the lighting — or, in some cases, lack of lighting — was much more stylized.

The Path feels like a much more intimate, personal show.

It’s a show about intimacy to a degree. The people on the show are seeking connection and truth and openness, though they’re not always succeeding.

And it’s a show about a family in the way that Parenthood and Friday Night Lights — Jason Katims’ two previous shows — were oriented around families.

That was noticeably absent in Hannibal. [Laughs.]

You are in Peru at the beginning of this episode, so you know that Dr. Stephen Meyer [Keir Dullea] is in a coma, and you tell a few fibs about that. Do you see that as Cal papering over some doubts or being an opportunist?

Cal knew as the season started that Stephen was potentially on his deathbed, so he’s convening at the beginning of this episode there with some of the 10R elders. They have gathered to hear the doctor say that we’ve run out of hope, but that’s not news to them. Cal is not somebody who ever had ambitions of leading the group and he is still a believer, but his original beliefs had Steve leading this group forever. The movement has saved his life, and he needs to bridge to a second generation. To do that he has to keep a lot of secrets, and he sees that as a selfless thing. As the season goes on, that will increasingly dovetail with his own drive and ambition.

The movement is not based on thinking Dr. Meyer is divine, right?

Not exactly. Steve told us that he would provide the 13 rungs that would be The Ladder to progress up until we get to The Garden, and the whole movement is predicated on that. The idea that he’s going to die from mundane causes before he finishes that is a major fault line. It undercuts everything we’ve understood.

“You need a fierce and vulnerable actress to play [Brenda Roberts], and [Kathleen Turner] has both of those things in spades. There’s no vanity about it.”

What is so disturbing to Eddie [Aaron Paul] about seeing Dr. Meyer in that condition?

Sarah [Michelle Monaghan] is talking to Mary [Emma Greenwell] in the first episode and says that Steve is off in Peru completing the final rungs and that he “lives in the light.” That is the line that has been propagated — that he’s reached this level of purity where he’s bathed in light and completing the rungs for their spiritual salvation.

So Eddie feels like he’s been sold some BS about that?

I don’t think he knows what he feels. When you live inside a belief system like that, just seeing Steve like that is not enough for him. He doesn’t think everything he’s been told is bullshit. It takes a while to process that.

Kathleen Turner plays your mother in this episode. Is this the first time you’ve worked with her?

I had not worked with her, but I had shared a train ride with her once. [Laughs.]

So did you see her on set before she was dressed out as the drunk mom?

We shot all of those scenes over a couple of days, so we didn’t have a lot of rehearsal time. You need a fierce and vulnerable actress to play that kind of part, and she has both of those things in spades. There’s no vanity about it.

Does she want you to take that drink because she wants you to give her something — to do something you don’t want to do — or was it more about getting you to admit something about yourself?

She knows that I have the same weakness that she does, and she’s using that, but mostly she’s trying to pull me back into her life. It infuriates her that I’ve chosen this other parent and this other life over her, and she knows that I’m just a drunk like her.

She explains some of your backstory that you went into the movement fairly young and not of her doing.

That’s right. The backstory is that my father was — like her — an alcoholic, but he extricated himself from that and took me to join this nascent movement. After a certain point, he got out and I was old enough to stick around.

So Steve Meyer then becomes your father figure.

Yes, he was very much my father figure.

“The real thing [Cal is] committing to is loneliness.”

There’s more discussion in this episode than in the first two about the various rankings in the movement. Cal is a 10R. Who are the other 10Rs?

Do we have enough evidence at this point to know why you would be a 10R and be so much younger than the others?

Cal grew up in the movement and essentially became Steve’s adoptive son. Cal and Sarah and Eddie were young stars in the movement, but Cal dropped away everything in his life that wasn’t related to the movement.

What are Sarah and Eddie’s rank?

Sarah is an 8R. When we see Eddie at the beginning of the series — when he’s on hallucinogens, by the way — he’s in the process of obtaining 6R. We talk more as the season goes on about achieving the rungs. There’s a book for each rung, and there are tasks for each rung. The writers’ room has a clear idea about that underlying structure, but you don’t necessarily see a lot of that.

In the case of Hannibal, the mythology was more the richness of the source material — the Thomas Harris novels — where here the mythology is the underpinnings. I think you could say the same of any good piece of writing. If you’re in a good family drama you’re only going to see the surface, but the actors need to know much more detail about the intricacies and dynamics of the family. I think that’s a quality of good storytelling.

You seem to downplay Cal’s messianic ambitions a bit. Do you think there’s not much evidence of that ambition?

When we shot the scene toward the end of this episode when I come back from Peru and break the news to her in a not-completely-honest way that Steve is working on the final rungs and invite her to recognize that I’ll be a leader, my reading of that was that he was acting out of the shock of the experience of his mother and coming back to where he began and fully committing to that.

The commitment that he’s making is ambitious on paper — he’s committing to the idea of being a leader, and that ambition will grow — but the real thing he’s committing to is loneliness. He’s signing off on never being able to share the truth of what is happening with Steve and everything that means to him, including the fact that he must have some greater doubts about the whole belief system.

Is that the source of the mixed signals he sends Mary?

I think the source of that is that he’s really drawn to her.

Is the implication that he should be alone?

He knows that the nature of his attraction to Mary is not a very elevated one. [Laughs.] Since his teens, Cal has basically been celibate. He’s got big self-control issues, and he has probably been very self-denying. He has also put Sarah on a pedestal and made her a symbol of purity and effortless virtue within the movement. He’s fighting the other side of his nature with Mary. 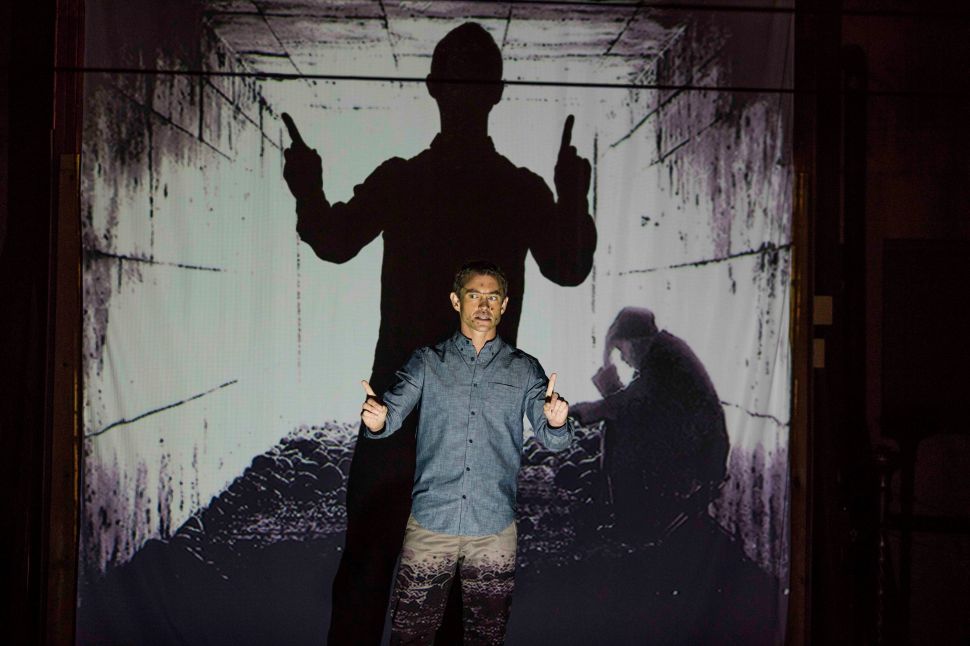